Dele Alli on Tottenham injury list: No time to get our violins out

Dele Alli insists there is "no time to get our violins out" over Tottenham's injury crisis ahead of Tuesday's Champions League clash vs RB Leipzig.

Spurs were dealt a fresh blow on Monday when Jose Mourinho confirmed Steven Bergwijn is unlikely to feature again this season with an ankle problem before the second-leg tie at Red Bull Arena, in which they trail 1-0.

The Netherlands winger has enjoyed a bright start in north London since arriving in January but joins a lengthy injury list including Harry Kane, Heung-Min Son, Moussa Sissoko and Ben Davies for the last-16 match.

"It's obviously very disappointing," Alli said. "But this isn't a time to try and sort of get our violins out, we have to step up.

"We have to deal with these situations. It is all a part of it, as disappointing as it is. But we have to show our character now as a team, the depth that we have in the squad. 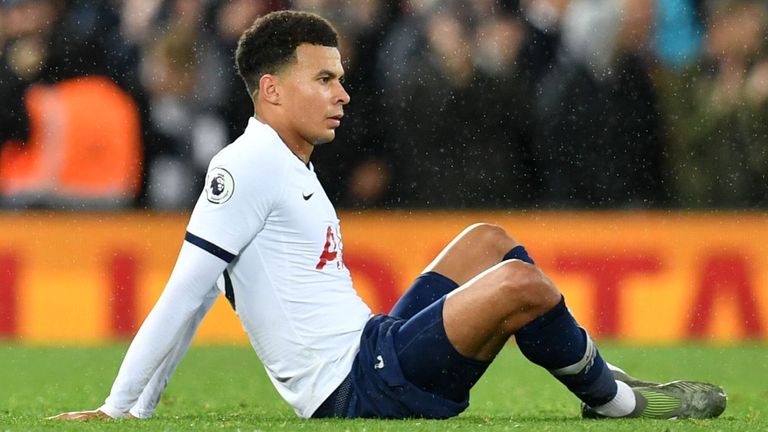 We have to deal with these situations. It is all a part of it, as disappointing as it is. But we have to show our character now as a team, the depth that we have in the squad.

"Everyone needs to step up - the players that maybe have not been playing as much, need to come through and show why they are here and take their opportunity."

Despite their injury nightmare, Spurs were handed a boost this week with Kane stepping up his comeback; pictured midway through a personal rehabilitation session as he looks set to return ahead of schedule.

The England forward has not played since sustaining a rupture on New Year's Day against Southampton - with Spurs team-mate Alli admitting the side "miss" him - but also warned against Kane returning prematurely.

"Harry is an amazing athlete and professional and obviously he has picked up a few injuries since I have been there and every time he recovers very well and you can see how motivated and dedicated he is," Alli added.

"And to see him out there running, I wasn't surprised because he works so hard every day. And, yeah, it is obviously a massive boost.

"Even when he is coming to watch the games, he is always speaking and trying to motivate everyone, which is good.

"He is a real leader, so to see him back out there and, as a player, obviously last season I had a few hamstring injuries, so it is a bit of a weird one because I don't want him to rush it, because I know how much it [the injury] can come back.

"But, at the same time, we need him as well. So, as long as he just takes the recovery properly and he comes back strong, then I will be happy."

Leipzig are in uncharted territory - having never previously played a knockout tie at this level - but Alli knows Spurs must be "clever" to beat the German side by balancing their attacking threat with a strong defensive display.

"Yeah I think they are a very good side," he said.

"It is going to be a very tough game and we know that, but we have to go into the game with a very positive attitude. I think, either way, we have got to score two goals anyway, and we know that.

"So we have to be on the front foot and, at the same time, not be stupid and throw it away.

"We have to be clever, pick our moments and play well. We know that, when they came to our place, they played very well, dominated the game for probably a lot of it - a lot more than we would have liked anyway.

"So we are coming here and, we have been in situations probably worse than this when we have had to turn it around, and we have done that.

"So we have to go in there with belief and, like I said, they are a very good side, a top side, and they have got a lot of top players.