Jose Mourinho rips into Spurs flops after Antwerp defeat: 'My future choices will be easy'

Dele Alli one of four players to be hooked at half-time in Europa League defeat at Antwerp; Dele has started just three games for Tottenham in all competitions this season and has been substituted at half-time in two of them 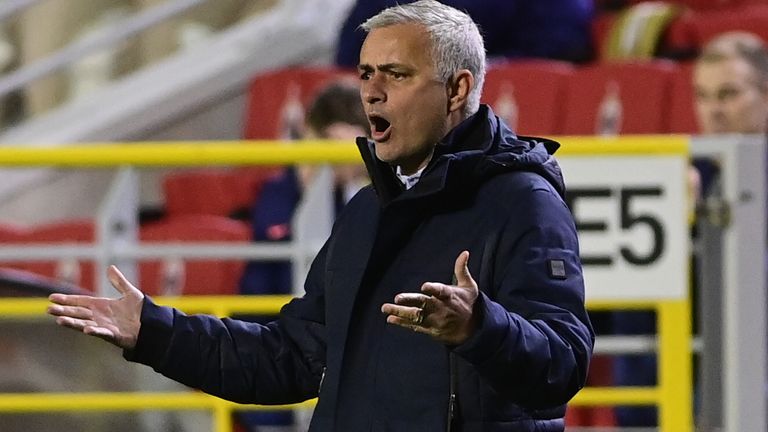 Jose Mourinho ripped into his Tottenham fringe players for not taking their chance in Antwerp, saying he now has "easy choices" when selecting his first team.

For Thursday's Europa League Group J game, Mourinho made nine changes from the win at Burnley, hoping to see some of his fringe players stake a claim.

However, a flat display triggered Mourinho to make four changes at half-time, with Dele Alli, Steven Bergwijn, Carlos Vinicius and Giovani Lo Celso all hooked in the 1-0 defeat.

Dele has started just three games for Spurs in all competitions this season and has been substituted at half-time in two of them.

When asked what he thought of Dele's performance, Mourinho refused to single him out but said the performance of the collective told its own story and that it should be obvious to onlookers what is his best team.

"I don't want to analyse individually," he said.

"It's fair to say that players with bad performances influence the team but also a team influence individual performances. It's not for me to individualise and bring some names to the table. You can do that yourself. You always tell me 'why is this player not playing, why is this player not playing' - maybe you don't ask me that for a few weeks as you have the answer.

"You know what our best team is. I always like to think the players deserve an opportunity. We have a big squad with lots of good players. It's my responsibility to give them opportunities but it's also their opportunity to catch the chance with both hands and ask for more. Tonight shows my future choices are going to be very easy."

Gareth Bale looked short of fitness, being replaced by Harry Kane on 58 minutes. Even the introduction of their talisman and Heung-Min Son could not spark Spurs into life.

Speaking about his half-time substitutions, Mourinho said: "I would like to make 11 [changes]! I didn't make five as I was afraid of a long 45 minutes.

"There is only one person to blame, that's me. I chose the players to start. At half-time, I tried to improve the situation but it was not enough. The dynamic of the first half was there, it was difficult to change.

"Antwerp also changed. In the first half, it was very easy to play with lots of space in between the lines to punish them which we didn't. Second half we improved but they played in a different way, they restricted spaces. It was very difficult. In the end, Antwerp got what they deserved. I am calm with it. The best team won and the worst team lost."