Tottenham's Harry Kane: How striker has evolved under Jose Mourinho

Harry Kane is the "most streetwise player in the Premier League," according to Jamie Carragher. "There's a little bit of the Zidane about him," says Gary Neville. The praise keeps coming for Tottenham's frontman. So what has changed?

The England striker was awarded man of the match during the 2-0 win over Manchester City, despite failing to get on the scoresheet - underlining the growing admiration of his work off the ball, defensive qualities and deeper positioning, and highlighted by the fact that he tops the charts for assists in the Premier League this season.

"There's a little bit of the Zidane in [Kane], when he gets the ball in that position," said Neville. "How he sort of shields it and protects it. He has been spectacular... [he] has got both centre-backs where he wants them." High praise, indeed.

So what is Kane doing differently?

On the face of it, Jose Mourinho has stuck with his favoured 4-2-3-1 system with Kane leading the line. But Kane's broader involvement all over the pitch has not hindered his returns at the top end.

Kane ranks among the top five per cent of centre forwards in Europe's top leagues this season for goals, headed goals, goals from range, shots on target, assists and creating clear-cut chances. Hallmarks of a world-class striker. 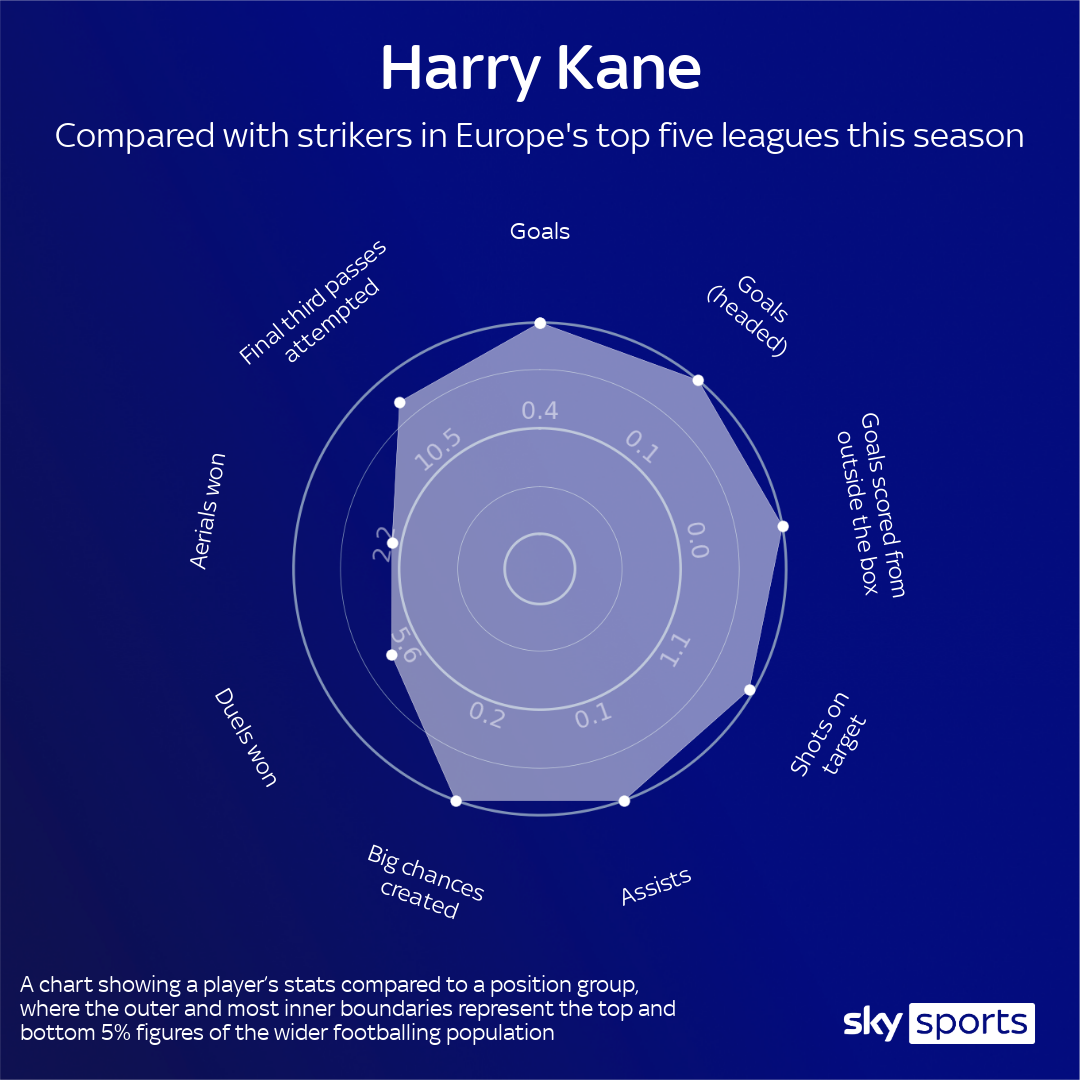 His shot ratio has increased since last term and he is firing from distance again - a trait that had been on the decline during recent campaigns.

More from Exclusives And Features

However, the graphic below also shows he is still utilising his sublime movement to eke out opportunities in and around the six-yard box.

But his broader qualities and deeper role are receiving additional acclaim. The touch map below almost resembles a box-to-box midfielder shunted forward 15 yards.

His defensive contributions epitomise that observation, typically covering a broader spread of the pitch this season - having already made almost as many interventions in his own box as he had in each of his previous two seasons.

When asked about the purpose of his role following the Manchester City win, Kane replied: "Mainly just to hold up the ball. Especially when you're under the cosh a bit. Just winning fouls, trying to bring others into play.

"On the counter attack, if I'm the line dropping deep, then I know I've got runners in behind. Thankfully we took advantage of that."

A good way to see how that translates on the pitch is to look at Spurs' average positions this season. Kane was the most advanced player during the previous two campaigns - but the wingers often patrol areas in front of him this term.

That slight tweak has transformed his passing game, too. The graphic below shows the directions and success ratios of his passes by season - revealing his distribution is almost exclusively directed upfield during this campaign.

He is also utilising his range of passing with three of his nine assists launched from distance, while his ability to instantly spot opportunities on goal was epitomised with his quickly-taken free-kick to tee up Son against Manchester United.

Speaking after the City win, Mourinho suggested Kane could initiate a seismic shift in how a striker's success is defined and analysed. "Maybe he will be responsible for everyone that loves football to change the way people look at a striker.

And the team ethic rings true from his captain. "Part of my job is to work hard for the team, win tackles," says Kane. "Obviously score goals and get assists, but I enjoy defending, I enjoy working hard."

The England captain is doing it all...

Merson says: Is Kane the best in the world?

"I just struggle with words to describe him. He isn't far off the best player in the world. And this is the reason: you've got players like Ian Wright, Alan Shearer, Sergio Aguero, Robbie Fowler, Andy Cole, Les Ferdinand, Jamie Vardy. All top, top drawer centre-forwards.

"Harry Kane is one of them, and then Harry Kane goes and plays where Kevin De Bruyne plays, where Eric Cantona played, where Dennis Bergkamp played, and he does it just as well.

"Name me one player in the world who can be a No 9, score goals, hold the ball up, be strong, and then go and play No 10, and put 60-yard balls through the eye of a needle, or run at the ball with pace with defenders all around you before picking out a ball to assist.

"Lionel Messi can't go up front, hold the ball up, bring people into play, and then score bundles of goals, and then go and play No 10 in the same game. He's a No 10.

"Kane can do both. I played with Dennis Bergkamp, one of the best in the world at what he did; he couldn't go up front and do what Kane does, hold the ball up and score bundles of goals.

"I played with Teddy Sheringham, he couldn't do both. Alan Shearer, Ian Wright, unbelievable centre-forwards - but you couldn't say to them: "For the next three weeks I want you to play No 10 and thread the ball through the eye of a needle."

"I can't believe what I see with Kane. Some of the passes, crosses, they are Kevin De Bruyne! Harry Kane has started to do what Kevin De Bruyne does!"