Gareth Bale's agent Jonathan Barnett believes the forward is not playing regularly at Tottenham because he is coming towards the end of his career.

The 31-year-old has started only two of Spurs' 22 Premier League matches since his return to north London on loan from Real Madrid, and Barnett directed the question of his playing time towards manager Jose Mourinho.

Mourinho said last week that Bale was not physically ready to play despite a social media post from the Wales star suggesting otherwise before he was left out of the FA Cup defeat at Everton. 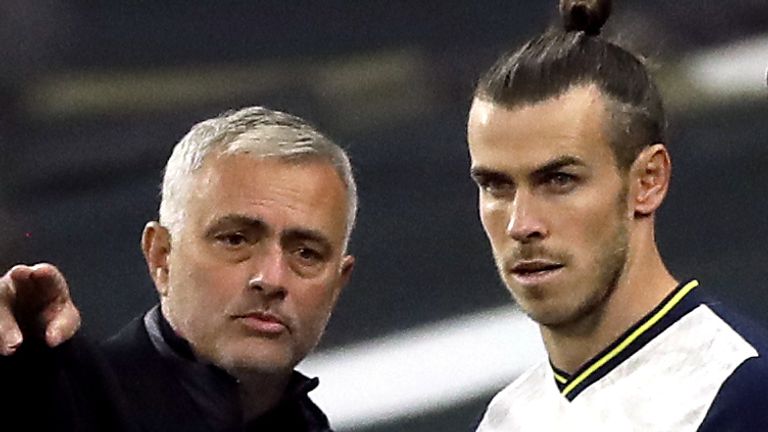 Tottenham should not just expect Gareth Bale to play 'cameo' opportunities from off the bench, while Dele Alli deserves to be given a chance to flourish, says Paul Robinson.

And asked why Bale was not playing regularly at the Financial Times' Business of Football event, Barnett said: "He's towards the end of his career. Really, you have to ask Mourinho that."

"When they say 'what's happened to him?' He's won more trophies abroad than any British player in history," Barnett said.

"He's done very well financially, and he has enough money for the rest of his life. He has a very good lifestyle, so that is what has happened to him."

Bale came through the ranks at Southampton and joined Spurs as a 17-year-old in 2007 before sealing a big-money move to the Bernabeu six years later.

Addressing his initial transfer to Spurs, Barnett, who has overseen the Welshman's career, said: "With Gareth we always knew where he wanted to be.

"We knew he had the talent so when clubs came in, the first thing we did was look at the clubs that were there and the ones to progress his career.

"We chose Tottenham for clear reasons; the path to the first team and good coaching.

"We turned down two offers for more money at the time but we spoke with him, his parents and they listened to us and he ended up at Real Madrid."

Should Kane leave Spurs as he approaches peak?

As Harry Kane enters his peak footballing years, the Pitch to Post Review show panel ask: should he leave Tottenham?

Kane, who turns 28 in the summer, is yet to win a major trophy at Spurs, though Jose Mourinho's side do face Manchester City in April's Carabao Cup final as they look to end a 13-year wait for silverware.

But Kane's future is under the spotlight again after failing to register a single touch in the opponent's box in the 3-0 defeat by Manchester City on Saturday.

Sky Sports' Jamie Redknapp said after the game: "That is not what players of the class of Harry Kane and Son want to be associated with. Harry Kane must be thinking: 'If I played in that City side, how many goals would I get? How many chances? How many touches in the box?'.

"Harry Kane must look at that and think: 'I want touches, I want to be the main man, not just taking free-kicks!'. He won't be happy doing that."