In an exclusive Sky Sports interview, Antonio Conte discusses bringing success to Tottenham with Harry Kane; "I wouldn't be here if there wasn't ambition from me or from my players"; watch Tottenham vs Leeds on Super Sunday live from 4pm on Sky Sports Premier League; kick-off 4.30pm

It has been roughly three weeks since Antonio Conte accepted the challenge of becoming the new Tottenham head coach.

It will be precisely 19 days since his appointment by the time he takes to the dugout for his first home Premier League game against Leeds United, live on Sky Sports, this Sunday. But already his whole demeanour is one of contentment, happiness and excitement.

Conte has wasted little time adapting to his new surroundings - what he describes as the best stadium and training ground in the world. He may be long in the tooth in many ways but in this honeymoon period at Spurs, the affable Italian comes across like a youngster in his unbridled enthusiasm for the task at hand.

For a man who has won five league titles in his last seven seasons in club management while boasting the second-best win ratio in Premier League history, very little has taken him by surprise on his return to England.

For somebody who is well known for his strict regime and his disciplinarian approach to all aspects of football, the 52-year-old's eyes sparkled throughout our meeting, providing an immediate reminder of how warm and friendly he is in person.

It is something this reporter knows only too well having been at The Hawthorns in May 2017 when Conte secured Chelsea a fifth Premier League title with victory over Tony Pulis' West Brom. His personable characteristics were highlighted once more this week in a social media exchange with his former captain John Terry.

There is always space for good humour and yet when you spend time in his company, you see what a serious, focused man he is, how he listens to every question carefully and responds in detail, and our latest encounter is no different.

"I'm happy to be back," Conte begins in an exclusive Sky Sports interview ahead of Super Sunday. "This is a great club and I'm really enjoying it. We have an amazing infrastructure in terms of the stadium and the training centre, so I feel this is the right place for me to work in the way that I like."

As he has stressed in his in-house interviews and press conferences, here again Conte reiterates the "need for a bit of time". He is far too humble to say at this stage that he is going to win the Premier League with Tottenham.

The former Inter Milan and Chelsea boss delayed reporters by an hour prior to the pre-match media call against Everton, and Conte acknowledges that patience too will be required, however much his tendencies have been to accumulate points in a hurry.

Among Tottenham's biggest issues this season are distance covered, plus lack of shots and chances created in open play and high passes per shot - all areas in which Conte's Chelsea ranked well in 2016/17 and 2017/18.

Conte believes the team is still short of one that is befitting of the infrastructure the club now has, but he can reflect with satisfaction on the work carried out in his short time so far. If he can instil his habits and his coaching on the current group, he will be able to bridge the gap to the established title contenders.

"I am not a magician," Conte continues as he lifts his right hand as though he were waving a wand. "I don't have the capacity to completely change the situation immediately, but honestly I'm happy because I know Tottenham is the right fit for me.

"We want to build something strong and something important for the present and for the future. We have everything around us in place and we have to now reach this top level with the team." 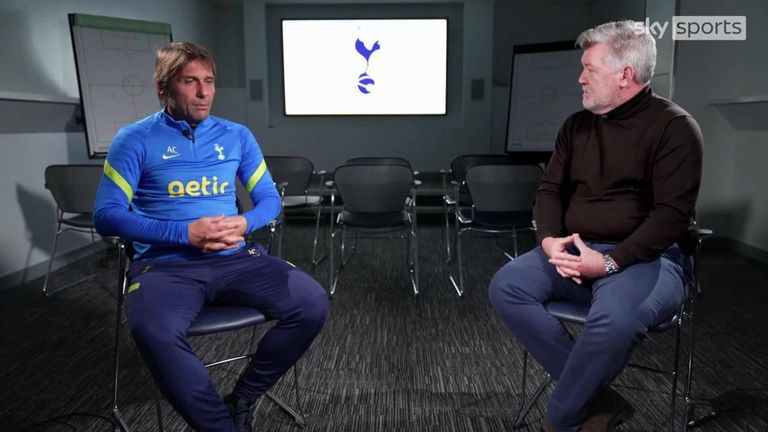 Antonio Conte explained to Geoff Shreeves that he is excited about the challenge he faces at Spurs and it may be the most difficult he has faced as a manager. Watch the full interview on Super Sunday as Spurs host Leeds with kick off at 4:30pm.

Conte has taken over at clubs previously who weren't in their best situation, thinking of his times at Juventus, Chelsea and Inter but they had all won the title in recent times. That cannot be said of Tottenham, who were last champions of England in 1961. So how different a challenge is this?

"You're right," Conte responds. "At Juventus, Chelsea and Inter Milan we were underdogs. I remember at the start Juventus were out of Europe while Chelsea were 10th the season before me. At Inter it was the same as they hadn't won the league in 10 years, but I'm not here just to enjoy but to build something important.

"I have to be honest with the fans and say that at this moment and for many reasons, there is a gap with at least four teams. We have to work hard to try to close this gap in a short time. If you get the time, you can't waste it.

"The target for myself and for the club is to be competitive and to try to fight with teams that right now I feel are higher than us. Arriving during the middle of the season is not easy for me and for everyone but this is another big challenge. Maybe this is a bit more of a challenge than I've had before in terms of its difficulty but I enjoy this type of situation."

You never get the feeling with Conte that he toes the party line.

Daniel Levy insisted that the club would try and embrace the philosophy of free-flowing football as he entered his quest for a new manager over the summer but in arriving at Nuno Espirito Santo following a lengthy search, all the early-season data indicated a more pragmatic approach which contradicted the club's so-called DNA.

Conte revealed that he needed time to reset following his two years at Inter, but it now feels that Spurs have belatedly arrived at the right appointment and the team should in time enjoy the rewards of a more joined-up approach.

"We've still got a team that's very young despite having players who have been here for many years," he says. "Now is the time to grow together and to have a target as I see no reason why Tottenham can't win if we work hard and are strong mentally. You have to make sacrifices, show passion, heart and have a sense of belonging.

"I'm not interested in speaking about the club's past - I prefer to focus on Tottenham starting a new path to try to have a new era in which they are competitive with the rest of the Premier League for important titles." 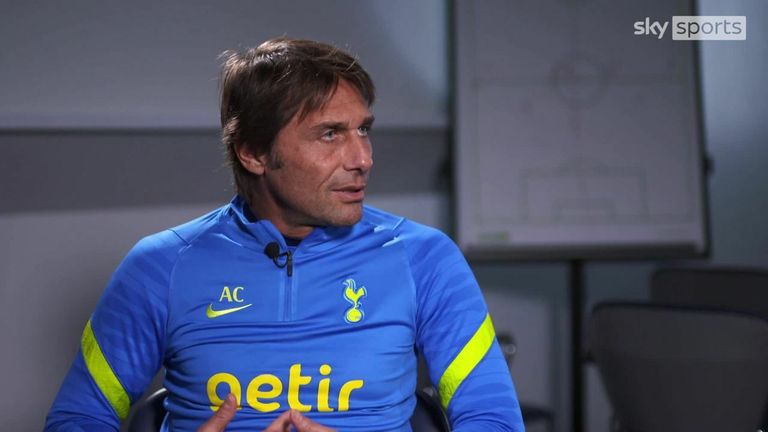 Antonio Conte says that Harry Kane’s ambition to win trophies is matched by himself and the Italian has that target in his sights. Watch the full interview on Super Sunday as Spurs host Leeds with kick off at 4:30pm.

Harry Kane has made the slowest start to a season in his Premier League career with one goal in his first 10 appearances - his previous fewest was two goals in the opening 10 fixtures in 2014-15 when six of those appearances were as a substitute.

By every shooting metric below, Kane is so far having the poorest season of his club career, and Conte will be hoping he can revitalise the 28-year-old in the same way he has worked so successfully under his previous strikers.

The top league goalscorer for Conte's teams in his last six seasons as a club manager have included Mirko Vucinic (aged 29) and Carlos Tevez (30) at Juventus, Diego Costa (29) at Chelsea and Romelu Lukaku (28) at Inter.

Kane returns to Tottenham having scored seven goals in two World Cup qualifiers for England against Albania and San Marino, but Conte brushed off suggestions he would need to convince the striker that he is already at the right club in order to win trophies.

If you're not the coach, you can still know a player but only superficially. It's only when you're really close to them that you can truly know the levels of their talent.

"Honestly, it's not necessary," Conte responds when asked if he has spoken to Kane with regards to his future. "Harry knows me very well and my history is very clear. I'm not someone who is happy starting somewhere without having a top target and that's the people I like to work with.

"There is the will to build something important and Harry knows this. I wouldn't be here if there wasn't ambition from me or from my players. I've told them I'm here because I trust them. You can stay for many years in the same team but you only write the story at this club if you win.

"By winning trophies, you go into the story of the club. I understand that Harry is someone who wants to win trophies and he can helped us achieve this as we're talking about a world-class player.

"He's a player with great talent and in these eight days that we've worked together I can see that it is enough to tell him only once what it is I want in a moment.

"He understands quickly and he's shown me that he's a clever player. He weighs up every situation and knows exactly where the 'keeper is whenever he's inside the box - the first post, the second post or whether he can kick it through his legs.

"If you're not the coach, you can still know a player but only superficially. It's only when you're really close to them that you can truly know the levels of their talent.

"Now I'm working with Harry, I have the pleasure and opportunity of knowing him I can tell you that we're talking about a really top player. He wants to win and so do we. After two or three weeks, I'm sure I haven't made a mistake in taking this decision."

The Tottenham fans have showered Conte with messages of support since his much-anticipated arrival, and with a serial winner now in the Hotspur hotseat, the man himself is relishing the chance to repay the faith.

Tottenham vs Leeds is live on Sky Sports Premier League from 4pm; kick-off 4.30pm. Sky Sports customers can watch in-game clips in the live match blog on the Sky Sports website and app.