Cristian Romero suffered a "serious" hamstring injury during the international break; Antonio Conte says he is unsure how long Tottenham will be without the defender; head coach not planning January transfers until he has "evaluated" all of his players Antonio Conte believes the hamstring injury suffered by Cristian Romero while on international duty earlier this month is "serious", although he is unsure how long Tottenham will be without the defender.

Romero sustained the injury while playing for Argentina against Brazil in a World Cup qualifier last week and had to be substituted early in the second half.

The 23-year-old was unavailable for Spurs' 2-1 win over Leeds on Sunday and Conte is concerned he could be without the defender for some time.

The head coach said: "We are waiting for another scan and honestly, I think his injury is a bit serious.

"We have to wait. I don't know the time he needs to recover - we have to wait for the next scan and then the doctor can give more details about his recovery."

Romero's injury leaves Conte short of centre-backs to feature in his favoured 3-4-3 formation, but the head coach insists he has not turned his thoughts towards strengthening his squad in the upcoming January transfer window. 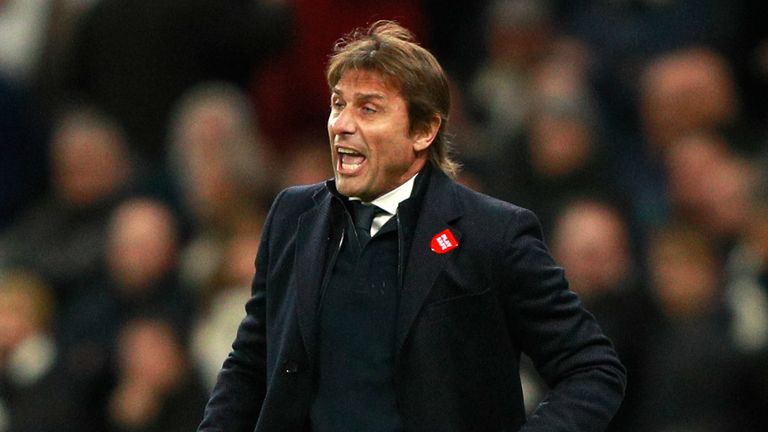 "In this moment I am not thinking about January because there is still a long way to go," he said. "We have many games to play.

"Also I want to make my evaluations about this squad. Now I am very focused on the present because the present is very important.

"I need to make many evaluations about the whole squad and then we will see what happens."

Although he will want to avoid any further injuries, Conte says he will not be following Nuno Espirito Santo's policy of leaving first-choice players at home when Tottenham take on NS Mura in the Europa Conference League on Thursday evening.

Nuno - who was sacked after just four months in charge and replaced by Conte this month - took a weakened squad to the Netherlands to play Vitesse Arnhem in the competition in October and saw his side fall to a 1-0 defeat.

FREE TO WATCH: Highlights from Tottenham's win over Leeds in the Premier League

But while he says he will have to rotate his squad, Conte will not be leaving any of his key players in London ahead of the trip to Slovenia, saying: "All the players available will come with us. They must be ready to play against Mura.

"I need to make rotations. There are players that are a bit tired because they played many games with the national team, and also we worked a lot in the last two weeks.

"There are other players that need game time. But for us this competition is important and we want to take seriously this fixture. We want to go through to the next step.

"For sure I will make the rotations because personally I need to know much better the players. There are players that I need to see them during a game."

One of those players is Ryan Sessegnon, who Conte says will start just his third game of the season against Mura after recovering from injury.

Conte believes the 21-year-old has "great potential", adding: "I have seen in the past he suffered a lot of injuries. Now we are trying to work in the right way with him.

"He will start the game. I can't wait to see his performance because he is a talented player - very young with great space for improvement.

"Now it's important to give him regularity and try to avoid injury to be available for every game."

In an exclusive interview with Sky Sports News, Tottenham's Emerson Royal reveals how Antonio Conte is trying to alter the mentality of the players and explains how he fits into the new head coach's plans.

"Conte arrived with a really competitive mentality," Emerson says. "That's not a criticism of the previous manager. He's teaching us all to give everything.

"From day one he was very clear with us. In his opinion, Tottenham Hotspur can win trophies and can beat anyone.

"There is nothing that can stop us from doing that and that is a mentality we have to get into our head."

Emerson has been a key feature at right wing-back since Conte arrived and implemented his 3-4-3 system.

Although he is still waiting on a first Premier League goal and assist, Emerson has been getting himself into good positions during his nine Premier League games. The next step is to improve his big chances created (0) and crossing accuracy (12 per cent) numbers.

"Everyone in the team has an important role in the system we are playing. I have to be aggressive when I'm attacking," he says.

"Going forward I always try to look for Harry Kane but when there is a goalscorer like him he can be marked by one or two defenders. It's not easy but I'm always looking for him."