Aston Villa have lost their last four league games; Reports suggest Villa boss Dean Smith could be replaced by Paulo Fonseca if they lose at Southampton; Smith: 'There is no panic'; Watch Southampton vs Aston Villa live on Sky Sports Premier League from 7pm on Friday; Kick-off 8pm 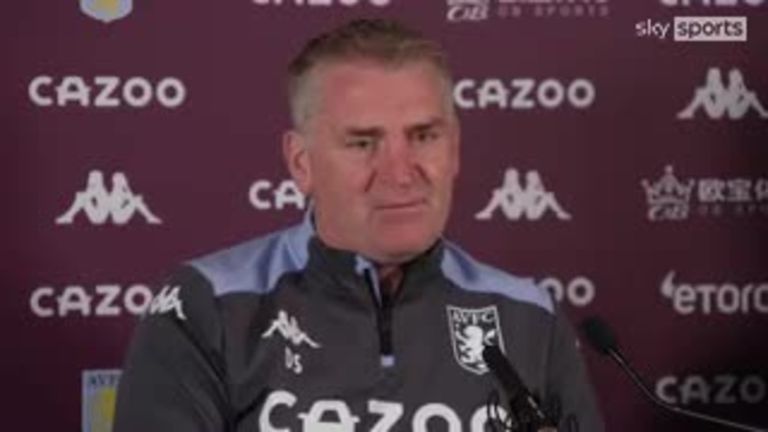 Aston Villa manager Dean Smith insists he is not feeling the pressure amid speculation about his job - insisting there is "no panic".

Reports emerged this week that the club could be considering former Shakhtar Donetsk and Roma boss Paulo Fonseca to replace Smith, should Villa suffer a fifth straight Premier League defeat against Southampton on Friday night, live on Sky Sports.

Smith is enduring his worst run as Villa boss for 20 months - which includes, arguably, the worst 45 minutes of his tenure in the defeat at Arsenal a fortnight ago.

Despite the 4-1 home loss to West Ham last weekend, Smith felt he got a response from his players following the dire first-half display at the Emirates Stadium and the 50-year-old was in a bullish mood ahead of the trip to St Mary's.

"I think the perception from outside of the football club is always different," said Smith.

"If you're asking me if I sleep well, yes, I sleep well. I still play well at golf. My wife is still talking to me so, if that answers your question, then yeah, I feel fine.

"There is no panic, we're in control and determined to put things right. There has been a reaction from all the players because they are disappointed with the results.

"We are not far from turning it around and we are in a determined mood, that's for sure. There is a collective responsibility and the players have been working hard.

FREE TO WATCH: Highlights from West Ham's win at Aston Villa in the Premier League

"We are in a high-performing elite sport and within those games there have been marginal moments which transpired. We've made some small mistakes in games that have cost us, we were missing five players for the West Ham game.

"I'm fortunate that I can take things with a lot more context than other people, because I see what happens on the training ground every day. I get the physical output data, I see the mental side of the players.

"I've been in this situation (before) and we stayed up in our first season in the Premier League.

"I'm happy to take the criticism for them. I'm a big boy, I've been in professional football since I was 16 years old so I've seen an awful lot of things.

"I just want the players to perform. I was actually quite pleased with what I saw at West Ham up until 80 minutes.

"In football you're going to have wins and losses, that happens. It's how you deal with them."

Smith will be without Danny Ings on Friday night. The striker missed the West Ham defeat with a muscle injury and will not feature against his former club.

Douglas Luiz also missed that game with a muscle problem and remains sidelined, while Ezri Konsa is suspended after his red card in the loss to the Hammers, but Jacob Ramsey looks to be fit despite being forced off with a twisted ankle on Sunday.

Morgan Sanson returns to contention after recovering from Covid-19, while Jaden Philogene-Bidace is also back in training after illness.