Unai Emery was in talks with Newcastle over replacing Steve Bruce at St James' Park; the ex-Arsenal manager said in a statement: "Villarreal is my home and I am 100 per cent committed to the club"; Former Roma boss Paulo Fonseca remains interested in the role 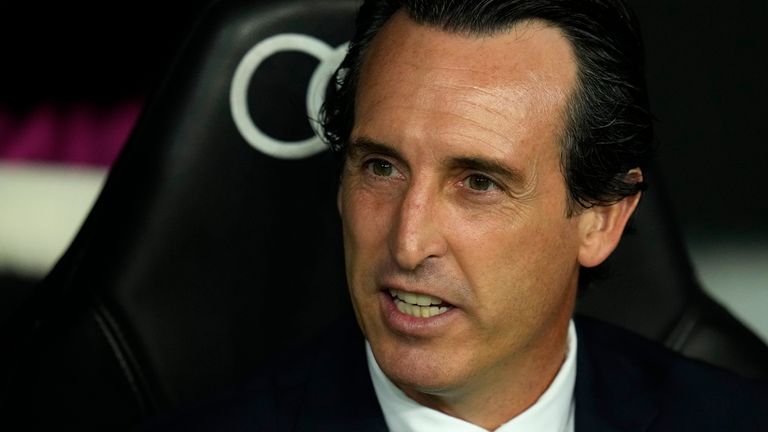 Unai Emery has released a statement to say he will not be leaving Villarreal to become Newcastle United manager, despite holding talks with the club.

The former Arsenal boss held talks with Newcastle's hierarchy earlier this week, but held reservations about joining the club, despite being their No 1 choice to replace Steve Bruce.

On Tuesday, Villarreal's president Fernando Roig rejected any suggestions that Emery was on the verge of leaving the Estadio de la Ceramica.

He said: "I'm sure that his mind is not drifting elsewhere. I know Unai has a contract with us and contracts are there to be fulfilled. We hope that we will be able to see that contract through until the end."

Emery was appointed Villarreal manager in July 2020 and his side beat Manchester United on penalties to win the Europa League last season, the fourth time he has lifted the trophy as a manager.

His team are struggling in La Liga this term, 13th in the table with two wins from their first 11 games, but are faring better in the Champions League where they are level on points with Manchester United at the top of Group F, following their 2-0 win against Young Boys on Tuesday.

Who now for Newcastle?

Former Borussia Dortmund boss Lucien Favre, ex-Bournemouth manager Eddie Howe, and Roberto Martinez are understood to be among the candidates under consideration by the Newcastle board.

Former Roma boss Paulo Fonseca remains interested in the role and would welcome further discussions with the Newcastle owners regarding the post.

Fonseca held talks with Newcastle two weeks ago about becoming Bruce's permanent successor, before the club moved on to other candidates, including Emery.

Bruce was sacked in mid-October, 13 days on from the £305m Saudi Arabia-backed takeover of the club, following a poor run of results that culminated in a 3-2 defeat at home to Tottenham.

Interim boss Graeme Jones is currently overseeing first-team affairs and took charge of the Magpies for their 3-0 defeat to league leaders Chelsea.

Newcastle would like to name a new head coach before Saturday's trip to Brighton in the Premier League. They remain winless in the top-flight so far this season and are second-bottom in the league table.

"It's the news Newcastle fans didn't want to hear this lunchtime, and the news they feared for most of this morning.

"There's nobody working within the new consortium that has been involved in a football club before, so this is all new to them. There are teething problems for them, and maybe they'll look back at this in months to come and think there were some mistakes at the start, but that is often the way with new owners coming in.

"The biggest surprise, for me, is that they haven't looked to bring in a chief executive, football director or sporting director yet. I think if you get someone like that in, who is used to dealing in these circles, it can be easier to bring a manager in.

"But you have to remember it's all new to the consortium, and it's something they'll have to get used to.

"It's also not a football club that is in a healthy position - they are sitting second bottom of the Premier League and there is a real threat of relegation.

"Do the consortium look again at someone like Unai Emery, someone who is held in very high regard and has won trophies, or someone who can come in on a temporary basis and get them out of the relegation zone in the Premier League?

"I think the consortium would like a big name here, but they are now going to have to change their attention to elsewhere. You have to say, the shortlist they had is ever shortening.

"There are two outstanding names - one of them is Eddie Howe, out of work and would be a fairly easy appointment, and would come in a heartbeat, and the other is Roberto Martinez of Belgium. They have the issue of trying to get him out of his contract, but not as expensive as Unai Emery.

"Newcastle caretaker boss Graeme Jones has worked with both Eddie Howe and Roberto Martinez - so both are a natural fit."