Manchester City host Liverpool at the Etihad Stadium on Thursday

Manchester City missed Fernandinho but will his return be enough to tilt things their way? Adam Bate takes a look at his role and the signs that City have not been at their best...

Manchester City's win over Southampton marked a welcome return to form for the reigning champions after losing three of the previous four games. But the goal that City conceded means that one worrying trend continues. Pep Guardiola's side are now on a run of seven Premier League matches in which they have failed to keep a clean sheet.

It is the first time in Guardiola's top-flight managerial career that he has endured such a sequence. For a coach who so values control, that will be a concern. The hope comes from the fact that Fernandinho, the midfielder who missed the team's back-to-back defeats, is back. He will surely be essential if City have any hope of keeping out Liverpool on Thursday. 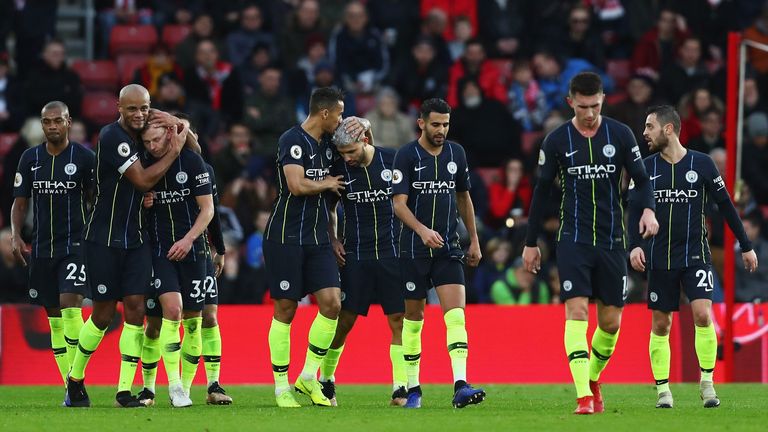 If he doesn't play, they haven't got anybody to replace him. He keeps it simple and knows how to break the game up. And when he gets the ball he gives it to the players who do the business. I think he's been a massive miss.

City's own website referred to the Brazilian as the 'invisible glue that binds City's many strands together' earlier this season. That has proved prophetic as something seemed to fall apart in his absence. Fernandinho is the man who anticipates the problem before it arises. He snuffs out danger and provides City's stars with a platform on which to play.

After seeing Fernandinho score one and set up another against Burnley in October, Guardiola was lavish in his praise. "He is so important for us," he said. "No doubt about that. Today he was clever, his body shape, every time he received the ball he was ready for it. He was incredible. Extraordinary. Today was one of the best performances this season."

Nobody doubts Fernandinho's importance now but what is really interesting is that the clues to City's downturn in form were there in the player's stats even before his absence and even before it showed in the results. The man tasked with shutting down and protecting has been working much harder of late. The evidence is in the number of defensive actions.

In the first seven games of the season, Fernandinho did not even make a tackle in four of them. He has made at least one in each of the 11 matches since, with six of them coming at Chelsea - the only defeat he has been a part of this season. He has gone from averaging a tackle every other game in that first part of the season to averaging three a game since.

The number of fouls he is conceding has also doubled in this second phase of games and his own assessment of his role helps to highlight the point. "The important thing to understand, from my point of view, is if the opponents break our lines and they are attacking our box, something has gone wrong and it is me who has to fix it," Fernandinho said in November.

The fact that City's fixer is now so much busier hints at a problem. Like an early-warning system, the chances are that Guardiola's on-field controller would be the first to sense it.

There has been misfortune, of course. Andros Townsend produced a wonder strike. Ricardo Pereira's late winner was almost as good. But the underlying numbers show they are giving up more chances while not creating as much as before. The Leicester defeat was the first time this season that City's expected goals numbers were not superior to their opponent.

Have teams found a way to hurt them that they were missing before? Liverpool certainly have the weapons to damage City more than just about anyone else. According to Guardiola himself, they are just about the best team in Europe right now. So he will need to come up with a strategy at the Etihad Stadium that masks those weaknesses once again.

"I have to reflect and think about what the team needs and how to help them," he explained after the result at the King Power Stadium. "What we have to do is try to change the dynamic." As shown by the more controlled performance at Southampton, Fernandinho's presence will help. Guardiola has his favourite masking agent back.

"Everyone knows their role and what they have to do on the pitch," explained Fernandinho back in November when the system seemed to be working so well. "So, for example, if you are playing against a team with very fast, attacking wingers, we cannot go forward without someone - me - covering those players if the full-backs have joined the attack."

Liverpool have that pace out wide and they have beaten City with it even when Guardiola's team were coming into the contest with more confidence than this. So will Fernandinho be enough to stop them this time or could he just have too much to do? That is likely to be the key battle. A potential decisive one in the game - and the Premier League season.