Manchester City found a different way to win against Chelsea

Manchester City went into their meeting with Chelsea 12 points behind leaders Liverpool, but they bounced back from the 3-1 loss at Anfield before the international break with a 2-1 win which served as a reminder of how they became champions in the first place.

After falling behind to N'Golo Kante's smartly-taken opener at the Etihad Stadium, Kevin De Bruyne struck a deflected equaliser before Riyad Mahrez hit what turned out to be the decisive goal. The win keeps them within nine points of Jurgen Klopp's side. It also shows they are capable of finding different ways to win.

For the opening half hour, it seemed Manchester City were on course for another damaging setback. Chelsea, having survived an early scare when De Bruyne flashed a shot wide, were the far better side, going close on several occasions before Kante's superbly-taken goal.

It is a testament to City's mental fortitude, however, that they were able to fight back and take control of the game. There was a large slice of good fortune about the deflection which took De Bruyne's shot away from Kepa Arrizabalaga for the equaliser, but Mahrez struck the second eight minutes later and City kept Chelsea at arm's length from then on.

Having been carved open repeatedly in the early stages, with Rodri struggling to get a grip on the game at the base of midfield, City rallied impressively. Chelsea duly went from having six shots on goal in the opening 21 minutes to having only five in the remaining 69.

"Chelsea didn't park the bus, they had a go, but they were punished and that's what the really good teams do to you," said Roy Keane on Sky Sports. "City responded like champions today. They weren't quite at their best, but they punished Chelsea's mistakes and they deserved to win."

No possession, no matter 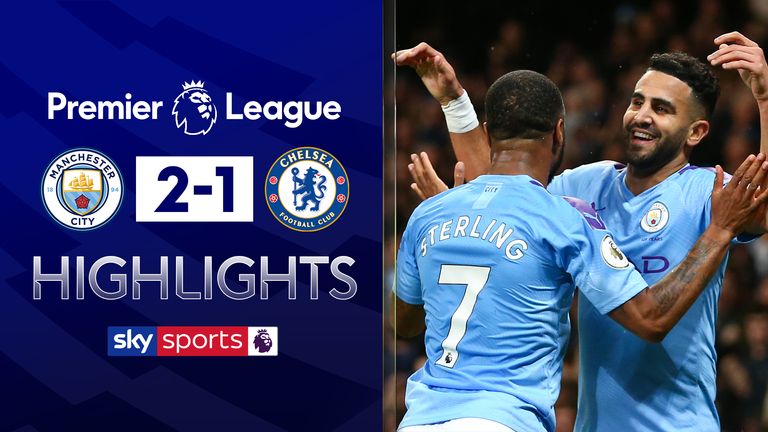 FREE TO WATCH: Highlights from Manchester City's 2-1 win against Chelsea

What was perhaps most impressive, though, was that City managed it despite having just 46.7 per cent of the possession. It was, according to Opta, the lowest possession share by a Guardiola side in any of his 381 top-flight matches as a manager. Despite those extremely unusual circumstances, City adapted to the challenge without any problem.

"People expect us to have 70 per cent possession, but these guys have a lot of quality," De Bruyne told Sky Sports afterwards. "Props to them, they can keep the ball with the quality they have. But it shows the other side of our quality. We can control the game without having most of the ball."

Their resolute defensive display was exactly what they needed after all the questions that have been asked of them recently. Aymeric Laporte was a spectator again at the Etihad Stadium - it will be several months yet before he is ready to return - but Fernandinho was excellent in his place and John Stones impressed alongside him.

Kyle Walker and Angelino struggled badly at full-back in the Liverpool game, but they were replaced by Benjamin Mendy and Joao Cancelo, who kept Willian and Christian Pulisic relatively quiet throughout. In midfield, meanwhile, Rodri improved before injury forced him off in the second half, with Ilkay Gundogan then helping to shore things up in his place.

When they did have the ball, City sprang forward to dangerously, transitioning at speed and finding gaps in Chelsea's defence. It was only thanks to Kepa's superb reflex save from Mahrez midway through the second half that Chelsea hung on as long as they did.

On his first Premier League appearance of any kind since the 2-0 loss to Wolves at the start of October, Mahrez provided a reminder of his considerable quality. The Algerian seems to drift in and out of favour with Guardiola, but on this evidence he will be tough to leave out in the weeks ahead.

His goal - a curling finish that gave Kepa no chance after a mazy dribble between Mateo Kovacic and Emerson - was outstanding, and it was just one of many standout moments. By the end, he had taken more shots than any other player on the pitch and completed twice as many dribbles as any of his team-mates.

Mahrez was so good, in fact, that the beleaguered Emerson had to be hauled off before the hour-mark, with the more experienced and defensively-minded Cesar Azpilicueta switching from right-back to left-back in an attempt to stop him. Mahrez was quieter in the closing stages, but his work was already done.