Khaldoon Al Mubarak exclusive: What next for Man City? 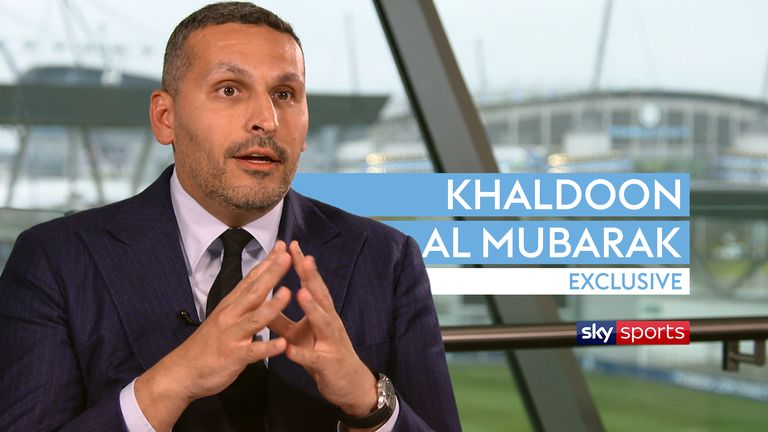 Chairman Khaldoon Al Mubarak talks about the sustainability of Manchester City, the commitment of Pep Guardiola and qualities of Raheem Sterling

He walked in right on time, his entourage only one person bigger than mine.

"Hi, I'm Khaldoon," said the warm and friendly voice to my two cameramen, offering his outstretched hand as he arrived for our long-awaited meeting in his vast boardroom.

This offers a good deal of insight into the man who has approved the release of a 10 per cent shareholding in the City Football Group he's chaired since 2008 to value it at just short of $5billion. Charming, polite, instantly putting people at ease. Yet an unmistakable presence.

He seemed noticeably more relaxed than when we last met. That night Manchester City had been eliminated from the Champions League by Tottenham with a helping hand from VAR.

On this bracing November afternoon in Manchester seven months later, the sale of the 10 per cent stake has just added $500m to the balance sheet and linked up with Silver Lake, business leaders in global technology investing, in the process.

Khaldoon Al Mubarak has waited 11 years to give his first UK broadcast interview. Plenty of time to choose your opportunity carefully, but also time in which to grow a company from one team in Manchester to a group of clubs around the world, all of which are self-sustaining and profitable.

"We are very excited," he told Sky Sports. "It's been a wonderful journey over the last 10 or 11 years and I think this transaction is a testament to the journey that we've undertaken.

"When Sheikh Mansour bought the club back in 2008, he did so with a view that this is going to be a profitable, sustainable business and I think we have done that. Over the last 10 years we have shown that this thesis is accurate and it is right and this transaction is a further testament to this thesis."

So why Silver Lake and why now? And just who are these new partners who count Silicon Valley, New York, London and Hong Kong among their bases?

"Silver Lake, I think, is a world-class investor, one of the global leaders in technology media, sports and entertainment investing. We're delighted to have them as part of the team here.

"It's a US firm and we have quickly, through the conversations we have had over the last couple of months, come to the conclusion that we're a good fit for each other.

"I think they add a lot of value to the group, particularly as I look at the future and what we intend to do in the next 10 years. I think it is a very nice marriage."

It is a marriage that adds half a billion dollars to the coffers and will have Manchester City supporters excited about what lies ahead. So what are the plans for the next decade?

"Well, we've been focusing over the last 10 years with a clear business plan, a clear investment strategy, a clear global strategy. We are leaders today in the football business globally.

"All these businesses are sustainable, are profitable. Manchester City is now five years in profitability. This sustainable model we've been working on has proven to be a success and Silver Lake sees that.

"We're not taking any money out. This investment money stays in the group and stays as part of our growth strategy for the future and we will continue down the route that we've started.

"I think this transaction is a testament to the appetite that this group has about the future. When we bring in another half a billion dollars of investment into the group and when we commit to keep that investment and not take out any of that, I think that in itself tells you how we see investing and how we see the future."

The importance of Guardiola

Pep Guardiola's presence has been integral to Manchester City's on-field success, guiding the team to consecutive Premier League titles, and at the top of the club there is no underestimating his influence.

"I think in Pep we have a leader who has shown time and time again his ability to continuously evolve and continuously challenge and we've been in this position not once but many times before and we've shown the character always consistently to come back," Mubarak says.

"This team is a special team. I think what's been accomplished, of the last two seasons to be specific, is special. 198 points over two seasons. Back-to-back Premier League titles. Four trophies last year.

"This team has shown time and time again that you cannot write them off. This is a committed team, a disciplined team, a hardworking team with an exceptional manager."

If there is hope for Manchester City's rivals, it stems from the suspicion that Guardiola could depart before too long. After four seasons with Barcelona and three with Bayern Munich, he is already into his fourth campaign with the club. Is he here for the long haul?

"You know Pep has been an incredible asset to this organisation. We can speak about his managerial accomplishments for hours. But I think as a person, as an individual, as a friend, he's been a core part of what we've accomplished here over the last three years.

"The people around him, the team we have in place today, the relationships I have with them, this is really an environment that's conducive to success for both him and everyone involved in this organisation. So I'm very satisfied with his commitment and our commitment to him and I'm looking forward to the continuity of this for years to come.

"Pep's achievements I think, no doubt, are integral. I think what we've accomplished over the last couple of years is remarkable. And that has had, I think, an overwhelming influence for the whole group. But I think Pep will be the first one to say this is a team effort."

On the pitch, few have contributed more than Raheem Sterling and the England forward's growth since his arrival from Liverpool in the summer of 2015 is a particular source of pride.

"I'm very proud of what Raheem has done over the last couple of years. His evolution as a player, but more importantly as a person, I think, has been exceptional," says Mubarak.

"I'm so happy for him because I think he's a wonderful young man and I think his talent, listen, there's one thing I'm sure of - Raheem is only going to improve and only going to grow as both a player and a leader so the future is incredibly bright for Raheem and it's a pleasure to have him as a part of our team."

The acquisition of Sterling and others has not been without controversy. This extraordinary growth continues against the backdrop of an ongoing UEFA investigation. It is alleged that Financial Fair Play regulations have been circumvented, an allegation which City have vehemently denied. The question is put to him straight.

"I think our position on this is very clear. And we've made it explicit over the last couple of months. And given that there is a process underway it's very important for me to respect that process. Therefore I think it's not appropriate for me to comment other than we're respecting the process and we're going through the steps."

So is he confident that the club will be cleared?

"My position has been consistent on this and on the record and clear."

What next for Manchester City?

Is the plan to overhaul Manchester United off the pitch as well as on it?

"I'm really just focused about what we do," Mubarak responds. "And what we're doing is building a sustainable business that continues to grow and continues to be successful both on and off the pitch. And I look at what we've achieved over the last 10 years as a benchmark to build on for the next 10 years across the board in every single club that we've invested in."

More clubs could be on the way.

"When we look at growth we look at three major markets: United States, China and India. And we've invested, obviously as you know, in New York, and that's our US presence in MLS. We've invested in China and certainly India is the next big market that we'd like to have a position in.

"You've seen what we've done over that last 10 years. You've seen how we've grown. I think we will continuously look at the right opportunities and grow in the right way, in a sustainable way and in a profitable way for the group."

This global domination hasn't happened by accident. There is a clear plan, a clear strategy, a clear goal. And clear parallels in Khaldoon's analysis of City's title chances this season with City Football Group's ambitious plans to be the market leader in world football.