Ole Gunnar Solskjaer is the bookmakers' favourite to be the next Premier League manager to lose his job; Manchester United exited Champions League at group stage with midweek loss to RB Leipzig; watch Man Utd vs Man City on Saturday, live on Sky Sports from 5pm 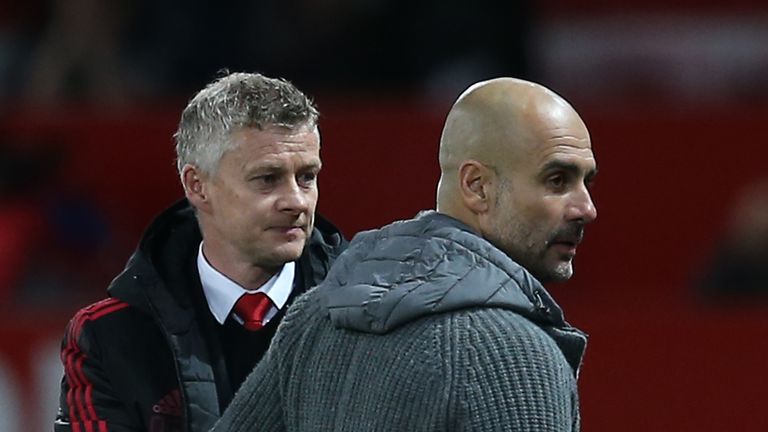 Pep Guardiola says Ole Gunnar Solskjaer does not need his support as pressure builds on the Manchester United boss ahead of Saturday's derby.

United go into the game at Old Trafford one place and one point above Manchester City in the Premier League, but were knocked out of the Champions League at the group stage after losing 3-2 to RB Leipzig in midweek.

Their exit saw Solskjaer installed as the bookmakers' favourite to be the next Premier League manager to lose his job, and a negative result in this weekend's Manchester derby will only increase the heat on the 47-year-old.

But Guardiola does not think Solskjaer requires his sympathy, saying ahead of the trip Old Trafford, live on Sky Sports: "That's why we get a lot of salary!

"Important is to know the value of Solskjaer is there - no doubt about this. I don't have to give him support because he is strong enough.

"He knows how it works, this job; when we win, we are a genius and when we lose, we have to be sacked. It happens in United and all the clubs around the world. This is the reality."

United's loss in Leipzig on Tuesday came after they fell 3-0 down to the German side, who qualified for the last 16 of the Champions League at their expense.

United also had to contend with last season's runners-up, Paris Saint-Germain, and when asked if too much was being made of them failing to get through a tough group, Guardiola said: "Absolutely.

"But what is not going to change is the margin to be in the next round or be out in the group stages.

"Against PSG, [Anthony] Martial has two clear chances, one without the 'keeper and another one with just a defender on the line, and he missed it.

"At Leipzig, with the cross from [Paul] Pogba with [Harry] Maguire at the second post to score a goal, the opponent intercepts and the keeper saves the ball because he found it behind his legs. It would be 3-3 and it would be about the spirit and character and personality of United.

"This is the Champions League - we have to accept it. The margins at this level are so high and that is why big teams can be out.

"That's why always when we win one game in the group stages, I say to the players 'well done, guys, it's so difficult and you make an incredible job'.

"In the Premier League, it's the same. Every game you are able to win is so complicated, so difficult."

How John Stones turned his Man City career around

John Stones could be a key figure at the heart of the Man City defence in the Manchester derby on Saturday. That seemed an unlikely prospect a month ago - but the centre-back has reclaimed the trust of Pep Guardiola.

Stones has played a major part in four of City's last five games - including his first Premier League starts since the opening weekend of the season - and they have kept a clean sheet in each of those fixtures since defeat to Tottenham on November 21.

"He has been injured and had personal issues but is now settled again… he'll have the chance to show his quality in this team," said Guardiola after Stones' return to the fold against Olympiakos four days after the Spurs game.

The manager has been true to his word, with Stones surprisingly displacing Aymeric Laporte alongside Ruben Dias. The 26-year-old England international then stepped off the bench during the first half against Marseille in the Champions League on Wednesday and looked assured for an hour alongside his French team-mate.

On the back of those performances, Stones now looks likely to start against Manchester United at Old Trafford - and on this week's Pitch to Post Preview Podcast, Sky Sports News reporter Ben Ransom explained how the defender, who appeared to be on his way out of Man City, turned it all around.