Kevin De Bruyne says it was "a straightforward decision" to sign contract extension with Manchester City until 2025 and he "could not be happier"; De Bruyne's existing deal was due to expire in 2023; director of football Txiki Begiristain says it is "a very significant moment" for City 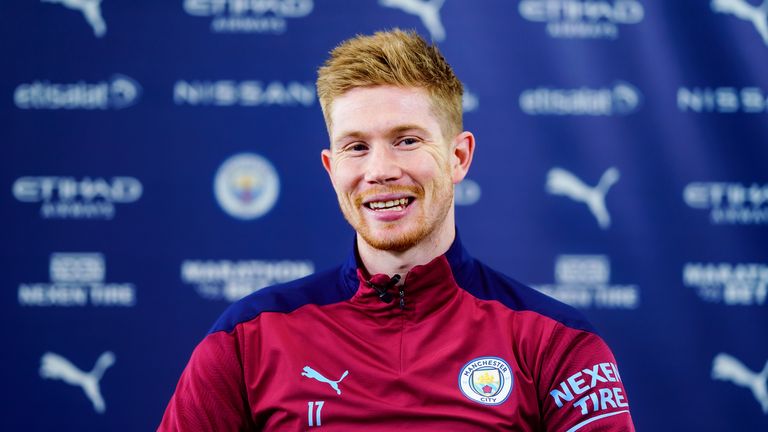 Kevin De Bruyne says he feels 'proud' to have been rewarded with a contract extension at Manchester City, which will keep him at the club until 2025. Pictures: CityTV

Manchester City midfielder Kevin De Bruyne has signed a two-year contract extension that will keep him at the club until 2025.

The Belgium international, whose existing deal was due to expire in 2023, is 30 in June and now looks set to see out most of the remainder of his career at the Etihad.

De Bruyne has had a glittering spell since joining the club from Wolfsburg in 2015, winning seven major trophies, which could become 11 by the end of the season if City are successful in their hunt for a quadruple.

However, ominously for the rest of Europe, he reckons the best is yet to come for himself and Pep Guardiola's team.

"I could not be happier. Since joining City in 2015, I have felt at home," he said. "I love the fans, my family are settled here in Manchester and my own game has developed really well.

"This football club is geared for success. It offers me everything I need to maximise my performance, so signing this contract was a straightforward decision. I am playing the best football of my career and I honestly feel there is more to come.

"Pep and I see football in the same way. Having that relationship with a manager is so important to me because our objectives are totally aligned, and we want the same things.

"My focus now is on ensuring we have a successful end to the current campaign. Our results and performances so far have been excellent, but we need to make sure we end the season with the silverware we deserve."

'Significant moment for this football club' 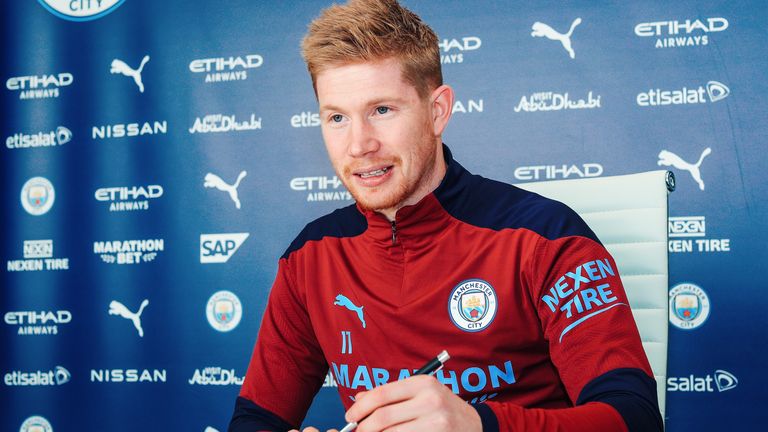 De Bruyne, who was named as the Professional Footballers' Association's player of the year in 2020, is having another impressive campaign, with seven goals and 16 assists, and director of football Txiki Begiristain knows City have one of the best footballers in the world on their hands.

"This is a very significant moment for this football club. Kevin is, without question, one of the best players in world football," Begiristain said.

"His performance level has been remarkably consistent since coming to City, and in the last few years he has developed into one of the game's elite players.

"His talent is unquestionable - but he is also a consummate professional whose dedication to Manchester City during his time here has been nothing short of remarkable. He constantly seeks to improve, and his approach is the perfect blueprint for any young player looking to carve out a career.

"We are delighted he is our player and I look forward to watching him during his peak years here at Manchester City." 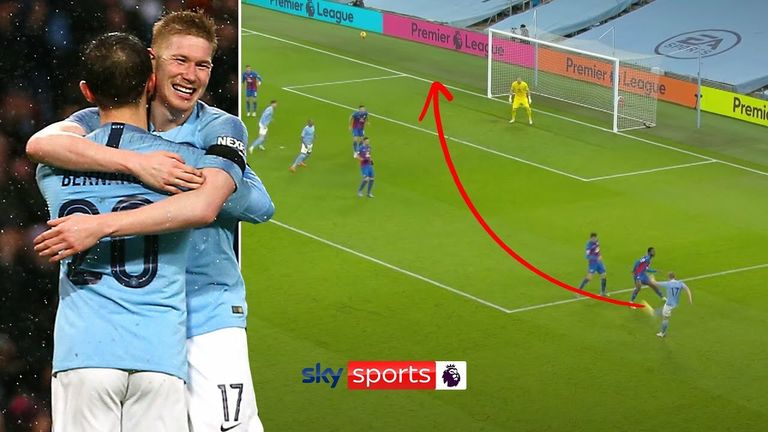 Take a look at some of De Bruyne's greatest assists

"He certainly seemed to be talking that way - he's very happy and settled in Manchester and in incredible form.

"It really just seems to be a case of how long he can keep that form going; he's been their players' player of the year three times out of the last five and this season he's been magnificent: eight goals and 16 assists for Man City.

"He creates goals, he scores goals and he's at the heart of everything Man City do. He's incredibly important to their chances of winning the Quadruple.

"On the back of the announcement about Sergio Aguero leaving this news will be very important for City fans. They'll be building a statue to him - they should probably build one for De Bruyne considering the amount of success he's had and the influence he's had.

"If you look at the spine of the squad, quite a few will be here for quite a long time, which also adds credence to the idea that Pep said in a recent press conference that City might not sign any players this summer despite all the speculation around Erling Haaland."

255: Appearances De Bruyne has made for City in all competitions since joining from Wolfsburg in 2015.

176: Premier League appearances made for the club to date.

76: Assists provided by him across those 176 matches - he has also scored 41 Premier League goals for City.

20: Number of Premier League assists he registered last term, the third season his tally had reached 15 or more. It saw him equal the record for highest number of assists in a Premier League campaign, matching Thierry Henry.

One: De Bruyne, who also scored 13 Premier League goals in 2019/20, last season became the first City player to be named the Professional Footballers' Association's men's player of the year.

11: Premier League assists to his name so far this term.

Three: Appearances De Bruyne had made in the Premier League prior to joining City, for Chelsea in 2013/14 - which included one assist. He played just nine times for the Blues in total.

When can Man City win league - and what about Quadruple?

De Bruyne is helping City storm towards the Premier League title but what else lies ahead in their bid to claim an unprecedented Quadruple?

Guardiola's side are closing in on reclaiming their league crown from Liverpool and could yet add a domestic cup double, as well as the Champions League trophy that has so far eluded them.

We detail the Premier League permutations as the 2020/21 campaign reaches crunch time, mark the key dates elsewhere and get the verdict of Treble-winner Gary Neville on City's chances of going one better...