Man City came from two goals down to draw 2-2 with West Ham at the London Stadium; Riyad Mahrez missed a late penalty but City move four points clear of Liverpool; Pep Guardiola: "The big privilege we have is that it's in our hands." 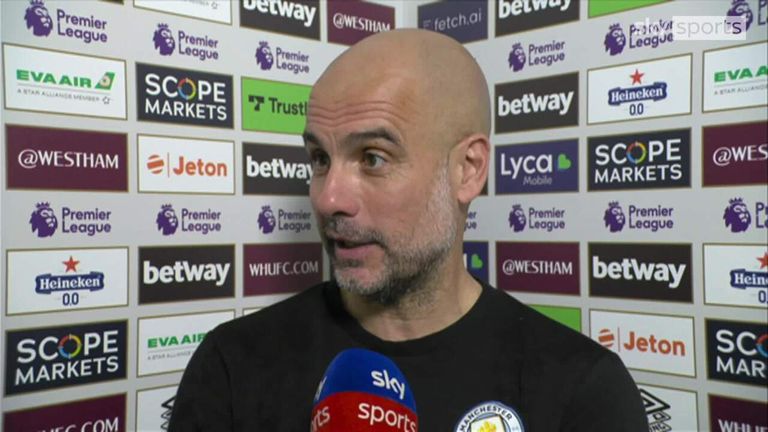 Pep Guardiola jokingly told Southampton to "beat Liverpool 4-0" when asked if he had a message for the Reds' opponents on Tuesday after Manchester City's 2-2 draw with West Ham.

Guardiola's side recovered from two goals down to claim a point at the London Stadium but missed the chance to win when Riyad Mahrez had a late penalty saved by Lukasz Fabianski.

The draw keeps their title in their hands, but a Liverpool victory over Southampton in their game in hand, live on Sky Sports on Tuesday, will ensure the gap stands at a solitary point on the final day, when City host Aston Villa and Liverpool are at home to Wolves.

City could, however, be crowned champions before that if Liverpool are defeated at St Mary's Stadium.

Asked if he had a message for Southampton in his post-match press conference, Guardiola replied: "I would say, beat Liverpool four-zero!"

He added: "The big, big privilege we have is that, at home, it's in our hands. We don't have to look at anything else other than ourselves. We just have to give everything.

"I said [to the players], 'Don't be sad today because we gave a really good performance. It's fair, against this opponent, to arrive at the last day to decide who gets the title because both teams are so good'.

"Against this Liverpool you cannot win the league four games ago. You have to fight until the end.

"Next week our stadium will be sold out, we will give them our lives and they will give theirs, all together. To do it is an incredible privilege, after many years.

"To have our chance with our people, to win one game to be champions. I'm looking forward to it."

Speaking to Sky Sports about his side's performance in east London, Guardiola added: "Great comeback. And a comeback against this team in this stadium with the way they defend and how strong they are was an incredible credit to the team.

"We played a really good game. We spoke at half-time and said if we score one goal, we'll be in the game, don't give up. Fortunately we scored early in the second half.

"One more week, one more game, with our people at home. I assure you something: it will be sold out in the Etihad Stadium and we'll do the best performance possible to win the game and win the title.

"It would have been perfect to win today but West Ham is fighting for Europa League and have made an incredible season. It's in our hands, that's good.

"It will not be easy, there will be a lot of emotions. We have to train calm and arrive fresh. We have one week. Some days to recover. And we will do everything in that game to win the title."

Guardiola also defended Mahrez over his missed penalty and insisted the Algerian will remain on spot-kick duties going forward.

"This season Riyad was extraordinary," he said. "We scored a lot of penalties. This season we were good on the penalties. He took responsibility, he missed it. Next game he's going to score." 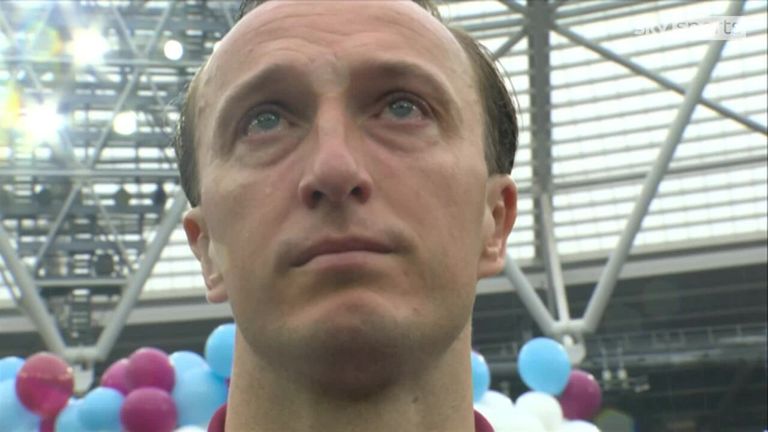 After playing his last match at the London Stadium, Mark Noble delivers an emotional speech to the West Ham fans.

Guardiola bowed down to West Ham captain Mark Noble when they met on the pitch after the game and then gave the 35-year-old a warm embrace, on a day when the home side paid tribute to their long-time midfielder who is retiring at the end of this season.

"I admire the trajectory of these type of football players," Guardiola said, when asked about what he had said to Noble. "All his career here, his home, West Ham. How many years, how many games... unfortunately it might be one of the last few cases we see in world football, a player stay a whole career [at one club].

"Hopefully he can stay in football because the knowledge he's got will be incredible for English football, for the Premier League, for West Ham... on behalf of Man City, congratulations for his incredible, long career."