West Ham are interested in signing Marouane Fellaini, as manager David Moyes looks to team up with the midfielder at a third different club.

Fellaini has two years left on his contract in China, however, the Chinese FA are introducing a salary cap which means the 32-year-old would have to take a 75 per cent pay cut if he stayed beyond the end of his current deal.

Moyes has previously coached Fellaini twice, taking him from Everton to Manchester United on Deadline Day 2013 for £27.5m.

Fellaini has made 260 Premier League appearances during spells at Everton and United, scoring 27 goals.

West Ham have also agreed a deal in principle to sign Benfica midfielder Gedson Fernandes on an 18-month loan without an option to buy.

Another possible option in midfield for the Hammers is 21-year-old Genk midfielder Sander Berge.

Berge played against Liverpool twice in the Champions League this season, and has also attracted interest from Inter Milan and Napoli.

One player no longer under consideration is Inter Milan striker Gabriel Barbosa. The Hammers made a bid before Christmas, but have now prioritised other areas of the pitch and the deal is off the table. 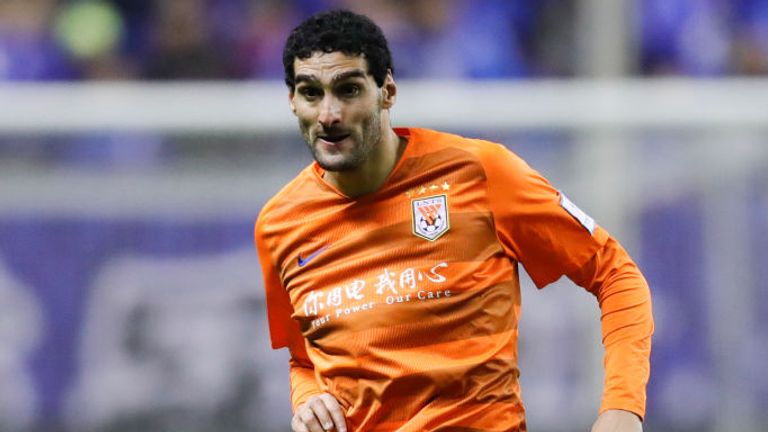 The Transfer Show panel discuss a possible move back to the Premier League for Marouane Fellaini, as West Ham register an interest in signing the 32-year-old

"Fellaini is a player who David Moyes knows very, very well. He had a pretty good season in China. I think he scored 12 times, his club finished fifth and they got to the final of the Chinese FA Cup.

"He has two years left on his contract and this could be crucial. The salary cap means that foreign players cannot earn more than £50,000 a week.

"Marouane Fellaini is earning more than £200,000 a week. The good news for him is he can carry on earning £200,000 a week until his contract runs out. But if he was to sign another contract, then he would take a whopping 75 per cent pay cut.

"So, Marouane Fellaini will leave China, I think, within the next two years, and my information this evening is that West Ham United want to sign him.

"Interestingly, David Moyes did say today that in this transfer market, he is looking for players who have Premier League experience. Players who know all about what it's like to play in the Premier League, and of course Marouane Fellaini would appear to fit the bill."