Tomas Soucek is top of the Premier League's running stats. He tells Sky Sports about his fitness, form and West Ham future ahead of their clash with Watford, live on Sky Sports Premier League from 7.30pm; kick-off 8pm

"It's an incredible stat," David Moyes said with a shake of his head in a press conference in February. "Tomas ran more the other night than any West Ham player has run for six years."

In his first away game with West Ham, on-loan Slavia Prague midfielder Tomas Soucek covered 13.1km in the battling 2-0 defeat to Manchester City.

While that huge effort ultimately counted for little at the Etihad, Soucek's remarkable running has continued - and the energetic Czech Republic international is now playing a key role as West Ham fight their way towards Premier League safety.

"I cover all the pitch when I can," he tells Sky Sports with a smile, ahead of West Ham's huge Friday night clash with fellow-strugglers Watford.

Soucek has covered more ground than any other Premier League regular since the restart, per 90 minutes - and that commitment has not gone unnoticed by the West Ham fans, who were singing his praises on social media after another powerful performance in the 4-0 win at Norwich on Saturday.

Most distance covered per 90 minutes since Premier League restart

His mentality was honed at his parent club, where Soucek and his team-mates were drilled for an intense pressing game. "In Slavia, we played many of us like this," he said.

"For example, in the Champions League we wanted to press all over the pitch - and I wanted to help my team here with intensity and running and covering the pitch too. When I am strong, I like to go to both boxes."

So where does this standout athleticism come from? "When I was in school I went very often to some running races," said Soucek. "We ran in the park or in the forest. But my mother sometimes ran marathons.

"I think in the future for fun [I'll do marathons] - but not now! I prefer this running, with a ball."

Quality as well as energy

Moyes spoke about how West Ham needed "a bit more energy" in that February press conference and Soucek has clearly delivered that since arriving in January. But he brings quality, too.

The 25-year-old, who captained Slavia Prague and was named Czech Footballer of the Year in 2019, has shown his defensive skills in the centre of the pitch, where he is joint-top among West Ham players for interceptions per 90 minutes this season.

But his dynamism has also allowed him to be a real threat in the attacking third too.

Soucek has an eye-catching scoring record for Slavia Prague, with 30 goals across all competitions in the last season and a half before his switch to West Ham, and he has found the net in important moments for the Hammers since the restart.

There was a headed goal on the stroke of half-time in the 3-2 derby win over Chelsea, after he had earlier seen a close-range shot controversially ruled out by VAR, and an instinctive poacher's finish in the 2-2 draw at Newcastle.

"I like to go to the boxes on both sides, on the defence and the offence, too," he says. "I used to play like this in Slavia and I want to play here too.

"We do some corners and free-kicks to me and to other guys because we are very strong with our height but when we play the match I go very quickly to the box and I want to support our striker from the second line. I have more space there, so it is good for the team and for me, too."

Soucek admits it is an odd feeling scoring important goals in empty stadiums - "I used to love playing at all the grounds when I came and now it is very strange" - but he is settling in at West Ham despite the restrictions.

His midfield colleagues Mark Noble and Declan Rice may be at opposite ends of their careers but in Soucek's view, the trio make an ideal combination in central midfield.

"For me it is very good [playing alongside them]," he says. "When we have more time together it is better and better. Mark Noble is a great player with many experiences. He is the leader of the changing room and when I came he was very helpful and useful to me for settling in.

"Declan is a young star and each day he is better and better. We three are together now and we can help West Ham stay up."

West Ham's perilous position is rarely far from Soucek's mind during the interview. Despite the resounding win over Norwich, results elsewhere mean they are still looking over their shoulder with three games to play.

A win over Watford at the London Stadium on Friday night, though, would be a huge step towards securing their Premier League status. "This is a massive game for us," says Soucek. "It's a six-pointer game and we have prepared well. I believe we are ready." 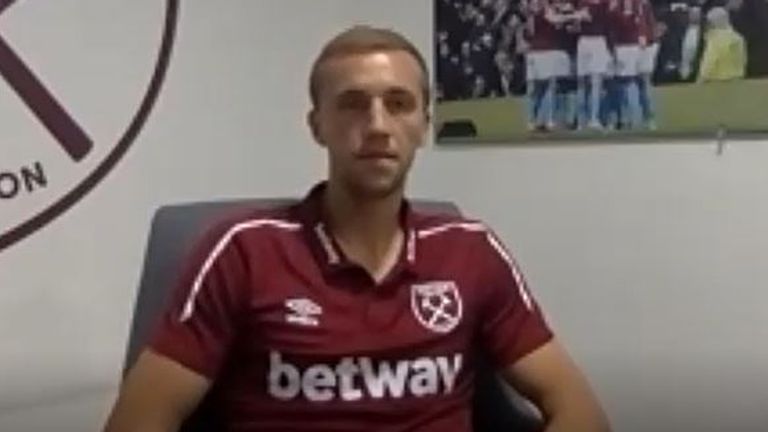 When we are safe we will help West Ham - and I will sign a contract with them too. It is two in one!

Premier League survival would also see Soucek turn his loan deal into a permanent transfer. "My ambition number one is that I want very quickly to get safety for the club," he says. "When we are safe we will help West Ham - and I will sign a contract with them too. It is two in one!"

Soucek seems determined to make sure his future is at West Ham and in the Premier League. And you can be sure he will be running hard to make that a reality.