Will Hughes: The former wonderkid who is now blossoming at Watford

Will Hughes has caught the eye in Watford’s impressive start to the season. With the help of the midfielder’s former coaches, Adam Bate finds out why this particular Premier League success story is one that has been many years in the making.

In an interview with the Sunday Times last weekend, Will Hughes caused something of a stir among the Derby supporters who had followed his progress since he was a teenager. It had long been assumed that he had moved to Watford in 2017 to play Premier League football. Hughes instead revealed that Gary Rowett had told him he was "not his type of player".

It is difficult to believe that his style could fail to impress anyone, but it is true that he is not in the usual mould of English midfielder. Hughes is all short passes and subtle movements. Watford boss Javi Gracia says he is "more of a typical Spanish player" - he even speaks the language - and, as well as England did in Russia, it still feels like it is a type that's missing.

Fortunately for Hughes, Gracia has embraced his gifts and senior international ambitions have been reignited. He has started each of Watford's last 10 games and has been a key part of the team's 100 per cent record this season. Flourishing in a tucked-in role on the right flank, he is finally showing everyone what he can do in the Premier League. 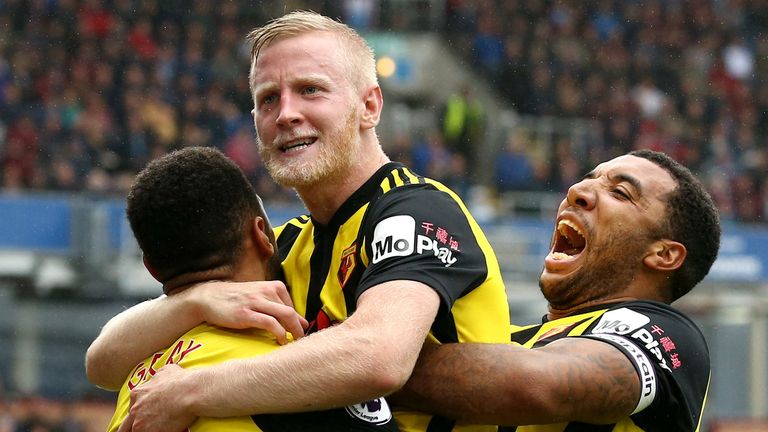 Watch highlights of Watford's 3-1 win over Burnley, including Hughes' goal

The word 'finally' may seem a strange thing to say about a 23-year-old player but Hughes is no fledgling talent. While only nine months older than his former England U21 team-mate Ruben Loftus-Cheek, he has played almost 150 more senior games. Three times he went close to reaching the top flight with Derby, having made his debut at the age of just 16.

Hughes played 38 first-team games before his 18th birthday and several more before taking his A-levels. He was fast-tracked from England's U17 side to the U21s - the second youngest ever to play for the country at that level. Progress was swift and, according to then Derby boss Nigel Clough, the interest from clubs such as Liverpool and Barcelona was "inevitable".

An intelligent young man, Hughes took it in his stride. He was also well managed by Clough, as former youth-team coach Kevin Nicholson recalls. "Nigel Clough was brilliant at that," Nicholson tells Sky Sports. "Will would be playing for the U16 team at the weekend and then all of a sudden Nigel asked him to go and train with the first team. It was a huge test.

"He had the ability. That was clear to everybody. It did not take too much to work that out at the time because he was extremely talented and had lots of potential. But as soon as he got that opportunity and proved he could cope with it, there was no looking back. That was it. From that moment, he began to grow into a first-team player."

The experience accelerated Hughes' development. He was so far ahead of schedule that he had played in the Championship before featuring for John Peacock's England's U17 side. "Will came in halfway through the season having had the first-team exposure at a very young age," Peacock tells Sky Sports. "That reaped dividends. You could see the talent."

The pathway since has not been straightforward. A cruciate ligament injury on the opening day of the 2015/16 season cost him eight months of his career, as well as some of the advantages that had been gained from taking his early opportunity. It challenged him mentally as well as physically. Hughes admits that he became paranoid about the injury.

But it has not changed his approach. He remains combative as well as classy, even drawing the ire of Sean Dyche for one robust challenge on Stephen Ward in the recent game against Burnley. Hughes himself claims he is "not the best tackler" but that has not stopped him making more of them than any other player in the Premier League so far this season.

He also scored in that game and covered the most ground of anyone in the win over Crystal Palace last time out. Even so, those are not his main qualities. "He is not a physical player," said Gracia. "He is a clever player and can see the spaces." Hughes has the best passing accuracy of any Watford player in the opposition half of the pitch.

It is vital for Watford given the make-up of their midfield. Etienne Capoue and Abdoulaye Doucoure bring considerable presence in the middle of the park, while Roberto Pereyra is a huge threat when running with the ball at his feet. It is Hughes who brings balance. "He is a different player," added Gracia. "When he plays he makes the team play as well."

There is some evidence to support that view. Since making his Premier League debut for Watford, the club has won 43 per cent of the matches that he has started but only 22 per cent without him. It will be difficult to improve that record when Watford host Tottenham at Vicarage Road, but the visitors will not have the monopoly on young English talent.

Hughes will be up against several of his former England U21 team-mates on Sunday, Harry Kane among them. He might be playing catch-up right now but for the many admirers who have followed his progress, it is just exciting to see him thriving once more.

"He has had a few injury problems along the way but he has come back from that," says Peacock. "The pathway is no clear climb. It is how you deal with adversity and that is where the mental characteristics come into it. It is smashing to see that he is progressing quite nicely at Watford. I am delighted that he has kicked on."