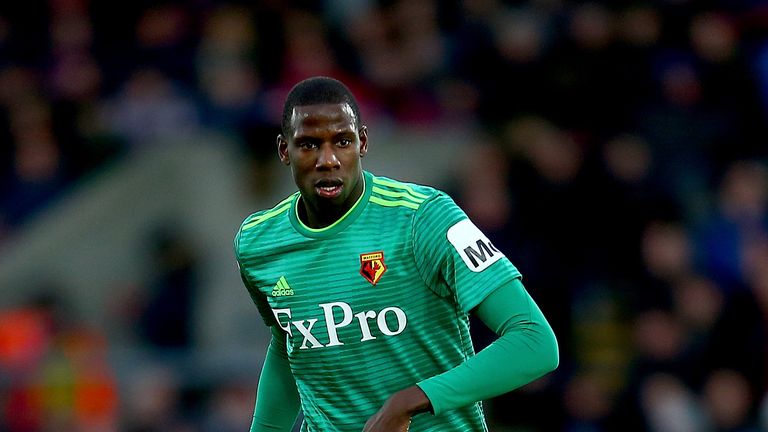 Abdoulaye Doucoure admits he has ambitions to play in the Champions League one day, but insists he is happy at Watford

Abdoulaye Doucoure may be enjoying a fine season at Watford, but the French midfielder is not shy about discussing ambitions beyond Vicarage Road.

As yet uncapped for his country, the 26-year-old harbours hopes of both breaking into the France squad and playing Champions League football.

Watford are among a cluster of teams battling for seventh spot in the Premier League, but they may be without the talented Frenchman next season if his performances continue to draw attention from Europe's elite clubs.

"Everyone knows my ambition," Doucoure told Sky Sports News. "I am playing football to win titles, to play with quality players.

"At Watford I am very happy, but the most important thing for me is to be focused on my performance.

"In the summer if something happens with the club, we will see what happens.

"Playing in the Champions League is one of my dreams and a lot of the squad want to do it as well. I think I can do it in the next few years."

Watford signed Doucoure from Rennes in January 2016, but immediately loaned him to Spanish side Granada, with Walter Mazzari handing the midfielder his Premier League debut the following January.

Now Javi Gracia is the boss at Vicarage Road and Doucoure has become one of the Spaniard's key players, with three goals and six assists in the league this season.

"I love him as a manager, as a person," said Doucoure. "I think everyone loves him at the club, he's a very good manager.

"I like playing under him and I want to improve."

Gracia and Doucoure may be focusing on a strong finish in the league, but with an FA Cup semi-final to look forward to against Wolves, there could yet be a crowning end to the season for both men.

But whether or not Doucoure manages to win some silverware, he hopes the fans remember him fondly should he make a move to a different club.

"Of course, I will always be grateful to Watford for giving me this opportunity and to the fans because they always support us and me in the stadium," Doucoure said.

"I feel very confident here, I feel very happy and I think if I can reach a big club, everyone will be happy for me."