Wayne Rooney will be the 'senior figure' in the new interim coaching set-up at Derby after the club sacked manager Phillip Cocu.

Cocu took over from Frank Lampard in the summer of 2019 and guided the club to a 10th place finish in his first season, but Derby are currently bottom of the table after just one win in 11 matches.

Derby captain Rooney is expected to lead training and team selection, with support from coaches Liam Rosenior, Shay Given and Justin Walker.

Rooney has not been named interim or caretaker manager at this stage, and Sky Sports News does not expect the new full-time position to be appointed at Derby until the takeover by Abu Dhabi royal family member Sheikh Khaled bin Zayed Al Nehayan is completed.

However, the impending deal should be finalised by the end of the month and has been approved by the English Football League, with the Rams' new prospective owners holding talks with current owner Mel Morris and the rest of the club's board on Sunday to begin the process of appointing the new manager.

"Following discussions between the board and the club's new investors, the formal process for identifying the next manager of Derby County is underway," read a statement from the club.

I am sorry that Philip and his staff have left the club and want to thank him personally for all his help and encouragement as part of his coaching staff.

Meanwhile, Rooney said: "I am sorry that Philip and his staff have left the club and want to thank him personally for all his help and encouragement as part of his coaching staff.

"The most important thing now is to stabilise the club and start moving up the table."

Rooney has made no secret of his desire to be a manager and that is what attracted him to the player-coach role at Derby, which he has been doing since December last year. 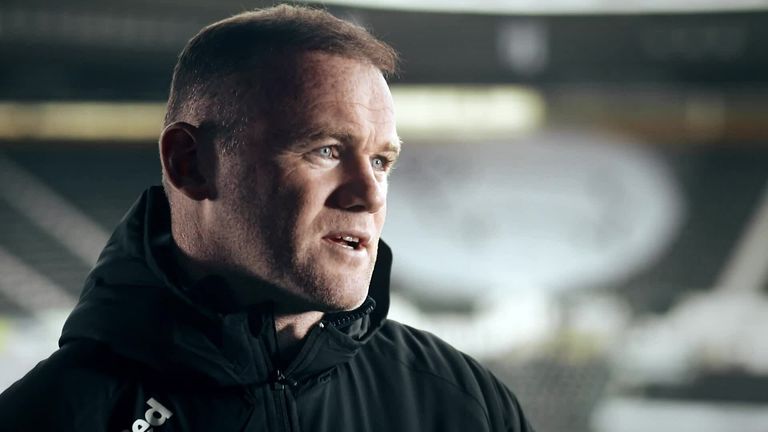 Wayne Rooney discussed balancing playing with coaching, helping out youngsters and more in an interview with Sky Sports last month

He has yet to meet the prospective new owners, and it will need to be a mutual decision if he is to take over as manager long term.

Rooney will want to know more about Sheikh Khaled's ambitions and plans for the club before he would commit to taking his first job in management at Pride Park.

Derby thanked Cocu for his service under what they said were "extremely challenging situations".

The former Barcelona and Netherlands midfielder, 50, is in self-isolation until Friday after being in close contact with Derby chief executive Stephen Pearce, who tested positive for Covid-19 on November 5.

"Although this season has not gone as we all would have liked so far on the pitch, I believe passionately in the project that we started to build and I have no doubt that the future is bright for the club," said Cocu.

Derby also paid tribute to Cocu for his financial contributions and personal efforts towards the club's community projects during the COVID-19 pandemic.

"I wish everyone associated with the club the very best both on and off the pitch, particularly with the Stay Safe, Stay Fit, Stay Connected project that I am very proud of to have initiated," Cocu added.