An independent disciplinary commission has fined Derby County £100,000 for accounting irregularities; the EFL has developed an interchangeable fixture list featuring the East Midlands club in both the Championship and League One, as the threat of relegation lingers due to potential appeals

Derby say they are "disappointed" in the EFL for developing an "interchangeable" fixture list as the threat of relegation still looms over the East Midlands club.

An independent disciplinary commission fined Derby £100,000 for accounting irregularities, while both the club and the EFL have a right to appeal the sanction decision.

It prompted the EFL to announce an "interchangeable fixture list" had been constructed in case any appeal led to Derby being handed a retrospective points deduction and therefore relegated to League One.

The fixtures released on Thursday morning featured Derby in the Championship and Wycombe Wanderers in League One - "pending any appeals relating to this decision".

Derby's club website stated: "Please note that these fixtures are subject to change and at this stage the fixture list is regarded as a DRAFT."

Meanwhile, Wycombe - who finished third from bottom in the Championship in 2020/21 - also noted on their website the EFL had developed another fixture list.

In a statement after the fixtures were released, Derby said the club "looks forward to competing in the Championship in the 2021/22 season".

Derby expressed they were "disappointed" with the EFL for several reasons.

"Although the Disciplinary Commission has yet to publish its full written reasons for its decision, the EFL issued a press release about it and the fixture list last night," the statement said.

"The club is disappointed that the EFL has not, as is usual, waited until after the publication of the Disciplinary Commission's reasons nor agreed a statement with the club and in addition has chosen to be selective about the decision and present it in a form which omit key dates and details." 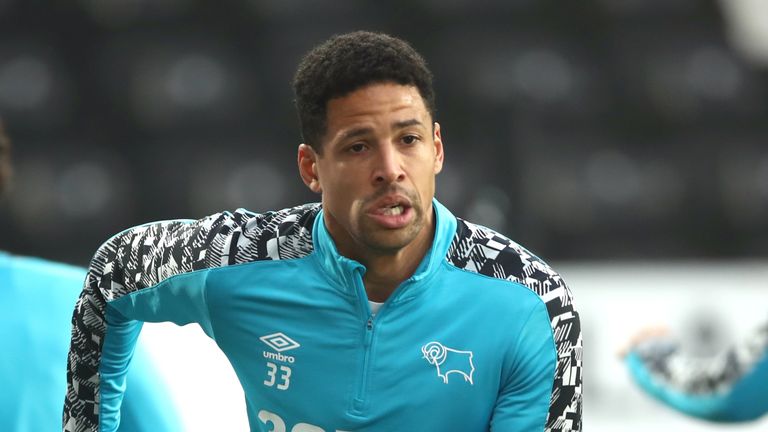 Derby defender Curtis Davies says an interchangeable fixture list makes it very difficult for the club to prepare for next season, as they await confirmation over whether they will be in the Championship or League One.

Derby went on to dispute the appropriateness of a points deduction, adding they do not believe "that it is lawful for the EFL to seek to impose one retrospectively, altering the final league placings after the season has already finished".

Derby's statement concluded: "It [the club] shall not comment further until after publication of the full written reasons of the Disciplinary Commission."

The EFL confirmed the £100k fine in a statement on Wednesday night, adding Derby have been warned about "its future conduct regarding the preparation of its annual accounts".

The original charge against the club was lodged almost 18 months ago. Derby were then cleared of breaching the League's financial rules, but the EFL won its appeal against that decision in May.

That ruling decided Derby had incorrectly recorded in their accounts how they spread the transfer cost of some players over the duration of their contract. This "amortisation" is a legitimate accounting procedure used by all football clubs, but there were said to be "ambiguities" in Derby's accounts.

Derby remain steadfast in their belief they have done nothing wrong.