Raul Jimenez has backed calls for referees to be encouraged to start using pitchside monitors after he was involved in two VAR incidents at the weekend.

The striker saw two goals overturned by VAR during Wolves' 1-1 draw against Southampton at Molineux - one for an intentional handball and the other because team-mate Patrick Cutrone was offside in the build-up.

The Professional Game Match Officials Limited [PGMOL] instructed referees to use monitors "sparingly" before the start of the season to help maintain the speed of play but Jimenez believes the on-field official should be able to review their own decisions.

"I think so because the VAR says the referee has the last decision," Jimenez told Sky Sports News.

Premier League referees will not yet be ordered to use pitchside monitors after failing to review any incidents beside the pitch in nearly 90 games this season.

"Maybe [the referee] has to check what happened to see with his own eyes and then he can decide.

"What I know is the referee has the last decision so maybe he has to check the monitor." 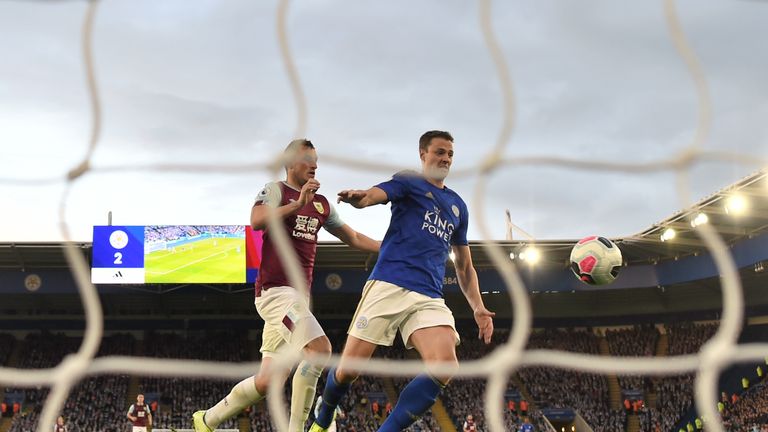 Jimenez conceded the decisions to rule out two of his goals were correct but argued that there is not always a need to use VAR such as for tight offside calls.

"There are some plays [of action] that do not need VAR." he said.

"When we miss a goal we don't have another opportunity to say, 'give me the ball again and I am going to score'."

The Mexico striker would also like to see greater communication by the referee over why goals are ruled out after he revealed it had not been explained to him why his second goal was chalked off.

"Maybe just with the captain and then he can talk with us and say what happened," said Jimenez, whose side face Newcastle, live on Sky Sports, on Sunday.

Wolves have recovered from a sluggish start to the season, which saw them fail to win their opening six league matches, to go unbeaten in their last five in all competitions including a shock win against Premier League champions Manchester City.

"We never felt that we were that kind of team. We knew that we are a good team and we can face the other teams and transmit to them that we can win games," added Jimenez.

"We go to all the matches to win the game. We are a team that have to be respected [and] that we want to be up [towards] the top of the league.

"At the beginning we were not so good but we never lost faith in the things that we have to do."

He added: "It doesn't matter who is in front of you, you have to face the game like a final."

Wolves will continue their challenging schedule in just their second season back in the Premier League with a trip to face Slovan Bratislava in the Europa League on Thursday.

The match will be played in front of what is expected to be a 21,000 crowd - their biggest of the season - despite UEFA initially enforcing a full stadium closure only to then allow children under 14 into the ground.

Asked whether that was unfair, Jimenez said: "At the end they are kids. They are going to be there to enjoy the match.

"Maybe some of them have never been in the stadium so it is going to be strange because you never play a match with so many kids.

"We have to focus our mind on the pitch and it doesn't matter what happens in the stands."