Danny Ings has scored 21 Premier League goals this season leaving him two behind Jamie Vardy in the race for the Golden Boot going into Southampton's final game of the season against Sheffield United. The prize might prove elusive but the praise is everywhere.

Exclude penalties and the Saints striker, who turned 28 on Thursday, has actually outscored every other player in the Premier League by two clear goals himself. Ralph Hasenhuttl, his head coach at St Mary's, is in no doubt as to the scale of the accomplishment.

"It is definitely harder to score 20 goals for Southampton than for Liverpool or Manchester United or Chelsea or whoever," Hasenhuttl tells Sky Sports. "So it is definitely big praise for him that he did it for us - a club that was struggling in the relegation zone for a long time.

"That shows how good he is and how well he has done this season."

During the course of an in-depth analysis of Ings' game, the Southampton boss will go on to outline the key elements of his success. He will explain why he is the team's trigger man in more ways than one and how he is able to force his opponents into their mistakes.

But before all that, there is an acknowledgement that it was not love at first sight.

Ings did score twice in his first appearance under Hasenhuttl. That 3-2 win over Arsenal ensured that the Austrian quickly won over the home supporters. But it would be some time before Ings was to develop into the striker that his new coach wanted him to be.

"What you could also see was that he was not fit." 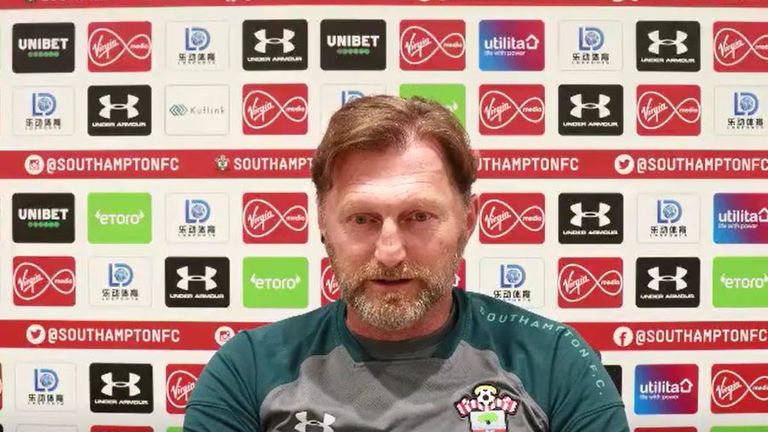 This was the biggest issue that I had with him - that he was not fit enough for my game.

Injuries have been an unfortunate feature of Ings' career. A major knee injury had halted his progress at Liverpool, but more minor complaints plagued him last season too.

"I saw that he had the quality but he was always struggling after 60 minutes. That was his maximum at the beginning. He had all these problems with muscle injuries and it took us quite a long time to bring him up to the level where he could go for 90 minutes. This was the biggest issue that I had with him - that he was not fit enough for my game."

Hasenhuttl places a huge emphasis on pressing and that demands optimum fitness levels. Ings played the full 90 minutes just once under him last season, subbing him a dozen times.

It is a different story now.

Ings recently started and finished five consecutive matches. The sequence was only broken when he was withdrawn deep into stoppage time in the win at Bournemouth last time out. The earliest that he has been substituted since the restart is the 88th minute.

He is up to speed now.

Moreover, he is fundamental to his team's style of play.

Ings himself claims that he has always pressed and there is no doubt that his past has played its part in helping him to adapt to Hasenhuttl's vision. This approach is not alien to him.

He was reminded of the value of hard work by Sean Dyche at Burnley and the possibilities presented by a high pressing game during his time working with Jurgen Klopp at Liverpool.

"Definitely," says Hasenhuttl when asked if that made it easier.

"Oriented. Pressing. Deep balls from behind. Coming from the front. Close to the net. All these were things that I think he had heard before also.

"I do not know how detailed it was and what shape they did it but he definitely knows that the game starts when the ball is gone and not just when you have the ball.

"This is a behaviour others have to learn sometimes."

Hasenhuttl's commitment to his methods is total and it has become a hallmark of Southampton's game. Only the Premier League's top two have won the ball within 40 metres of the opposition goal more times than his side. They are relentless in their pressing.

And it all starts with Ings.

"It is important that he scores," explains Hasenhuttl, "but it is also important that he is our first defender in some moments, especially against the big teams. If you do not stress them and put some pressure on them, then they can do whatever they want and that kills you. But if you can have guys up front who are working a little bit, then it is different.

"This is our first filter. It is a very important position. He is the pressing trigger. When he decides to go, they all have to follow. This is the reason why we need him so much."

It is largely selfless work but sometimes the fruits of his labours are obvious.

Ings' first two goals of this Premier League season came against Liverpool and Tottenham. Both goals were scored as a direct result of him closing down the opposition goalkeeper.

Against Liverpool, he charged at Adrian and intercepted his pass. Against Tottenham, he hunted down Hugo Lloris and earned his reward by bundling the ball into the net.

It is not just goalkeepers either. His equaliser against Crystal Palace in December came when he anticipated a loose pass by Martin Kelly that went between defender and goalkeeper. It would have gone unpunished had Ings not been on the move before the ball was struck.

"He was waiting for the mistake," says Hasenhuttl.

But he soon corrects himself. Ings was not waiting.

It was the same for Stuart Armstrong's opener against Manchester United recently. The reaction of the commentator was that Paul Pogba had given the ball away in the build-up to the goal. It would have been more accurate to state that Ings had taken it from him.

"He has scored goals by winning balls such as the one against Palace when we were pressing and he has had assists from winning balls like against Manchester United.

"He has forced a lot of mistakes."

This energy is not unchanneled. It is a process. The result of hours spent on the training ground. A coordinated effort together with his teammates. It is about how, where, and when this Southampton side win the ball back. And it is about what they do with it afterwards.

"The good thing is that we get more benefit from winning these balls now because we have learned what to do if we get it and how we can use it better to score," says Hasenhuttl.

"This was the next step in our development. In the first season that I was here, we won the balls but then played too slow or did not have players in the right positions so the chance was gone because you do not have a lot of time until the opponent is organised again."

Ings has played an active part in the process.

"He listens, he is open-minded and he likes to learn."

There is the work out on the pitch but there is also the video analysis. The key messages that are drummed into the players. It can be the difference between a 20-goal season in the Premier League and a difficult campaign - as fellow Saints striker Che Adams has found out.

"It is a lot of videos. Showing them all the time. Telling them not to save this run. Telling them this is where they have to be. These are things we are doing now all the time with Che, showing him that he must come to the position where Danny is and then he will score more.

"In the Premier League, you do not have the time to turn and play through two players to score. You must run before the ball comes. Then you will have a chance to score."

This video work has also played its part in helping Ings to score another of his trademark goals. Perhaps you recall it. Three times since the restart, in wins over Norwich, Watford and Bournemouth, he has cut inside from the left and shot right-footed into the far corner.

His first against Watford was arguably the best of the bunch.

"It was nice," he told Sky Sports afterwards. "I really love cutting in from the left and finding that far corner. We watch clips and the spaces were in the No 10 position, which would give me a chance to drop in a little bit deeper and pick it up and get at defenders."

In Italy, they used to call it the Del Piero zone, so often did the former Juventus forward curl strikes into the corner of the net from that position. Hasenhuttl smiles. He remembers it as the Schweini position in Germany - so-called because of the Bayern Munich legend.

Perhaps the Premier League should know it as the Ings zone right now.

Whatever the name, it is no accident that he continues to engineer space in that area of the pitch. It is by design and it is something that Southampton work hard to achieve.

"This is what every coach does - or should do," says Hasenhuttl.

"This is the only chance for your team. Show them the spaces they can use. Bring them there. The rest is about individual quality. When he is in the space, he can score."

That is what Ings has done 21 times and counting in the Premier League this season. Given that form, he could be forgiven if he is feeling frustrated by the postponement of Euro 2020. The tournament could have been well timed for him to make an impact with England too.

But perhaps next year will be even better.

"I do not know whether he will score 20 goals again," says his club coach. "But I do not see any reason why he cannot improve. You never stop developing your players."

Listening to Hasenhuttl, Ings' remarkable record is easy to understand.