Inside Stoke’s academy: Why the club's long-term future is bright

Stoke find themselves in the Premier League relegation zone but a mood of optimism surrounds the club’s long-term prospects thanks to their thriving academy. Adam Bate met up with academy director Gareth Jennings to find out more about how Stoke - who face Leicester on Saturday, live on Sky Sports - hope to become ‘a magnet’ for young talent by providing a clear pathway to the first team…

"It feels like in the Lion King when he looks out," laughs academy director Gareth Jennings. He has just opened the glass patio doors of his office that lead out to a balcony overlooking the many pitches at Stoke City's vast training ground. "I think it does wow people a little bit," he adds. It is not quite the Serengeti but he's right. It is an impressive sight.

Jennings was a schoolboy, scholar and professional here himself in his playing days but this was a very different club back then. His memories are of training sessions around the back of the old Victoria Ground, but the transformation has been spectacular since the Coates family's investment first helped to construct this new training facility in 2010. 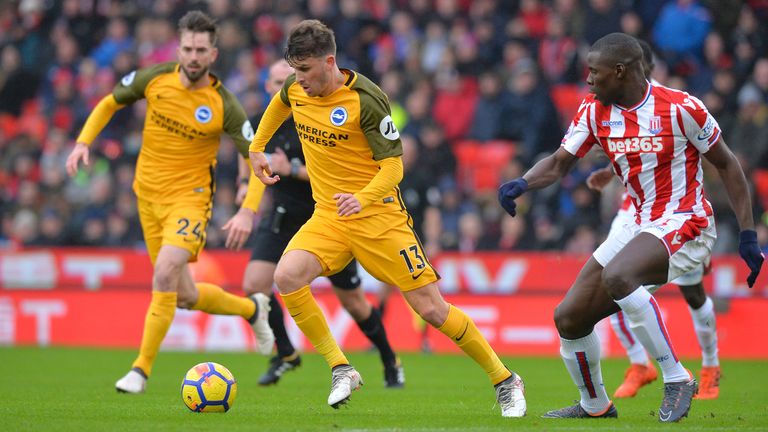 Now this is a category one academy with hybrid pitches and a hydrotherapy pool. At the start of last season, Stoke added five more academy pitches - two seven-a-side, two nine-a-side and one five-a-side - underlining their commitment to youth development. The club is beginning to see the results of that investment. Players are breaking into the first team.

Stoke's youngsters made it through to the semi-finals of the FA Youth Cup last season. Julien Ngoy made his Premier League debut that year and has been followed by local boy Tom Edwards this term. Fellow graduates Thibaud Verlinden and Harry Souttar have been involved in the cup competitions, while Tyrese Campbell is knocking on the door too.

For Premier League clubs, this is the final frontier. Jennings even references the famous line from the NASA janitor who reportedly told President Kennedy in 1961 that he was helping to put men on the moon. Everything at Stoke's academy is geared towards one goal - putting a player into a Premier League team. There are times when it feels just as tricky.

"It is like putting your foot on the moon," says Jennings. "It is so difficult." But now a picture of Edwards has been added alongside the rest of those that adorn the walls of the training ground. His image is right there with the great Sir Stanley Matthews and the aim now is to create a new tradition at Stoke. "Tom has done tremendously well," adds Jennings.

"He came through from the U9 team. It is almost unique. He has seen all the changes back to when this was just a field and a portacabin. He has seen the complete development of this site. It is a huge credit to him and it is hugely inspirational for every other boy here. They all wanted to watch him on his debut. They are desperate to go and see him play.

"The fact that this pathway is now a lot clearer for everyone at Stoke City, because of the amount of money that the Coates family invests and the support we get from the chief executive around young players, it has to be a selling point for us. It becomes this magnet. Stoke are a club that gets boys over the line and gives them opportunities."

The need for a unique selling point is understandable. The big beasts of the North West are just a few junctions up the M6, while Stoke are one of six category one academies in the Midlands alone. The challenge is to find an edge on the rest. "The facilities are fantastic but you could go into a lot of those clubs and the facilities would all be fantastic," says Jennings.

We want players to have a better chance of becoming a professional footballer at Stoke than at any other club in the country.

"The big thing we can offer is that there is going to be a clear pathway to our first team. We get a lot of enquiries from lads who are getting released at those big clubs. I think young players are looking at Stoke now and thinking it is a great option for them. It is hard to turn down those clubs but ultimately they want to be professional footballers.

"Parents, in particular, are starting to recognise that long-term view. What I have always thought about young players when they sit down to discuss terms is that they should not be asking for money they should be asking for opportunity. The money comes after. The concern should be fulfilling your potential. So what is the pathway going to look like?

"Our technical board is made up of myself, the chief executive Tony Scholes, the manager Paul Lambert and the technical director Mark Cartwright. We share detailed plans for each individual player. What will next week look like for them? What will next year look like for them? When will they make their first-team debut? We look hard at that pathway."

From the outside looking in, Lambert's involvement seems far from inevitable. He was parachuted in as Mark Hughes' replacement with only 15 games of the season remaining and Stoke in the relegation zone. With their Premier League future still in the balance, Lambert could be forgiven for refusing to focus on anything beyond that short-term concern.

Instead, he had been to watch Stoke's U23 team play Norwich at St George's Park even before his appointment had been confirmed. He has attended every game since. As well as the regular meetings, there have been masterclasses for the academy coaches in order to outline how Lambert wants training to look at every level of the club.

"The bit that really grabs hold of you when you meet Paul and his staff is that they are real students of the game," says Jennings. "They have an interest in new articles about training methods. Paul is someone who is tactically astute and really switched on in terms of whole club development. He knows what this club is about and he is supportive of that.

"It fits with our philosophy. He has not just come in and had the attitude that the focus is all on staying in the Premier League. Yes, he is focusing on that but he still recognises that if he can take players from the academy then that is an opportunity for him too. It has been really positive. He has ensured that the academy still feels part of this one-club mentality."

One site and one club

At Stoke, that is far easier than at many other clubs. Crucially, the senior squad are based in the same building as the academy players. As Jennings walks around the complex, while the first team are being put through their paces, a group of youngsters are a matter of yards away training on an adjacent pitch. "It is hugely beneficial," he explains.

"I was at Bristol City and we had two different sites there. It was very difficult for the academy manager to manage that process of boys going across. It is different here. The academy players had 4500 training minutes with the first team last year. I think we have more youngsters than any other club actually training with the first team."

There are psychological advantages as well as practical ones. For Stoke's youngsters, the prospect of becoming a first-team player is a tangible one. They all share a canteen. The players' physical data is there on the noticeboard alongside their own. They can see clearly what is required. The hope is that it all helps to make the leap more manageable.

"Here, the first time that a young lad is up against a player like Xherdan Shaqiri in training, it isn't going to be completely alien to them because they have seen him around the building and they have spoken to him," adds Jennings. "There is still that wow factor of training with the first team but it isn't completely new to them and that definitely does help.

That family feel comes from the top. "We have owners who are regularly here talking to the young players," says Jennings. But it seeps through at all levels. Former Stoke players Kevin Russell and Andy Wilkinson coach in the academy. Wade Elliott is the U23 coach in part because Jennings heard good reports about how he helped young pros in his playing days.

Elliott's team beat Fulham 4-1 at the weekend with young forward Campbell impressing once again with a hat-trick. The calls for his inclusion in Lambert's team to play Leicester this Sunday are growing. Jennings would not rule out Campbell making an impact but he prefers to focus on the significance of the player's decision to come to Stoke in the first place.

"He was at Manchester City all the way through," he says. "But he saw that there was a pathway at Stoke and decided this was the best place for his development, which is great." Campbell is not the only talent in that U23 side. There are high hopes for Lasse Sorensen and Kris Szereto too. Each knows that Lambert will be monitoring their progress.

If any or all of them are able to take that next step it will be another fillip for an academy that Jennings admits is still seen as a "hidden gem" but aspires to be much more. While there are fears that the decisions of Huddersfield and Brentford to close their own academies could spark a worrying trend, there is no chance of Stoke following suit.

"Looking at it from a financial perspective, I understand the frustrations," says Jennings. "But an academy is more than that. It is the heartbeat of a club. If you go to a training ground and the academy players are not there and it's just the first team training, then it is almost a dead site. I think you need young players around a club. It inspires people."