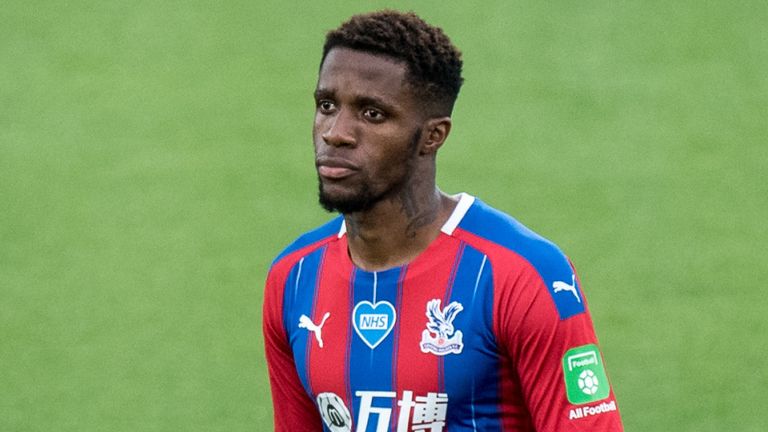 Sky Sports News' Dharmesh Sheth has the latest news on the future of Crystal Palace's Wilfried Zaha who is attracting interest from a number clubs.

Arsenal and Everton tried to sign Zaha last summer but his representatives believe he was being priced out of a move with Palace asking for £80m.

Zaha wants to leave Crystal Palace and the club are prepared to let him go for the right price.

In July, Palace manager Roy Hodgson said there were question marks about Zaha's future at the club.

"It's a dilemma for the club and a dilemma for him if he is so set on leaving," Hodgson said. "If he feels he just does not want to be with us any more, that would be sad.

"We still like him very much, we can't make him like us. This is a situation that only he and the club can sort out. I don't have an answer."

Zaha has three years left on his Palace contract. He would ideally like to leave to play for a club in the Champions League. Zaha is attracting interest from a number of clubs across Europe

Uncertainty over the futures of Neymar and Jadon Sancho mean PSG and Dortmund have expressed an interest in signing Zaha as a potential replacement if they sell either of those players.

Should Zaha depart Selhurst Park, they could replace him with QPR's Eberechi Eze. Palace remain in talks having already had a bid rejected for the player. QPR are holding out for around £20m for Eze.

When asked about the player's future, Mark Warburton told Sky Sports on Monday: "Eberechi has maintained his form since January all the way through and was outstanding for us last season.

"In my mind, he's got more than enough ability to step up and play at the highest level in the Premier League. The boy can go as far as he wants to go. His character both on and off the pitch is quality and he's a delight to work with.

"It's about the right move and every party needs to feel like they've got value - the buying club needs to feel it fits into their financial structure and likewise us at QPR need to get value for one of our top assets."