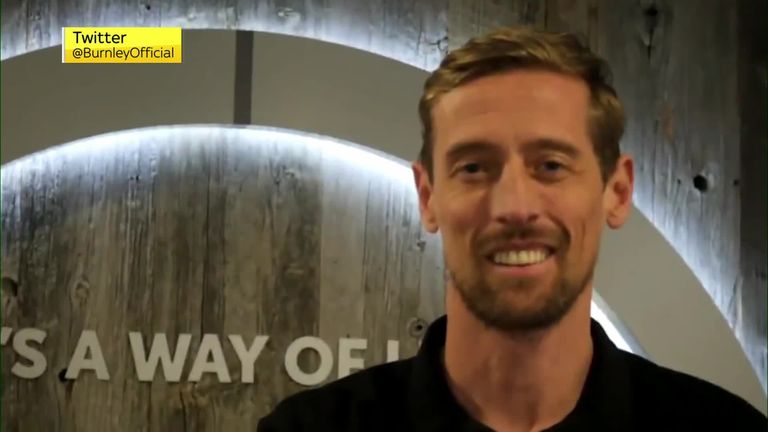 Peter Crouch has returned to the Premier League after joining Burnley from Stoke on Deadline Day, with Sam Vokes heading in the other direction.

Sky Sports News understands Crouch - who has joined until the end of the season - was involved in a part-exchange deal for 29-year-old Vokes, who will cost Stoke £7m plus add-ons after signing a three-and-a-half-year contract.

It is understood Wolves will receive at least £1.7m of the fee Stoke have paid Burnley for Vokes.

Thankyou to everyone fans, players and staff @stokecity I had some great times !! Cant wait to get started at @BurnleyOfficial 😬

The former England international has 108 Premier League goals to his name, and says he is "hungry" to add to his tally as he targets playing until he is 40.

"I still want to achieve things. I want to get more games in the Premier League and I would love to add to the 100 Premier League goals," Crouch told Burnley's website.

My game has probably changed a little bit. I'm not 25. But my attributes haven't waned. I never really had blistering pace, so I haven't lost that.

"My game has probably changed a little bit. I'm not 25. But my attributes haven't waned. I never really had blistering pace, so I haven't lost that.

"I know I can impact games at this level. I scored goals last season in the Premier League and I know I will do the same again if given the opportunity this year.

6 - @petercrouch has scored for six different clubs in the Premier League; only Craig Bellamy (7) has scored for more in the competition. Collection. pic.twitter.com/yBlhpJrcMj

"I feel like the older I get, the more hungry I get. You can sort of see the end. I still feel fit, I train every day and I do everything the lads do. I want to be involved in every single game. I'm hungry and I have the will to succeed and hopefully prove people wrong.

"I remember when Mark Hughes was manager (at Stoke). I think he played until he was 40-odd and that was a target I had.

"I'd love to do that and hopefully I can do that in the Premier League with Burnley."

Meanwhile, Vokes arrives at a Stoke side sitting 15th in the Sky Bet Championship table.

The club are eight points off the play-off spots, and manager Nathan Jones is hopeful the Wales international's pedigree can help the club going forward.

"Sam is a player of real pedigree, he has been promoted from this level and he's an experienced international and Premier League player," Jones told the club's website.

"To get it done is something totally different to anything we have and we think he's a marquee player for this level.

"We know he's a good character so he'll add something to our dressing room and we're bringing him in because of his goal-scoring pedigree and what he does."

Sky Sports News understands Wolves will receive at least £1.7m of the fee that Stoke have paid for Vokes.

Wolves included a sell-on clause when they sold Vokes to Burnley in 2012, guaranteeing 25 per cent of any future fee.