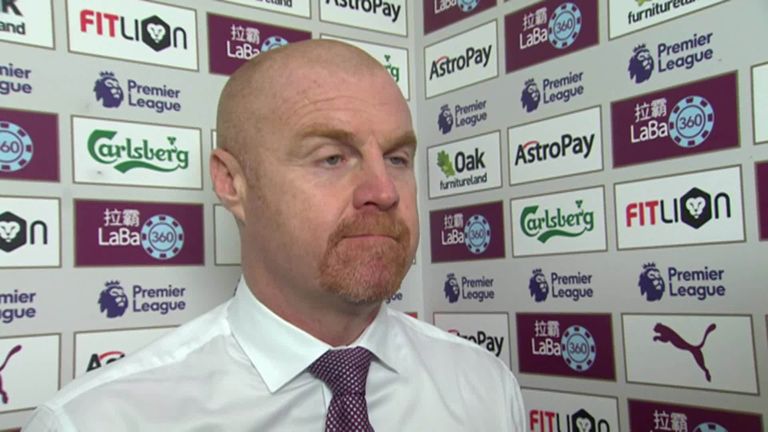 Burnley manager Sean Dyche hailed the impact of teenager Dwight McNeil after his third goal of the season sealed a 2-0 win over Wolves to ease the Clarets' Premier League relegation worries.

McNeil returned from an international break which saw him training with the England senior squad to play a starring role as Burnley marked Dyche's 300th match in charge with victory.

It was his free-kick which led to Burnley's second-minute opener, an own goal by Conor Coady after Chris Wood's shot hit the post, and the 19-year-old made sure of the points 13 minutes from time.

McNeil now has three goals and four assists, putting him level with Fulham's Ryan Sessegnon for the most goal involvement by a teenager in the Premier League. Highlights from Burnley's win over Wolves in the Premier League

"It's his first half a season really and he's played very well," said Dyche, who has made McNeil a regular in his side since Christmas.

"We were looking at him earlier in the season, but it is the timing of it. People talk about (goalkeeper) Tom Heaton coming back into the team, but he's definitely played his part in how we've begun to turn things around.

"When you're young like him, fearless in thinking, in tough situations and pulling out things that count in games; that shows the talent, mentality and strength he has.

"He will continue to grow and mature and progress because he's some player for a 19-year-old."

Dyche admitted he was about to substitute McNeil when he scored the all-important second, taking advantage as the Wolves defence stood off him to angle a shot into the far corner.

"I was leaving him on because I knew exactly when he was going to score," Dyche joked. "It was one of those crystal ball moments, I have that intuition."

Burnley had lost four on the bounce coming into the game to slip back into trouble, but the win lifted them five points clear of 18th-placed Cardiff, who have played two games fewer, but will be the next visitors to Turf Moor on April 13.

"It's a strange situation we're in," Dyche said. "We had lost four, but that's 21 points since Christmas. That's a very healthy return.

"Now we have to continue that obviously, but we deserved it today because we have worked hard."

Dyche's 300th game in charge ended in identical fashion to his first, a 2-0 win over Wolves in November 2012.

"My first win was important because it was my first game and I wasn't flavour of the month coming in, probably only 50 per cent of the fans wanted me if I'm being honest," he said.

"It was important to get off to a good start but to get a win today has a different importance."