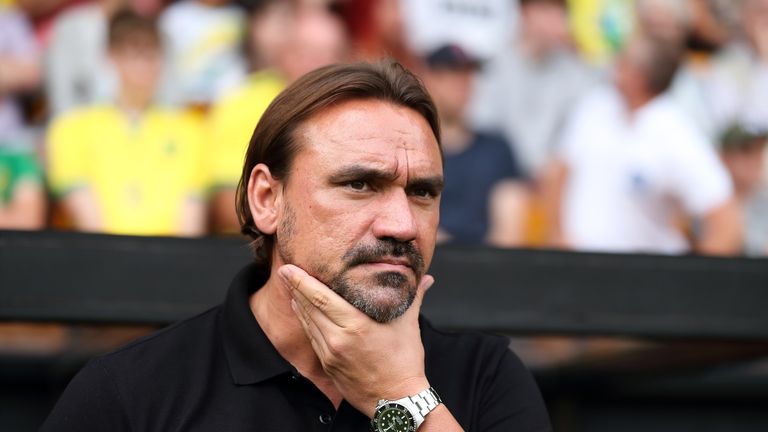 Daniel Farke says his Norwich side "can't park the bus" against Manchester City "because I have no defensive players".

The Canaries have been hit by an injury crisis ahead of welcoming the Premier League champions to Carrow Road on Saturday, live on Sky Sports Premier League.

Defenders Max Aarons, Christoph Zimmerman, Timm Klose and Grant Hanley are all ruled out, while Ben Godfrey is also a major doubt after returning from England U21 duty with a groin strain.

That leaves Jamal Lewis, Sam Byram and Philip Heise as the only fully fit first-team defenders, with new signing Ibrahim Amadou likely to move into the back line from his regular central midfield role.

💬 DF: Zimmermann is out until January. His ligaments are okay but it's a complicated injury. #ncfc

💬 DF: Tom Trybull is out. He damaged his ligaments against West Ham. He won't come back before the next international break. #ncfc

💬 DF: Mario Vrancic is not available for tomorrow, he has a calf strain. Max Aarons is also out, he could be back after the next international break. #ncfc

💬 DF: Tim Krul is a minor doubt for tomorrow. I may have to name three goalkeepers in the squad. #ncfc

Farke admitted Norwich may have to name two goalkeepers on the bench to simply make up the numbers in their matchday squad.

"There were more lads today on the physio bench than on the training pitch," Farke said. "It is a tricky situation for us.

"We are playing one of the best teams in the world, if not the best, and as a newly promoted side you always have to be at your best.

"Our injury situation is not easy at the moment but we will try to handle it anyhow."

Norwich have gained both credit and criticism for their ambitious passing style so far this season, with some pundits accusing them of being too naive.

Last year's Championship winners have managed just three points from their opening four matches, but Farke is planning to stick to what he knows against Pep Guardiola's team.

"Manchester City are exceptional, they are so special," he said. "If you just try to park the bus then you have no chance.

"It is important that you have periods where you control the ball and are in possession. We will have to be top class in our defending and disciplined.

"It will be also important that we bring our style and try to dominate possession and be good with the ball.

"Even if I wanted to, I can't park the bus because I have no defensive players anymore. We will have to concentrate on our skills."

Norwich and Manchester City are the Premier League's top entertainers this season, producing 33 goals in just eight games between them, writes Adam Smith.

City have maintained their free-scoring antics from last term with a league-topping 14 goals to date, but Norwich also rank impressively in fifth with six goals - level with Arsenal, Chelsea and Leicester.

Man City's fixtures have produced 4.25 goals per game this season, while Norwich average 4.00.

Sergio Aguero tops the scoring chart with six to his name, followed by team-mate Raheem Sterling on five - who is level with Norwich striker Teemu Pukki.

At the other end of the pitch, City are also watertight with three conceded - only Crystal Palace have shipped fewer. But the same cannot be said for Farke's side, who have conceded a league-high 10 so far.

The Canaries' tough opening schedule undoubtedly exaggerates signs of defensive frailties, but Farke is likely to stick to his attacking principles in an unchanged 4-2-3-1 this weekend against the league's most prolific finishers.