Shae Hutchinson, 19, is in need to a new kidney to maintain his Premier League dream 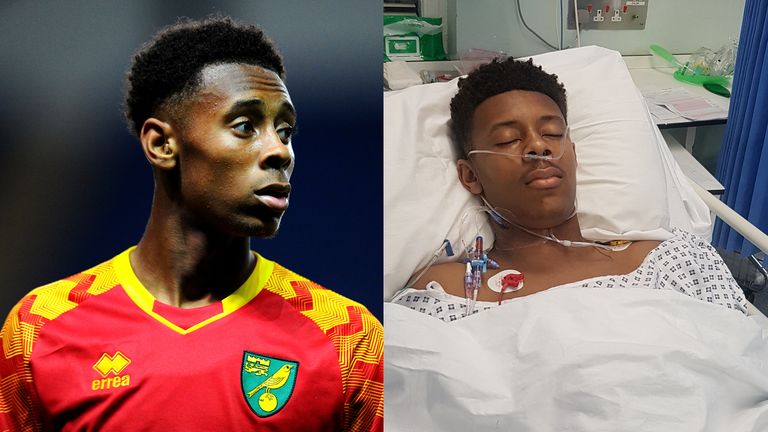 Norwich youngster Shae Hutchinson has vowed not to let the fact that he needs a new kidney prevent him from fulfilling his dream of carving out a career as a footballer.

The 19-year-old has a hereditary condition called Alport Syndrome - which along with affecting his hearing and eyesight - means the kidney he was donated by his father in 2018 is now functioning at just 17 per cent.

Hutchinson, who joined Norwich from Arsenal as a 16-year-old, suffers from extra fatigue as a result of his condition but says he has slowly learned to adapt to it.

"My dream, my goal is to play for Norwich's first team and hopefully once I get this over and done with and I get back on the pitch hopefully I can get to that level," the Norwich U23s striker told Sky Sports News.

"I will never let anything get in my way. I have been determined from the start. You have to chase your dreams. If you love it go get it.

"Health comes before football. I know that.

"But it gets me frustrated how I can't play 90 minutes because I am getting tired quicker than everyone else. But I have to understand that and I do understand it."

Hutchinson hid his condition from the staff at Norwich for fear of being turned away but the club have been incredibly supportive, tailoring his training programme so that he has one session less a week and holding regular wellbeing meetings with him.

"He wants to be a footballer so much. He was scared that if he told us the truth that would be taken away from him," said Norwich U23s manager David Wright.

"Now he understands that is not the case. The football part is secondary. He needs a kidney transplant because it is very, very serious stuff in terms of his own health."

"It's not like we judge them as just a piece of business," he said.

"Of course we are all happy when they are successful and can have a great impact for Norwich City, but we always judge them as human beings. We look after them and I think Shae is in the best hands."