"I still have to pinch myself. It's a bit crazy that not too long ago I used to go and watch them and ball boy at the game," says Hamza Choudhury. "It's amazing."

For the Leicester midfielder it has at times felt like a surreal rise from Foxes ball boy to playing for his local team in the Premier League.

He has fond memories of looking on from the sidelines, admiring Andy King's performances in the middle of the park as Leicester won the League One title. And then the Championship. And then the Premier League.

"Kingy is one who really stands out for me," Choudhury tells Sky Sports via a video call, as he reflects on watching Leicester as a boy, ambitious of making his way through the youth ranks.

"I feel like what he's done is amazing to be honest and he's the most genuine, humble, hard-working guy I've come across. I feel like Kingy is someone I've constantly watched."

Now it is time for Choudhury to try to carve out his own starring role in Leicester's midfield.

The 22-year-old's development has been praised by boss Brendan Rodgers this season - particularly after a game-turning cameo in the first leg of Leicester's Carabao Cup semi-final tie with Aston Villa.

But in team-mate Wilfred Ndidi, Choudhury knows he has real competition for the holding role in Leicester's midfield.

Ndidi's 4.4 tackles per 90 minutes is the highest in the Premier League this season and significantly higher than the next-best central midfielder, Oriol Romeu on 3.2. When injury kept him out of a five-game run Leicester took just two points from a possible 15.

Choudhury's aim is to become just as integral to the team.

"To be honest I think Wilf has had a really good last couple of seasons," says Choudhury. "With us doing so well this season it has brought more attention on what he does but I feel like everyone in the team knows how important he is to us and how effective he is.

Choudhury's determination to improve is a repeated theme of the interview. And in boss Rodgers, he has a manager who takes great pride in focusing on the detail with each of his players. It's a combination which should pay dividends for the ambitious Choudhury.

"I feel like he's come in and many aspects of my game have improved," Choudhury says of Rodgers.

"He works a lot personally with me and the other boys on a lot of video analysis and little bits after training which we can work on to get better and hopefully take us to the next level.

"I feel like at the level our game is at now, it's needed [video analysis]. All the top players do it and you have to be able to adapt and learn new situations." 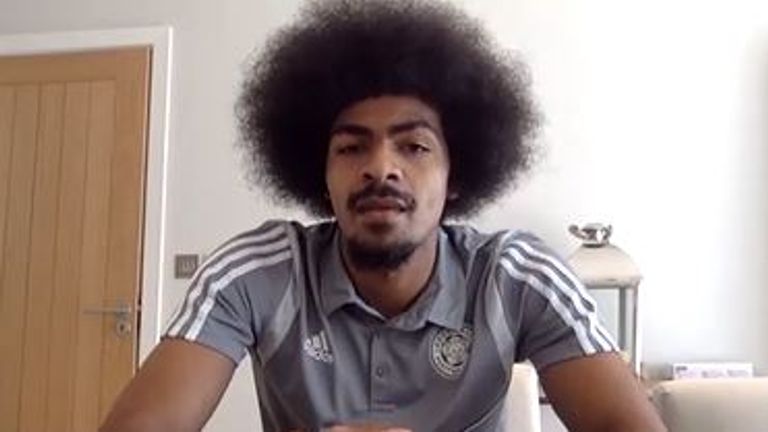 With his distinctive hairstyle - his mates have joked that hairdressers being closed during lockdown hasn't been a problem for him - and his tough tackling, Choudhury stands out on the field.

His performances are closely watched as far away as Bangladesh, where he has family - "it's amazing to get nice messages from people in the community" - and he is already a role model for aspiring British-Asian footballers in the city.

"If I'm affecting it in a positive way, it's something I'm really proud of and hopefully I can carry on doing," he says modestly.

But Choudhury is adamant he hasn't reached where he wants to get to yet.

The former ball boy wants to become a first-team star at Leicester. And then break into Gareth Southgate's England squad in the near future, too, as his Leicester team-mates Ben Chilwell and James Maddison have done.

"It's a goal I've set to play for England and I'm working hard to get close to. But at the minute I'm trying to keep my feet on the ground and work as hard as I can for Leicester and try to establish myself in that team before thinking about England," he said.

"I've really enjoyed it this season and obviously with the success that's come with it I think we were all gutted that it's been stopped at such a time but hopefully if and when it carries on we can kick on again and secure that third spot.

"I feel like it's so important for us to keep on top of our fitness, especially when we go back to hit the ground running and carry on the way we were."