Marcelo Bielsa and Antonio Conte have never faced each other as managers but Sunday's encounter between Leeds United and Tottenham will not be the first time they have met.

This week, photographs emerged from a 2015 coaching seminar given by Bielsa at an Italian Football Federation awards ceremony in Florence. As he holds court in front of a large audience, Conte, in charge of Italy at the time, sits rapt in the front row.

Conte is just one of many managers to have sought insight into Bielsa's methods - the enigmatic Argentine is among the most revered coaches in the game and counts Pep Guardiola and Mauricio Pochettino as his disciples - and the admiration is mutual.

Bielsa described Conte as "a reference in world football" in his pre-match press conference on Friday. "His style of play distinguishes him from all other managers," he said. He is a coach, Bielsa added, who gets "very high performance levels from his players".

Conte, a winner of multiple domestic titles with Juventus, Chelsea and most recently Inter Milan, is now tasked with reviving Tottenham's fading fortunes.

For Bielsa and Leeds, though, the focus is to build on a run of three Premier League games without defeat, and to ensure Conte's first home game in charge of Spurs ends in disappointment for him.

In order to do that, Bielsa knows they will need to successfully combat the unique challenges posed by a Conte team.

"When they attack, they attack with a lot of players and without fixed positions," Bielsa tells Sky Sports after his press conference.

"It means you have to read the game in a way which is not simple because of the distribution of their attacking players.

"Then, when they defend, there is a very noticeable reduction in the spaces. It's difficult to loosen or destabilise such a compact set-up - especially as their defenders cover the full width of the pitch.

"Their team stay very close together, the players are closely linked to each other, and the transitions are fast.

"They always make sure the distances between the lines are reduced when they are defending and also, every player, in his sector, is involved in defending and then in getting away from his marker."

Like Bielsa's teams, who use a man-marking system all over the pitch, Conte's are easily identifiable, partly because of the 3-4-3 formation regarded as the Italian's trademark.

Indeed, Conte has started his last 147 league games as a manager with a back three, including Tottenham's goalless draw with Everton two weeks ago. It is a run which dates back to the mid-season switch which propelled Chelsea to the Premier League title in 2016/17.

That year, many panicked Premier League managers tried to stop Conte's side by abandoning their favoured formations and matching Chelsea's shape. Many failed. Bielsa, who typically uses a 4-1-4-1 system, is wary of falling into the same trap.

"No, no, not us," he says when asked if he is considering a change on Sunday. "Their system is not only about the distribution of the players on the pitch and where they are positioned.

"I would almost say, in terms of their style of play, the positioning is actually the least important thing. What you really have you prepare for is a dynamic and intense game with a constant back and forth."

Bielsa will have noted Conte's immediate impact in that regard.

In his first game in charge of Spurs against Everton before the international break, they recorded by far their highest totals of the season for both sprints and distance covered, running a full 10km further than they did in Nuno Espirito Santo's final game at the helm against Manchester United.

Conte will expect his players to build on that at the Tottenham Hotspur Stadium, but Leeds are of course well-equipped to cope given the physical demands they continue to meet under Bielsa.

This season, collectively, they average nearly 30 sprints per game more than any other Premier League side. Perhaps it is Tottenham, not Leeds, who will need to try to keep up.

If Leeds are to emerge victorious from what promises to be a frenetic encounter, it will likely have a lot to do with Kalvin Phillips.

The 25-year-old, who continues to grow in stature with England having just won his 18th and 19th caps for Gareth Southgate's side, remains a hugely influential figure for his club.

Indeed, since the start of last season, Leeds' win rate drops from 45 per cent to just 21 per cent when he is not in the team. There is nobody in the squad who interprets the role of deep-lying playmaker in Bielsa's system, both in and out of possession, quite like him.

"He is a player who is a very good passer, both over short and long distances, and he always knows what's happening around him," says Bielsa.

"He knows how to assess danger and he takes good decisions on the pitch. He is good at knowing which threat he needs to neutralise as a priority at any given time.

"These are qualities which can be quite difficult to notice in the sense that the players are deemed to either play well or play badly.

"But there are lots of factors that allow that to happen in a game."

Phillips' England breakthrough has won him admirers up and down the country but his quality has long been apparent to everyone at Leeds, where the academy product is known as the 'Yorkshire Pirlo' in reference to a player who shone under Conte at Juventus.

Does Bielsa see the similarities between them?

"Yes, they have things in common," he says. "The area in which they play, for a start, and their understanding of the game. Like Pirlo, Phillips is a player who knows how to organise the possession play."

It is Diego Simeone, though, Bielsa's deep-lying midfielder when he managed the Argentinian national team between 1998 and 2004, who Phillips most reminds him of.

"They are both combative players, players who are comfortable when there are disputes or there is friction on the pitch," he explains. "Simeone, of course, also had very good passing ability."

It is high praise for Phillips, who will need to excel in both of those areas if Leeds are to contain the duel threat of Harry Kane, reinvigorated after back-to-back hat-tricks for England during the international break, and his strike partner Heung-Min Son. 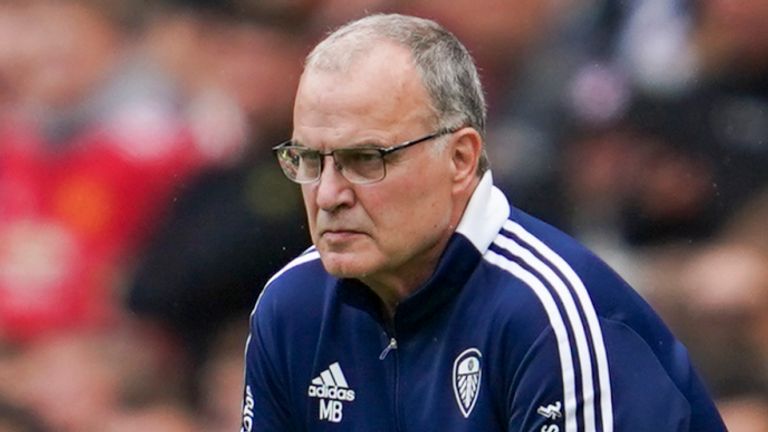 Is Bielsa excited by what might be in store? "It is always difficult to anticipate the quality of a spectacle," he says. "Normally, the opposite happens to what you predict and expect.

"But the objective of the two teams is going to be the same; to make sure our attackers impose themselves on the game and to prevent the opponent's attackers from doing the same.

"We will see what happens."

For Bielsa and Conte, from opposite sides of an Italian auditorium to opposing dugouts at the Tottenham Hotspur Stadium six years later, it is almost time to find out.

PART 2 | Oliver Yew and Ben Grounds look at the contrasting impacts of Jack Grealish and Gabriel Jesus this season, and discuss Fabien Delph's surprise return to form with Everton, ahead of his side's trip to a club he won two Premier League titles with.