Report and highlights from the Sky Bet League One play-off semi-final second leg between Sunderland and Lincoln at the Stadium of Light as Tom Hopper's second-half goal earned the Imps a 3-2 aggregate win and their spot in the final. 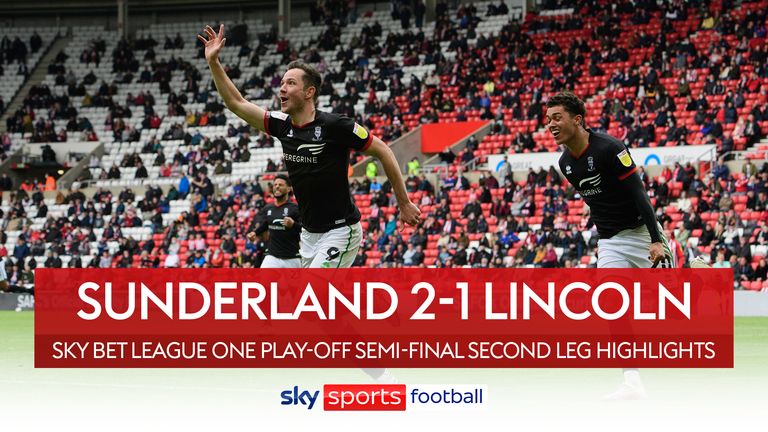 Highlights of the Sky Bet League One play-off semi-final 2nd leg between Sunderland and Lincoln City.

Lincoln earned their spot in the League One play-off final after a 3-2 aggregate win against Sunderland.

The Black Cats had looked on course to overturn the two-goal first-leg deficit in the semi-final tie at the Stadium of Light, thanks to early goals from Ross Stewart and Charlie Wyke, but Tom Hopper headed home after the break to send the Imps to Wembley despite a 2-1 defeat.

Only Blackpool - who saw off Oxford on Friday night - now stand between Lincoln and a first return to the second tier since 1961. The final takes place at Wembley on Sunday, May 30.

Lincoln fight back to reach Wembley

It was an attacking line-up picked by Lee Johnson, who made four changes from the first leg to try and turn the tie in his side's favour. And it paid dividends after just 13 minutes as Stewart, one of those changes, hauled them back into the tie by turning in Aiden McGeady's cross from close range.

The first half was one of complete dominance from Sunderland and after 33 minutes they deservedly levelled the tie. Wyke had missed a glorious opportunity not too long before, but quickly recovered and took advantage of yet another brilliant McGeady cross to make it 2-0.

The turnaround could have been complete before the break too, had the referee pointed to the spot for a possible trip from Lincoln goalkeeper Alex Palmer on Stewart, but the referee waved the claims away of the Sunderland side and their 10,000 fans in attendance.

Michael Appleton made two changes at half-time as he brought on Conor McGrandles and Joe Walsh, and the game soon turned back in Lincoln's favour as Hopper restored their lead in the tie on 56 minutes by heading home a Grant corner.

While Grant could have put the game to bed himself from the penalty spot seven minutes later after McGrandles was tripped by Josh Scowen in the box, but Burge - who gave away the costly second goal in the first leg - made a brilliant save to keep Sunderland in the hunt.

And that hunt would continue until the final whistle, as McGeady hit the post before Wyke fired wide from the rebound. But they couldn't level the tie again, and Sunderland now face the reality of a fourth-straight season in League One. 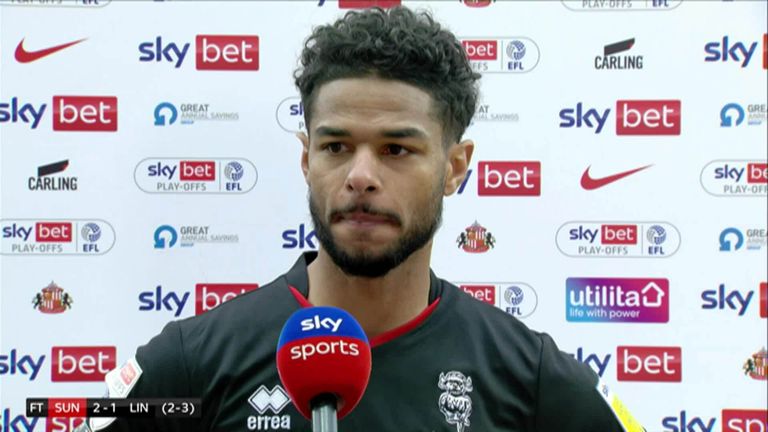 Liam Bridcutt says Lincoln showed their inexperience in the first half of their play-off second leg against Sunderland but that the team’s quality ultimately shone through. 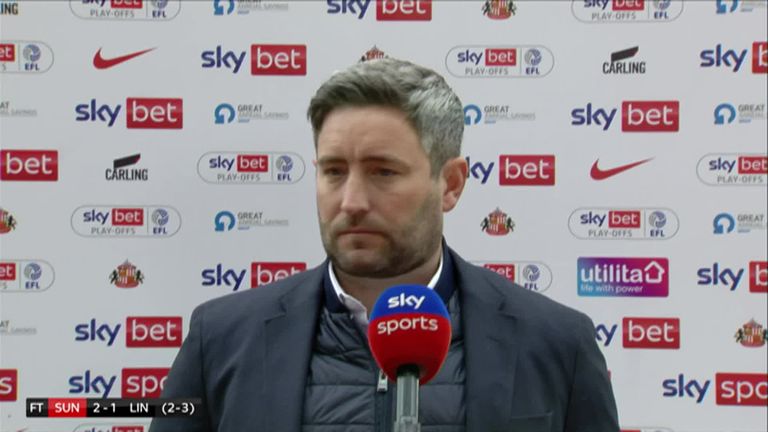 Although pleased with his team’s performance against Lincoln, Sunderland head coach Lee Johnson admits his side ultimately have not been good enough this season.

Sunderland's Lee Johnson: "First and foremost the boys and we are devastated. The fans were absolutely fantastic today, they played their part in the performance we needed, particularly in that first half.

"The pressure we put Lincoln early was outstanding, the front two worked their socks off to hustle and harry and cause problems. We obviously got the goal at a good time and then the second goal at a very good time and then should have had a penalty in our opinion to have the chance to make it three.

"It is a difficult moment as the boys and everybody have worked so hard and this is a really big club in which you see today. And we have to earn the right to be at the next level and for whatever reason over the 46 games and the playoffs, we have not. And therefore we have to show the standard, which I thought we did in the first half and for part of the second half. And we have to keep building on that..." 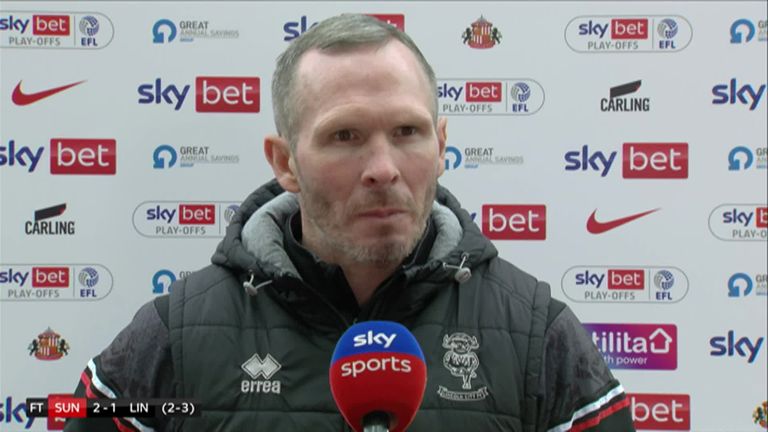 Michael Appleton admits he did not recognise his team’s first half performance in their play-off second leg against Sunderland and had to have some strong words with them.

Lincoln's Michael Appleton: "I was really disappointed with the firs half, I did not recognise us as a team. I just got after them with a little bit of old school. I just wanted to see personalities, be brave and get on the ball, pass the ball and we got that in the second half.

"I just said that to them at the end that we have passed a massive test in the second half because we were up against it in the first half, we had a lot of young players who had not experienced that before. And for them to come and turn it around in the second half like they did, I'm just delighted for them.

"They (the half-time subs) were outstanding, they changed the game and you need and want that from your subs. Sometimes you do not get the impact that you want, but today they gave us the impact we needed."

Man of the Match - Conor McGrandles

Lincoln were like a rabbit caught in the headlights in the first half, but in the second they turned the game brilliantly back in their favour, and the composure of McGrandles, who was introduced at half-time, was vital in helping them do that.

Lincoln progress to the Sky Bet League One play-off final to face Blackpool, which takes place at Wembley on Sunday, May 30 at 3pm, while Sunderland will remain in the division for the 2021/22 season, which begins on Saturday, August 7.