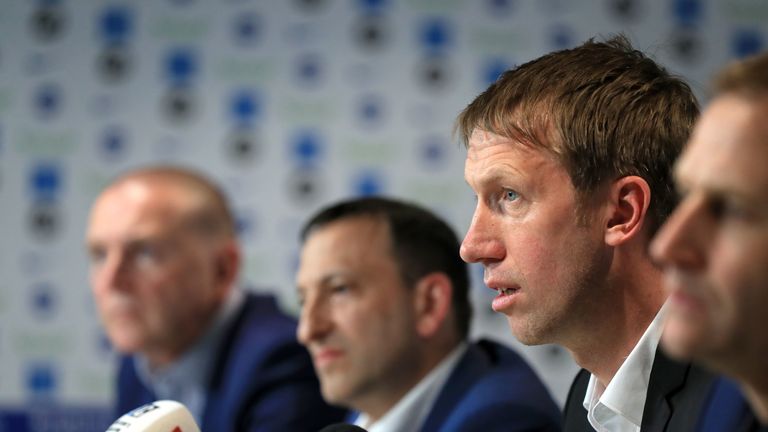 New Brighton manager Graham Potter says he made his decision to take the job after speaking to Tony Bloom, Paul Barber and Dan Ashworth about their vision for the club

Graham Potter has been appointed as Brighton's new manager on a four-year contract after the club triggered a release clause in his Swansea contract.

Swansea had offered Potter, 44, a new contract in an attempt to ward off interest from the Seagulls, who sacked Chris Hughton following the end of the Premier League season.

However, after the Sky Bet Championship side initially rejected Brighton's approach, former Ostersund boss Potter completed the formalities of a four-year deal ahead of being unveiled on Monday afternoon.

Following Potter to the south coast as part of his backroom staff are Billy Reid, Bjorn Hamberg and Kyle Macaulay.

"I was sold by the long-term vision and passion shown by Tony Bloom, Paul Barber and Dan Ashworth," he said.

"The ideas and plans they have for the future of this football club excited me; I am thrilled and honoured to be a part of it.

"This club has been on an incredible journey and my aim along with Bjorn (Hamberg), Kyle (Macauley) and Billy (Reid), is to ensure the great work that has gone before us is built on, as we strive to cement our place in the Premier League for many years to come."

Brighton chairman Tony Bloom had wanted to appoint a new manager as quickly as possible to aid pre-season planning ahead of the 2019/20 Premier League campaign.

Potter had two years left on his current deal at the Liberty Stadium.