"We're facing a huge challenge but it's a challenge we're ready to take on, and we're ready to embrace," says Eddie Howe, striking an optimistic note as he speaks to Sky Sports ahead of a brutal run-in for his relegation-threatened Bournemouth side.

Bournemouth are four points from safety and have a mightily difficult five remaining fixtures, with Thursday's match against Tottenham followed by Leicester on Sunday and Manchester City next Wednesday.

Southampton and Everton round off the list, with Bournemouth knowing they will most likely have to pick up a couple of wins from those games to survive. After five commendable seasons in the Premier League, Bournemouth are facing the real prospect of a return to the Championship.

But context is key and for Howe, who took charge in his first spell at the club with Bournemouth in the relegation zone of League Two after a 17-point deduction, there is still real belief the Cherries can overcome the odds once again.

"It probably is and it probably does," he smiles, when asked if this felt like a key moment in the club's history. "But you look back through previous seasons where we've just kept our heads above the line in the Premier League and it's always been quite tight, and they've been pivotal moments.

"Now this is a pivotal moment - and I'm sure in seasons beyond there'll be pivotal moments in there as well. We just have to stay very present in our next day's training, in our next game, don't look too far ahead and try to enjoy and embrace the challenge."

Reflecting on those early days in the lower reaches of English football's fourth tier, Howe says it was the "togetherness" of his Bournemouth players in 2008 and 2009 which was key to their success, escaping relegation to non-league football and remarkably going on to win promotion the following season.

He feels a similar unity among his current squad, who are facing up to their own defining moments.

"There was a really stern focus on what we needed to do," Howe told Sky Sports via video call. "When I look back to the League Two days, we were all absolutely focused on the team.

"There were no individual agendas, no thoughts of, 'what happens if the worst happens, what's my own situation going to look like?' It wasn't even contemplated. 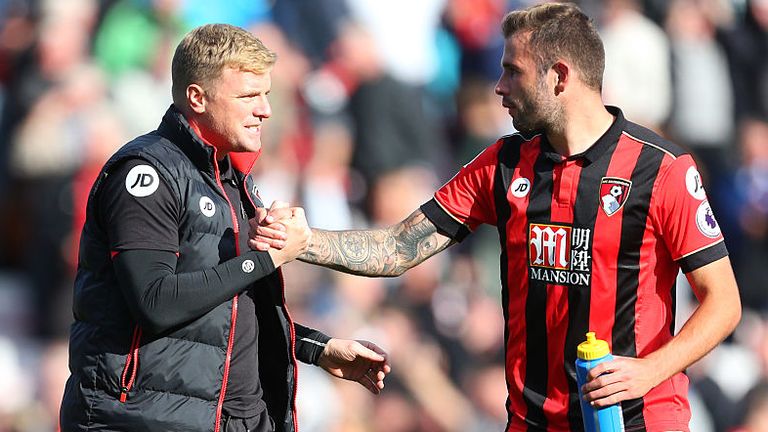 We have a group that care deeply about the team and the club.

"It was all on: 'we will do this, we have to do this' - and then, 'how can I help the team achieve it?'. We're going to need all of those qualities in the next couple of weeks.

"We don't have anyone, that I see and that I hear, that's not focused on helping the team achieve their objectives. Although it's a different group and different individuals involved I still feel the collective is there."

"Our character has been tested to the absolute maximum"

But aside from the spirit, do Bournemouth have the quality and form to conjure up a great escape?

Back at the start of November, a 1-0 win over Manchester United moved Bournemouth into seventh place. But it was followed by just one league victory in the next 12. One draw in eight Premier League games since February has left them in real trouble.

Howe, though, saw shoots of recovery in their 5-2 defeat in the reverse fixture with Manchester United on Saturday. The scoreline looked like a thrashing but Bournemouth led once, could have pulled level at 3-2 and Howe says it was an encouraging return to form for several key players.

Callum Wilson's comeback from suspension to face Spurs will also be a boost - "he's going to be a big player in the run-in" - although Howe backed up Junior Stanislas' verdict that Bournemouth must be harder to beat if they're going to get anything out of Jose Mourinho's side.

"But a lot of that comes down to individuals in the team performing to the level we know they can. I think in recent weeks we perhaps haven't delivered that but Manchester United was a much more positive return for quite a lot of the team, with four or five of the team returning to form.

"Now we need to put that to all 11 because I think that's the only way we can get a result.

"The last run of results has been really difficult to take and our character has been tested to the absolute maximum. I'm hoping to see the benefits of that come out in the next few games because I think it will be just reward for the players' patience and belief in each other."

How to pull off upsets?

While the fixture list looks tough, Bournemouth have shown this season they can upset the big teams. As well as the win over United, they've taken four points off Chelsea and drawn with Arsenal.

They won this fixture against Tottenham last season, too, and Howe says his side have the ability to spring a surprise if they stick to the principles which has sustained their place in the Premier League since their Championship title win in 2015.

"When I look back historically [at our wins over big teams] it's been a willingness to stay in the game," he said. "I think we've defended doggedly, we've been determined, we've stuck to our beliefs and whatever game plan we've had we've delivered it.

"At times we've needed a little bit of luck when the ball has bounced our way and managed to give ourselves a little bit of momentum at key moments. But if we remember those values then we know we're still in control of the game, even if we're playing very good teams." 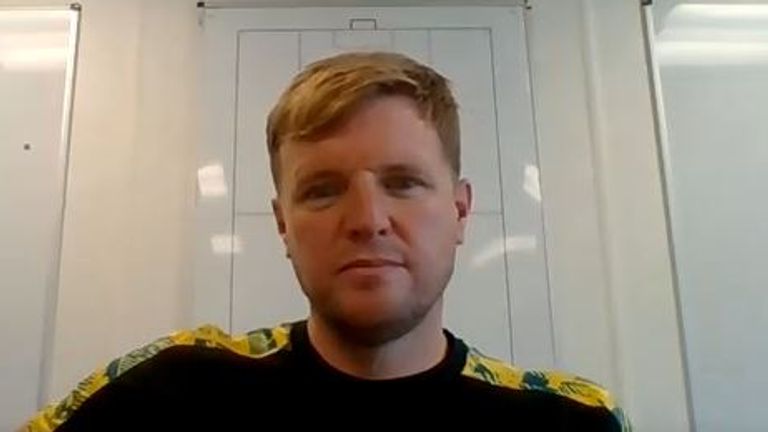 We have enough games and enough points to fight for to shape our own destiny.

That introspective focus will be a key message ahead of the fixture with Spurs. With no fans at the Vitality Stadium to urge them on - "we've missed their drive and energy, missed their emotion" - and tough tests ahead, Howe says Bournemouth's players will have to dig deep inside themselves.

"The temptation is to focus on other teams and that's not a great thing to do, because you're putting your power and your future into other teams' hands. I think it has to be in ours.

"I think we have enough games and enough points to fight for to shape our own destiny and I'd encourage us to do that. We may need a little bit of luck along the way from somewhere else but we have to look at ourselves."