Bradford City management duo Mark Trueman and Conor Sellars sacked; club statement: "Plans are already in place with regards to the vacant managerial position, and the club is not seeking applicants for the role. An announcement will be made as soon as possible"

Trueman and Sellars took over the first team on a caretaker basis in December having stepped up from the U18 side, before being made interim and then joint-permanent managers for the final 19 matches of the season.

Bradford say the pair "have been offered the opportunity to remain at the club in other roles" and that they are "not seeking applicants" to replace them, with "plans in place" and "an announcement [to] be made as soon as possible".

The Bantams ended the season 15th in League Two, having failed to register a victory in their last seven matches.

Ryan Sparks, Bradford chief executive officer, said: "I would like to take this opportunity to thank Mark and Conor for their endeavour and commitment over the past six months.

"Both men were fearless in taking on a formidable task in December, and faced the challenge with everything they had.

"After saving us from potentially dropping out of the division, we wanted a strong finish to the season to give us momentum, heading into next. 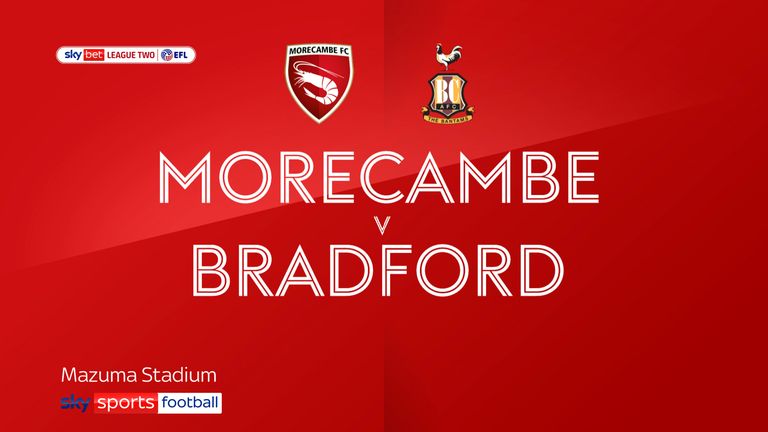 "This has not transpired and one point from a possible 21, in the end, has ultimately seen us settle for mid-table - which is far away from where this club wants and needs to be.

"We feel, at this point, we need more experience to take us forward into the summer and next season which, for us, is a hugely significant one. We have a crucial few months in front of us, and it is important we are in the best possible position to be able to prepare for them.

"Sport in general, but football more specifically, has a dreadful habit of removing good people from its organisations.

"In this case, we are talking about two talented and extremely hard-working individuals - to whom we will now give every opportunity to continue their development while serving Bradford City.

"Their efforts and achievements will be remembered at this club for being unique, all while working within a unique set of circumstances. During their time at the helm, they personified the club's true spirit, and have shown they have potential to become successful first-team managers in the future.

"I thank them for their services to our club and wish them the very best going forward."

📜 CLUB STATEMENT | Mark Trueman and Conor Sellars have been relieved of their managerial duties at the club - with immediate effect.

Trueman added: "It is obviously disappointing to have been stood down as manager, but I respect the board's decision and am incredibly thankful for the opportunity.

"In December, Conor and I took on quite a daunting task which we approached with everything we had.

"We were given the objective of staying in the division at first, which we made sure of with seven games to go. I know football is ultimately a results-based business, though, and recently they had not been good enough.

"I have learnt an awful lot over the past six months and am incredibly grateful to have had the chance to lead a good group of people.

"I would like to thank everyone who supported myself and Conor in the role, and Ryan for trusting, believing and showing faith in us.

"My biggest thanks go to our incredible supporters who have given us everything - from the very first moment. I would hope that, during some dark times throughout this season, we helped bring light and positivity, and some memorable moments in what was otherwise probably a campaign to forget.

"I have been offered the opportunity to stay at the club and fully intend to do so. I hope to have my future decided as soon as possible, and am looking forward to continuing to work hard and develop.

"I wish whoever enters the role next the very best of luck, and will continue to only want what is best for Bradford City."

Sellars said: "I would like to give a massive thanks to the football club, supporters, players and staff for what has been a fantastic experience over the past six months.

"I have loved every minute of the job and, despite my confidence in our ability to help take the club forward, I of course respect the decision made - following a disappointing end to the season - and my time as joint manager has taught me a lot.

"I will always look back at my spell in charge alongside Mark as an honour and a brilliant opportunity to further develop, using the experience moving forward.

"I would like to give my thanks, once again, for the brilliant support, and hope this club can get moving in the right direction."