Bury will not be re-admitted to Football League next season

EFL did "everything in our power" to ensure Bury could compete next season, says chair Debbie Jevans

Bury will not be re-admitted to the EFL next season following a meeting between the 71 member clubs on Thursday.

EFL clubs have also agreed in principle that only one club will be relegated from League Two this season.

Bury were expelled from League One and the EFL last month after the collapse of a proposed takeover following the postponement of their first five fixtures after the Shakers were unable to provide proof of their ability to fund the season.

An EFL statement said: "During today's meeting, the EFL and its member clubs considered and debated a number of options, with all clubs given the opportunity to air their views.

"The debate included consideration of the proposal submitted by the Bury FC Rescue Board for the club to be admitted to League Two under new ownership in season 2020-21.

"Following in-depth discussions, it became clear that the proposal did not have the necessary support and that EFL clubs favoured extending the existing principle of a reduction in relegation across all divisions as a means of returning to 72 clubs now and for the future."

The Rescue Board, chaired by Bury North MP James Frith, had appealed to EFL members to support a "compassionate re-entry" for the club, but their plea fell on deaf ears.

Devastating to hear self-interest was served cold by many @EFL clubs today & their decision to relegate one less from L2 than admit Bury to League. Thank you to all those who spoke in support of it. I’m meeting @forever_bury and others now. Will make further statement later. #UTS pic.twitter.com/ckDQpA0BIw

The EFL's executive chair Debbie Jevans revealed the decision has been taken to ensure fairness for all members of the football pyramid.

"While we are saddened that Bury FC is no longer part of the EFL, the board's difficult decision to withdraw membership was only taken after every opportunity to find a resolution was exhausted," she said.

"Since then, in recognition of the efforts made on behalf of the club, the EFL has engaged with supporters' groups, shared their submissions with our members and debated at length the issues raised.

"Following the discussion [on Thursday], clubs have established that the preferred direction of travel is to reduce relegation from League Two as a means of returning to 72 clubs. The clubs felt that, in a difficult situation, this approach maintains fairness for all members and upholds the principle of the football pyramid."

Bury will now have to apply to the Football Association to be permitted to a league further down the football pyramid from next season (2020/21). An FA board will decide which league.

Meanwhile, the clubs have backed the proposed appointment of former Liverpool and Premier League chief executive Rick Parry as the new EFL chairman.

The statement said: "The appointment will now go forward for formal ratification at a general meeting." 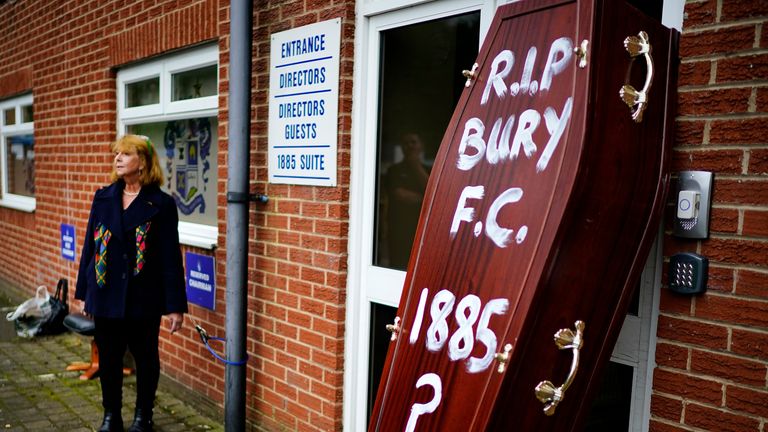 As hard as we tried, we could not get the information required from the owner of the club to allow them to maintain as part of the league

While the EFL did "everything in our power" to ensure Bury could compete next season, according to Jevans, the organisation's executive chair admitted "lessons have been learned".

The body will carry out an independent financial stability review and a "deep dive" into what happened.

"Of course we need to look back and understand, but we did all that we could, I'm very comfortable with that," she said.