The Sky Sports pundits disagreed on five players, Kris Boyd sings the Alfredo Morelos song, and there is a heated debate on Andy Walker's selection of Andrew Considine! Think you can pick a better XI? Scroll down to try our team selector! 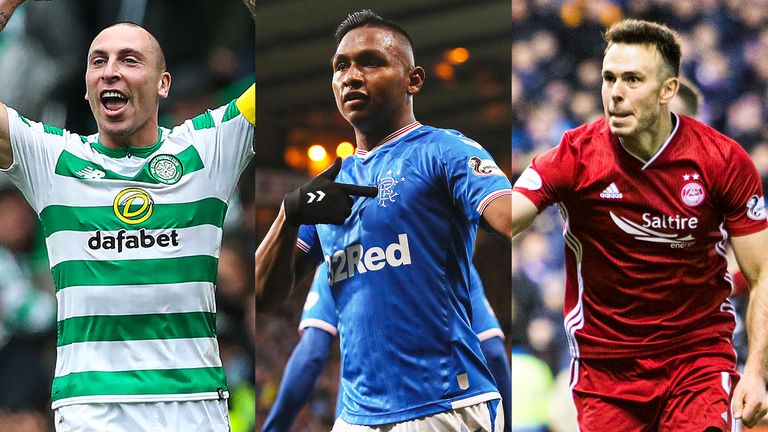 Boyd and Walker clash over their teams of the decade, plus there's some singing!

It has been a decade like no other in Scotland's top flight.

Celtic have dominated in a dramatic and unprecedented decade for Scottish football and are aiming to win their ninth title in a row this season.

However, Rangers' 2-1 win at Celtic Park on Sunday shows they are challenging again after their return from the lower leagues following financial troubles in 2012 and are pushing their Old Firm rivals all the way.

Dundee, Dundee United, Dunfermline, Falkirk, Inverness Caledonian Thistle and Partick Thistle have all come and gone, as has the title of Scottish Premier League with the new Premiership era well underway.

We challenged Sky Sports pundits Andy Walker and Kris Boyd to pick their 'team of the decade'...

I have picked my team based on longevity and success - that is why there are nine players from Celtic - they have hit levels we have not seen before and you could argue all 11 players could have come from there.

There were a couple of close calls; Allan McGregor was pushed all the way by a few players, including Craig Gordon but I went for the Rangers goalkeeper who has shown he is top-class during both spells at Ibrox.

Shay Logan and James Tavernier were contenders at right-back but Mikael Lustig was a standout for Celtic and achieved extraordinary levels of success.

Andrew Considine is alongside him at centre-back after passing the 500 appearances landmark at Aberdeen.

There is no questioning the likes of Virgil van Dijk, Kieran Tierney, Scott Brown, James Forrest and Callum McGregor - they have been exceptional.

Kris Commons slots in on the left - he scored over 60 goals during his time at Parkhead and when you need goals you cannot argue with Leigh Griffiths up front alongside Moussa Dembele, who has gone on to even bigger and better things.

There have been some outstanding players in our top flight over the last 10 years, so I have based my team on ability and picked a back three to accommodate more forwards.

You are only as strong as your strikers and while Odsonne Edouard, Nikica Jelavic, Leigh Griffiths and Kenny Miller will consider themselves unlucky to miss out - I had to go for Moussa Dembele alongside Alfredo Morelos.

Dembele was untouchable during his time in Scotland. He had a swagger about him - he knew he was good but backed it up with his strength, finishing and goals.

Morelos has been outstanding at Rangers and has shown what he can do on the European stage too - who knows how far he will go but I have to pick him.

When you have the Colombian up front who will stretch defences and occupy defenders, putting Steven Davis in alongside Callum McGregor and James Forrest means he would get chances to score goals.

Davis is the best player who has played in that position over the last decade; he has won league titles and is still performing at the highest level - he is exceptional.

With Victor Wanyama behind him alongside Scott Brown - and with David Weir at the back - there is solid defensive cover which the team would need with all the attacking players around them.

Wanyama is the first player in Scotland who played with that style and dominance which helped him move to the Premier League.

I played with Weir and although Madjid Bougherra was close to making it, he provides that level of organisation and experience while the likes of Virgil van Dijk and Kieran Tierney go forward, making sure the team is solid at the back.

Not only that, he is a title-winning captain and kept playing until he was 55!

Pick your team of the decade

Do you agree with Walker and Boyd? If not, using your selections on Twitter @ScotlandSky we have made a shortlist of players for you to pick your own team.

Use our team selector below and send us your teams here!