Ange Postecoglou wants his players to maintain high standards; he will make changes at Easter Road on Sunday; Celtic can go six points clear in the Scottish Premiership; watch Hibernian vs Celtic live on Sky Sports on Sunday, kick-off 12pm

Celtic manager Ange Postecoglou is challenging his players to embrace the "relentlessness" of playing for Celtic after their European exit.

The Scottish Premiership leaders travel to face Hibernian on Sunday, live on Sky Sports, looking to pick themselves up after a 5-1 aggregate defeat to Bodo/Glimt in the Europa Conference League.

Their performances at the first hurdle of the knockout stages were in stark contrast to title rivals Rangers, who hit six goals past Borussia Dortmund to reach the last 16 of the Europa League. 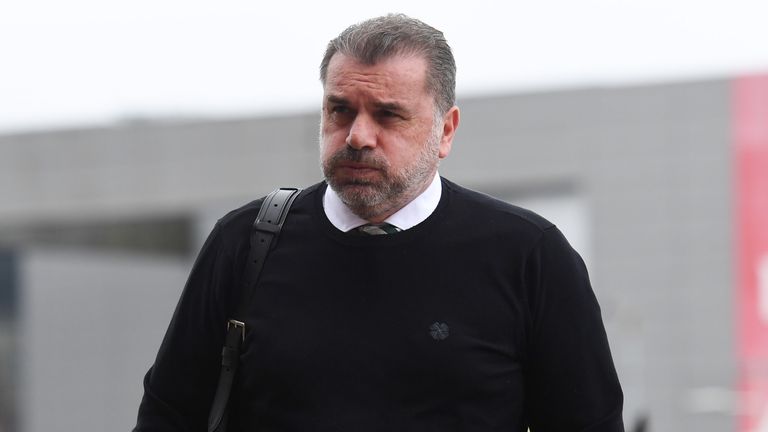 Ange Postecoglou challenges his players to embrace the 'relentlessness' of playing for Celtic after their European exit and looks ahead to Sunday's trip to Hibs.

But Celtic have a chance to move six points ahead at Easter Road before Motherwell visit Ibrox later in the day.

Postecoglou is warning his players they need to be consistent in their performances.

"Most of them are in their first year at the club and they need to understand the relentlessness of it," said the Australian.

"Just because you had a good performance in the last game, or scored a couple of goals, it doesn't give you grace to have an off night.

"My role within that is to hopefully give them the tools and provide them with the support they need to make sure they can rise to the challenge that's here every game."

Postecoglou rang the changes for the defeat in Norway on Thursday night with captain Callum McGregor, Jota and Cameron Carter-Vickers among the first team regulars starting on the bench.

"I was super confident the players we put out last night would get the job done and they didn't," he said

"I thought we made progress through our campaign but I just felt those last two performances were not at the level we had in our group stages.

"That was disappointing and leaves you with a flat feeling. It's obviously not where we want to be in Europe, we want to be better and it's my job to make sure we are."