Alfredo Morelos, Ryan Jack, Leon Balogun and Brandon Barker were all injured at Ibrox on Saturday 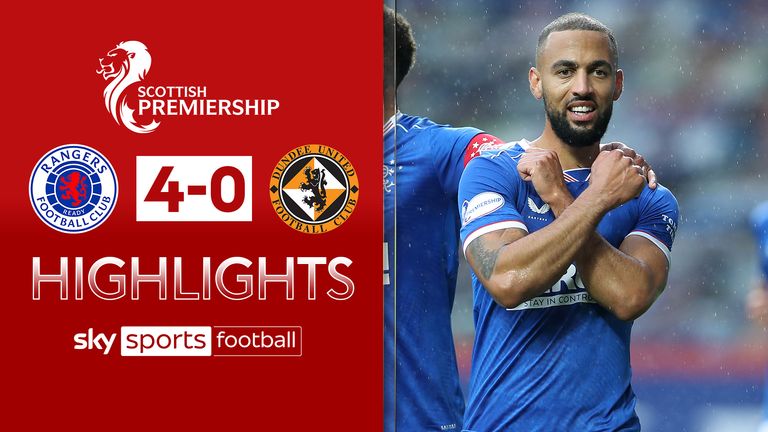 Highlights of the Scottish Premiership match between Rangers and Dundee Utd.

Steven Gerrard admits Rangers need to put the foot down and accelerate their transfer plans after seeing four of his players suffer injuries.

Rangers became the first Scottish side to open a season with seven straight clean sheets as they maintained their three-point lead at the top of the Premiership with a 4-0 win over Dundee United.

But the victory came at a cost after Alfredo Morelos, Ryan Jack, Leon Balogun and Brandon Barker all had to leave the field early.

Balogun was ruled out in the warm-up with a tight quad, while Jack and Barker went down with calf and hamstring issues respectively.

And Gerrard – who confirmed on Friday that Joe Aribo could face another six weeks out with an ankle injury – feared Morelos had suffered even worse damage following a shocking tackle from Dundee United defender Ryan Edwards.

The Colombian had to be stretchered off with a nasty gash but his manager is hopeful he will recover in time for Thursday’s Europa League clash with Lincoln Red Imps.

Yet with his casualties mounting, Gerrard is eager to bring in reinforcements, saying: “I’ve been really clear that we need to add so I think we maybe need to try to accelerate that.

“Going off what I have just seen in the treatment room, there is definitely going to be two, if not three, missing for a couple of weeks. We need to add pretty quickly so that our numbers are OK.

“We have lists that we are pursuing but in terms of names and how close we are, it’s a difficult question for me to answer right now.

“Leon felt tightness in his quad. Hopefully we’ve caught that one early. We could have risked that one but there was no need as we had Fil Helander ready to come in.

“Ryan has a calf problem, which we’ll need to scan to see the extent of that. Brandon has done a hamstring, which is normally at least a couple of weeks.

“And Morelos has got a gash on his knee. From the side, I was worried because it looked a lot worse than a gash. He’s a lucky boy. The doctor is confident if we manage it right over the next few days we might have a chance for Thursday.”

Gerrard refused to criticise Edwards’ challenge, but questioned referee Kevin Clancy’s decision to take no action against the United defender.

“But I’d be very interested to see what the decision would’ve been from the officials had the shoe been on the other foot and Alfredo had made that tackle.”