Alfredo Morelos has been linked with a move to Porto during another summer of transfer speculation surrounding the Colombia striker; Rangers begin Scottish Premiership defence against Livingston on July 31 - live on Sky Sports Football 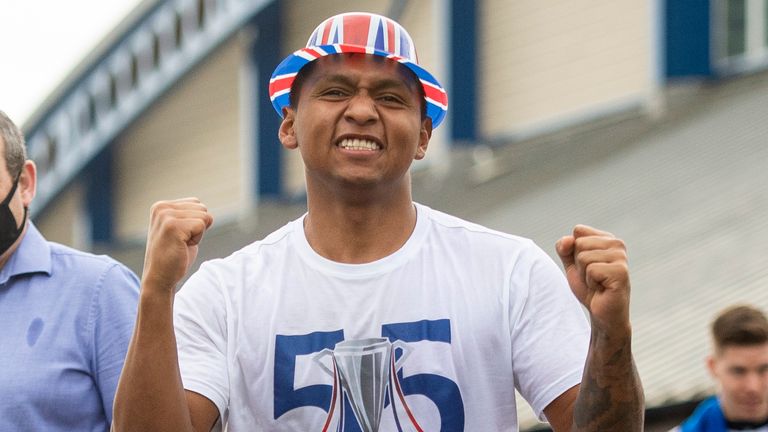 Steven Gerrard says ongoing speculation over Alfredo Morelos’ future is “tiresome” and admits he is unsure when the striker will rejoin the Rangers squad.

The Colombia international, who scored 17 goals in all competitions last season, has been linked with a move to Porto this summer.

Gerrard says he knows the source of the speculation as Rangers continue their preparations for their Scottish Premiership title defence.

Asked about Morelos' future, Gerrard told Sky Sports News: "I don't know, I can't answer that question for you. We want the best version of Alfredo. That is all that we have ever asked for.

"I have read a lot of stuff around Alfredo - I know where it is coming from. I don't know what is going to happen with him.

When pressed whether he was annoyed by perceived involvement from third parties, he said: "No, I am not frustrated. I am very happy, we are just on the back of a fantastic season. I am so excited moving forward into the next season.

"I get asked this question every window, every few weeks because you read more about Alfredo in terms of who he is linked with or where he is possibly going to go rather than talking about what he does on the football pitch.

"So, it is getting a bit tiresome that question now."

Gerrard says his immediate focus is on getting all members of his squad up to speed ahead of their Scottish Premiership title defence but is hopeful of signing a couple of new players.

"The important thing at the moment is to get people up to speed that are already in - Glen Kamara, who has been at a tournament, for example," he said, with friendlies against Brighton and Real Madrid scheduled this weekend.

"Alfredo Morelos is due back at some point, we're not sure when but hopefully he'll arrive when he's ready.

"We've got a few injuries in pre-season we need to get more minutes into their load so they're ready.

"The important thing for me is the players we have in the door at the minute, and if we can in the coming weeks add one or two to the cause we'll be more than ready."

Rangers open the new league campaign against Livingston in front of 17,000 fans at Ibrox on July 31, live on Sky Sports.

The club will then face either Malmo or HJK Helsinki in the Champions League third qualifying round in early August before a potential play-off round, and Gerrard admits reaching the lucrative group stage would be a "monumental day".

"It will be a big help in a lot of aspects and departments," conceded Gerrard. Obviously, the board have been very helpful and supportive of me.

"A lot of people at Rangers have gone deep into the pockets at important times so it will be a fantastic reward for them, first and foremost the supporters who have backed the club immensely, where this club has been from a financial point of view."

Despite his desire to make the progress from Europa League football to the Champions League, Gerrard insists the Premiership remains the "bread and butter" in their priorities.

Tavernier or Patterson? Gerrard happy to have dilemma 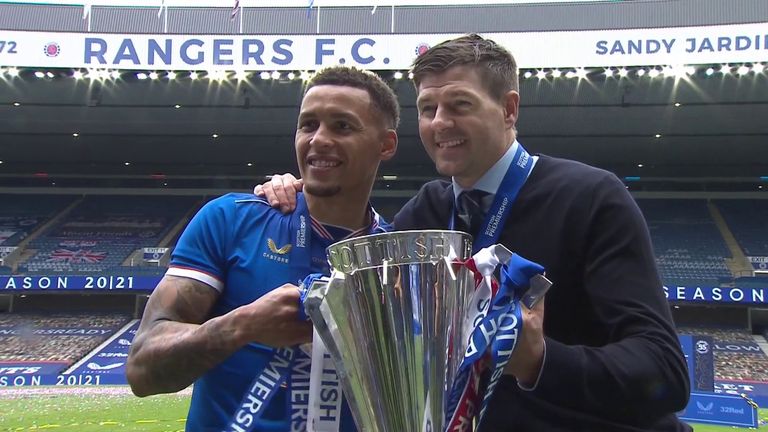 Rangers captain James Tavernier says their standards must not drop if they are to retain their Scottish Premiership title and do well in the Champions League this season.

Gerrard also says he is in a "brilliant position" over having both James Tavernier and Nathan Patterson to select from at right-back.

"Now is probably the first time during the three years where [Tavernier] really has to push himself even more because Nathan is not going to go away.

"Nathan's performances since he has come in have been at a high level and he is not fazed. Nathan will take the challenge to James. I will pick on form rather than reputation."