The Scottish Premiership champions held a meeting with the 46-year-old in London on Saturday as they search for a successor to Steven Gerrard, who left to take charge at Aston Villa on Thursday.

Ex-Holland international Van Bronckhorst flew into the English capital ahead of the meeting before returning on a flight to the Netherlands later that day, and his representatives have told Sky Sports News that discussions were "positive".

Rangers will speak with other shortlisted candidates over the course of this weekend and a clearer picture over who will succeed Gerrard is expected early next week.

Former Aberdeen boss Derek McInnes and ex-Rangers player Gennaro Gattuso are not options being considered by the Ibrox club, despite previous reports linking them with the job.

Rangers sporting director Ross Wilson is leading the search for a replacement, with the club understood to be happy with the strength of candidates and focused on getting the right fit for the job instead of rushing into a decision.

Van Bronckhorst - who also played for Arsenal, Barcelona and Feyenoord - is thought to be keen on the vacancy at Ibrox and last May told Sky Sports "it would be a big dream" to manage one of his former clubs.

The Dutchman led Feyenoord to KNVB Cup success in his first full season in charge, before sealing the Eredivisie title the year after - the club's first in 18 years.

He played for Rangers between 1998 and 2001, winning five trophies, including two league titles.

Rangers are top of the Scottish Premiership, four points clear of Celtic after 13 games of the league campaign. 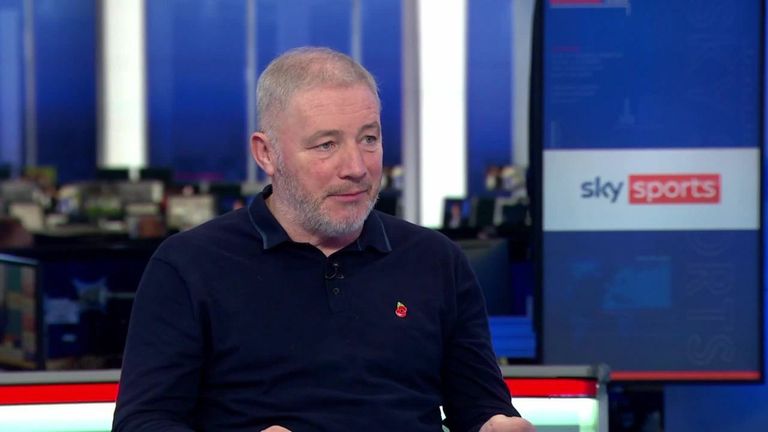 "I like Giovanni (Van Bronckhorst). Good record at Feyenoord, good record in China. Obviously knows the club, knows the setup.

"Played there long enough which isn't a necessity but it certainly doesn't hinder you, if anything it helps you. [He is] young and hungry.

"It is a really attractive job and I just think that is one of the names that will arise in the next two or three days.

"I can't underestimate the importance of getting this decision right because this year's league campaign is vital.

"It is kind of a catch-22 situation because of the importance of winning the title [which] gives you automatic entry into the Champions League, no qualifiers.

"Financially it is vital for whoever wins this league. I understand totally the importance of getting someone in quick and settled, however, it is more important that the right person is appointed." "This is the perfect time for Rangers to snap Gio up.

"He's been with many great clubs in his coaching career, as well as his playing career - Barcelona, Arsenal, Rangers themselves. His coaching career has gone very well: five trophies in four years at Feyenoord, his hometown club, who had not won anything for years.

"It didn't work out in China because soon after he joined, the world was in the pandemic. They wanted him to carry on and backed him but he missed his family.

"Rangers is a club that has been in his heart ever since he joined. He thought it was a fantastic culture and atmosphere, he enjoyed great success there, he enjoyed every Old Firm; he said he's never seen anything like it in football, and working with Dick Advocaat was a great learning experience. He's still got a lot of friends there, he knows the set-up.

"What style of football would he bring? Attacking football. He's a big fan of 4-3-3, he likes to play with wingers. I don't think we'd see a very defensive approach. He's grown up with that attacking style." Former Rangers forward Kenny Miller says Van Bronckhorst is a fine candidate to replace Gerrard as manager, but believes the Dutchman is just one of several viable contenders.

He told Sky Sports News: "On the face of it, Gio looks a good fit. He's had a lot of experience so far as a manager.

"He's a relatively young manager, obviously he's got a long history with the football club and had some successful years under Dick Advocaat.

"As a manager, he's won leagues, he's won cups, so he's had success and is a good fit. I think there's a number of potential candidates who are around at the moment who would definitely be interested in the job."