Monaco have suspended head coach Thierry Henry until a final decision is made on his future.

Henry was only appointed in October 2018 after the departure of his predecessor, Leonardo Jardim - who now looks set to make a shock return to the club.

At a news conference earlier on Thursday, Henry had spoken of making sweeping changes to his team ahead of Saturday's game against Dijon saying: "We need guys who want to save the club, who don't think about themselves. We're going to war."

"Asked who would be left out, he replied: "You will see. There are too many names."

The former Arsenal star managed just five wins in all competitions in his three months in charge of the Ligue 1 team, who are in the relegation zone, two points from safety.

Henry is yet to win a home league game, with their last match at the Stade Louis II ending in an embarrassing 3-1 French Cup defeat to Ligue 2 side Metz. 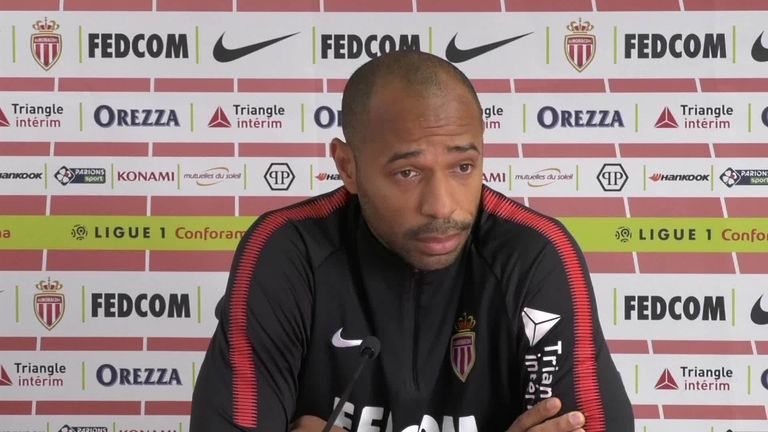 Henry accused some Monaco players of only caring about their own futures, shortly before he was suspended by the French club

Their previous game there resulted in a dreadful 5-1 league defeat to Strasbourg, meaning Monaco have not won at home since May last season.

Henry - who has won just two of his 12 Ligue 1 matches - was forced to apologise for insulting Strasbourg defender Kenny Lala during their recent league defeat.

Television cameras caught the Frenchman shouting abusive language at Lala as he delayed a throw-in with Strasbourg winning 2-1.

Henry's assistant Franck Passi - who had spells as caretaker boss of Marseille and Lille - will take training on Friday ahead of the home league match against Toulouse on Saturday February 2.