Inter surprised at league's accusation and insist health of players, officials and fans are their priority, while Juventus have suspended U23 training over coronavirus fears

Serie A president Paolo Dal Pino says Inter Milan refused to play the weekend's postponed match against Juventus on Monday with doors open to the public.

Five Serie A matches due to take place this weekend, including Juventus vs Inter, were postponed on Saturday due to the coronavirus and have also been rescheduled for May 13.

The Milan club are said to be surprised by Dal Pino's accusation they refused to play the match and insist the health of their players, club officials and supporters is their priority.

Inter also felt a Monday fixture against Juventus would not allow enough time for their players to recover for Thursday's Coppa Italia semi-final second leg against Napoli in Naples. Juventus face Milan in Turin in the other semi-final on Wednesday.

In an interview with La Gazzetta dello Sport, Inter CEO Beppe Marotta said the decision to reschedule the match had "distorted" the fixture list and insisted playing behind closed doors was no longer a viable option.

But Dal Pino says Inter were offered the opportunity to play the match in front of a crowd, something which he claims Inter declined.

"On Friday the CEO Luigi De Siervo and I proposed to Inter to move the match against Juventus on Monday evening to play it with open doors," Dal Pino is reported to have said by Italian news agency ANSA.

"Inter categorically refused to take the field, assume its responsibilities and do not speak of unsporting situations or a distorted championship."

Dal Pino added: "Marotta represents Inter's needs, I protect the general interests of the whole Serie A, which unfortunately suffers from daily conflicts of interest related to each team. 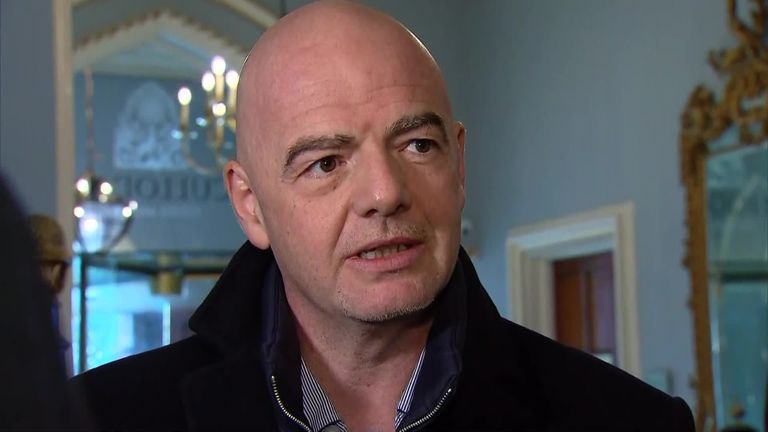 "I have to promote Italian football and his image in the world, so transmitting games in empty stadiums would've been a terrible calling card for the country.

"The decision was down to me, but the clubs involved were contacted by telephone, so we know that they all had positions which were difficult to reconcile.

"We act with a sense of responsibility to protect the fans and the rights of all to attend the games, including the needs of the broadcasters to transmit images of full stands. I invite everyone to think of this as Serie A, not as individual clubs."

A meeting to discuss the issues facing Serie A following the coronavirus outbreak has been scheduled for Wednesday, in which all 20 of the presidents from the clubs will be in attendance.

Italy is the country worst-affected by the coronavirus in Europe with more than 1,100 cases and 29 deaths. Eleven towns in the north of the country are currently in lockdown.

Juventus have stopped training activities involving their under 23 team and put them under medical supervision after three players from Serie C side Pianese tested positive for the coronavirus.

None of the Juve U23s, who were the last opponents to face Pianese, have so far shown any symptoms of the virus.

"The preventive measure was decided upon and is pending further official communications by the health authorities of Alessandria (Hygiene and Public Health Service - SISP) of which the Juventus health personnel are in constant contact with," a Juve statement said.

"A contagion of the COVID-19 which has emerged in the last few hours among the U.S. Pianese players which the Bianconeri played on the 23rd of February at the "Moccagatta" in Alessandria.

"It is specified that, six days after the game, the Juventus players remain asymptomatic and are under medical supervision. Juventus is in constant contact with LegaPro."

Italy PM Giuseppe Conte has issued a decree ordering all sporting events in coronavirus-affected regions until Sunday March 8 must be suspended or played behind closed doors.

Six Serie A fixtures scheduled to be played over the weekend, including the title clash between Juventus and Inter Milan, have been postponed to May 13 - while two games from the previous matchweek, Inter vs Sampdoria and Atalanta vs Sassuolo, are yet to find a new date.

The decree throws into doubt a new number of Serie A fixtures to be played in the cluster regions of Lombardy, Emilia-Romagna and Veneto, including Atalanta vs Lazio, Bologna vs Juventus and Inter vs Sassuolo.

"The Prime Minister Giuseppe Conte has adopted a decree that acknowledges and extends some measures that have already been adopted to contain and manage the epidemiological emergency around COVID-19 and introduces further measures, aimed to discipline in a unitary manner the intervention framework and guarantee uniformity on the whole of the national territory on the execution of preventive care programs," it said.

The Coppa Italia semi-final return leg between Juventus and AC Milan will be played on Wednesday but a regional ordinance from the Piemonte region means fans from the three coronavirus-hit regions will not be admitted into the stadium, effectively banning AC Milan fans from in and around the city of Milan to attend the fixture.

Sampdoria vs Verona postponed until May

Sampdoria's Serie A match against Verona which was due to be played on Monday has been postponed until May 13.

A statement was issued shortly after the president of the Liguria region said the match, to be played in Genoa's Luigi Ferraris stadium, could only go ahead if it was played behind closed doors because of the coronavirus.

It is the sixth out of 10 Serie A matches scheduled to take place between Saturday and Monday that has been called off.

The only games to go ahead in the division on Sunday were Atalanta's 7-2 win over Lecce and Cagliari's 4-3 defeat to Roma.