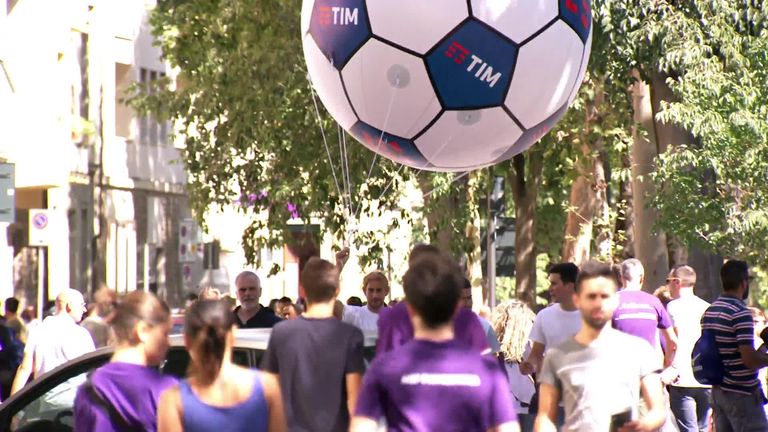 Sky Sports News chief reporter Bryan Swanson reports from Italy where incidents of racism towards players is on the rise.

Kluivert, who has more than 750,000 followers on Instagram, says he hopes companies will introduce identity checks to make users accountable for their posts.

His comments follow a spate of racist incidents in Italy this season.

"People that do that (racist posts) have to, maybe, go to prison," Kluivert told Sky Sports News, in a special report on racism in the Italian game. "It has to stop. It's not on me, I'm not so smart to fix that!"

When asked whether identity checks were needed to remove the anonymity of some accounts, he replied: "Yes, something like that, because you can always see whose account it is or something. I hope so."

Former Netherlands international Patrick Kluivert, his father, revealed he was racially abused by supporters during his spell in England.

Belgium striker Romelu Lukaku was subjected to monkey chants from the crowd during Inter Milan's win over Cagliari on September 1.

A section of hardcore Inter 'ultra' fans, known as 'Curva Nord', have insisted the monkey chants aimed at Lukaku by rival supporters were not meant to be racist.

Inter Milan say they maintain their fight against racism "every day" but would not comment on the statement from fans.

"It's very difficult for a football club to take on its ultras," Tobias Jones, author of a new book titled 'Ultra', told Sky Sports News. "They'd be taking on a group that can shift five, ten thousand people.

"If you annoy them, by calling out certain behaviour, they can decide not to buy tickets."

Fiorentina and Roma fans shared their experiences of whether racism is rife in the game.

"Sometimes the ones that go to the stadium very often say 'it's natural, it's normal' to have an approach like this (racist chants). We should be ashamed." said one Fiorentina supporter.

"I haven't really experienced racism," added another fan. "When it comes to football it brings the whole city together. It's just love."

But a rival Roma supporter revealed: "I saw, in the past, booing to black players."

Another fan claimed: "Racism is all over the world. It depends on your values and education."

Roma striker Edin Dzeko says racism in Italian football is more prevalent than he expected before moving to Serie A.

"It's much more than expected," Dzeko told Sky Sports News after Roma's 4-2 win against Sassuolo earlier this month. "I think something has to come from the (Italian football) federation. They have to protect the players, that's the only way."

Gianni Infantino: 'We must kick out racism'

FIFA president Gianni Infantino called for racism to be kicked out of the game for good at the governing body's awards ceremony in Milan on Monday night.

"I know that tonight is a night to celebrate but there is one thing I would like to say," he said. "I want to say this here, in Italy, in my country.

"But we don't have just to say it we have to fight against it, we have to kick racism out once and for all - in Italy and in the rest of the world, out of football and out of society."