Paris Saint-Germain vs Bayern Munich, Sunday, 8pm. Follow the build-up, action and fallout on the Sky Sports website and app

"You could knock me over with a feather. He's really fulfilled his potential," former West Brom boss Tony Pulis said on Sky Sports when told about Serge Gnabry's four goals in Bayern Munich's 7-2 humiliation of Tottenham in the Champions League in October.

The comments were strikingly different from the those made by Pulis back in 2015 when he had Gnabry on loan at West Brom from Arsenal.

"Serge has come here to play games but he just hasn't been for me, at the moment, at that level to play the games," Pulis said. Shortly afterwards the German was sent back to Arsenal, who sold him on to Werder Bremen for just £4m in 2016.

One wonders what Pulis now makes of Gnabry's incredible form in the latter stages of the Champions League this season, where his strike against Barcelona and double versus Lyon helped fire the German giants in the final and to the brink of a treble.

The 25-year-old has been on a rapid rise. From Arsenal and West Brom struggler to Champions League record-breaker, we look at his incredible journey ahead of Sunday's showpiece final...

He was a player Arsene Wenger always had high hopes for. "Serge Gnabry is a great hope for the future. I rate him highly. If he continues his development, I think he could play in the first team this season," the Frenchman said after signing the German forward back in 2011.

"At the moment, he needs to work and ensure he remains fit." That was always a problem for Gnabry at Arsenal.

He burst onto the scene in just his second year in north London, making his first-team debut at 17 in September 2012, replacing Alex Oxlade-Chamberlain for the final 18 minutes of the Gunners' League Cup tie with Coventry.

A month later he became Arsenal's second-youngest Premier League player behind Jack Wilshere and just four days later he made his Champions League debut for the Gunners, but his real breakthrough came in the following season as he played 14 times for the club in all competitions before a knee injury sustained against Bayern Munich cut his season short.

The injury also ruled him out of the entire 2014/15 campaign, but Wenger refused to give up on his "great hope".

'Not at the level for West Brom'

Despite the injury set-back, Wenger still believed in Gnabry, who signed a new long-term contract with the club in October 2013.

He returned to full fitness for the start of the 2015/16 season and Arsenal sent him out on loan to West Brom in a bid to get him some more first-team experience.

"I'm very delighted by the move," Gnabry said on his arrival at the Hawthorns. "We're delighted to add Serge to our options," Baggies boss Tony Pulis said. "He is a top player and he will bring us quality in certain areas of the pitch."

It looked like a good move for all parties, but what transpired was anything but.

Gnabry's spell at the Hawthorns consisted of just 12 minutes of Premier League football under Pulis, who sent the German winger back to Arsenal after just six months.

"Serge has come here to play games but he just hasn't been, for me, at the moment, at that level to play the games," Pulis told the Express and Star newspaper in October 2015.

Three months later and Gnabry was back at Arsenal. 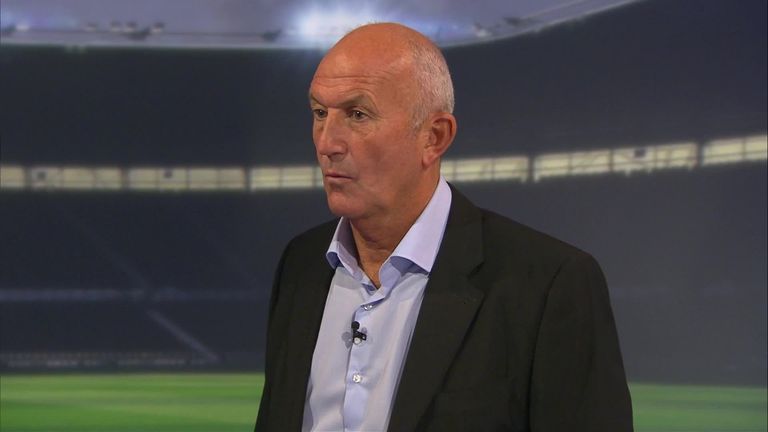 Gnabry returned to Arsenal in the summer of 2016 with an Olympic silver medal after becoming the tournament's joint-top scorer at the 2016 Olympics in Rio.

It was a further example of his potential and the Gunners got straight to work on a new deal for the youngster, with Wenger urging him to stay at the Emirates Stadium. But Gnabry needed a change.

"We didn't want to get rid of Gnabry, we wanted to keep him," Wenger said. "But he was in the last year of his contract. We were close to extending his contract but finally he changed his mind and went to Werder Bremen. But I think we taught him a lot and I think if you ask him he would agree with that."

Gnabry moved back to Germany with Werder Bremen and it proved to be the right decision.

"​It was the right decision [to leave Arsenal]. Everybody who compares my development over the last four months to my time in England before that can't come to a different conclusion. That was the main reason for the transfer - I wanted to get more playing time and it worked.​ Arsenal wanted to keep me, badly. But I had to look after my development"

As a regular starter, Gnabry started to fulfil the promise Wenger had talked about for so long. He scored 11 goals in 27 league games for Alexander Nouri's side, helping them to an eighth-placed finish in the Bundesliga.

His form helped earn him a Germany call-up from Joachim Low and he scored a hat-trick on his senior international debut against San Marino.

But it wasn't just Germany that came calling. With interest from some of Germany's top clubs building, Gnabry activated a clause in his contract which allowed him to leave Werder Bremen less than 12 months after he joined.

Bayern Munich wasted no time in securing his signature for just €8m (£7m), tying him down to a three-year deal at the Allianz Arena.

Fit and firing at Bayern

Gnabry's career at Bayern did not start straight away, with the forward immediately sent out on a season-long loan to Hoffenheim to gain more first-team experience.

But unlike his time at West Brom, this loan spell was a huge success. He made 22 league appearances in the 2017/18 campaign, scoring 10 goals as Hoffenheim secured Champions League football for the first time in the club's history with a third-placed finish.

He returned to Bayern in the summer of 2018 ready to deliver on the biggest stage.

"Gnabry's skills are the kind that Bayern have been looking for, and abilities that Germany will look for in the future. I'm happy he's on our team, and not anyone else's"

"I wouldn't be sat here if I wasn't ready for the challenge," Gnabry said speaking alongside the then-new head coach Niko Kovac at his first press conference as a Bayern player. "I think the best way to see what I can do is just by watching me. I really enjoyed the second half of the season with Hoffenheim because I played as much as possible. Now I'm ready to bring that feeling to Munich."

And how right he was.

Gnabry's career has flourished ever since. In his first season at the Allianz Arena he won his first Bundesliga title as Bayern finished two points above Borussia Dortmund. 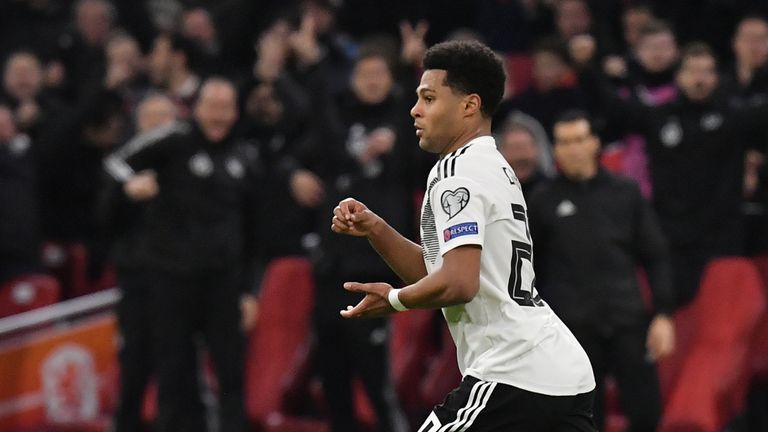 He finished the season as Bayern's second top scorer with 10 goals in 30 matches behind Robert Lewandowski and continued to impress on the international stage with Germany. He now has 13 goals in 13 games for the national team.

"Gnabry will always play under me"

The return to north London

And then there was the Champions League night at the Tottenham Hotspur Stadium.

He showed everybody what English football was missing when he became only the second German to score four or more goals in a Champions League match (alongside former Bayern forward Mario Gomez) in a 7-2 hammering of Arsenal's rivals.

Wenger knew though, didn't he? 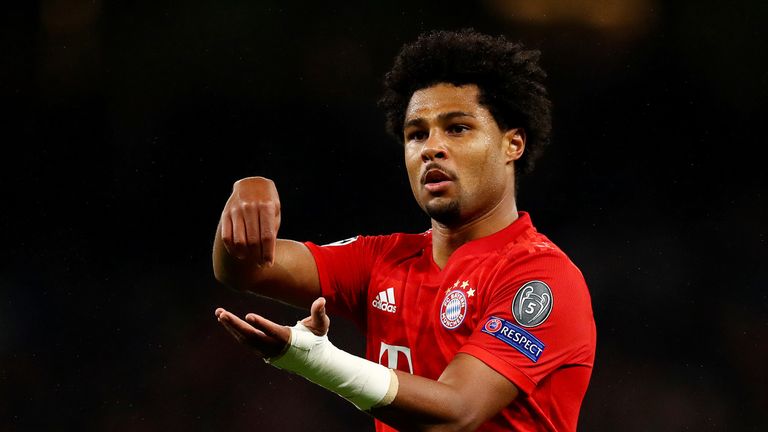 Gnabry scored four goals as Bayern beat Spurs 7-2 in the Champions League, but head coach Niko Kovac was more pleased with his defending

"He has technical ability, he has power, he has pace, he has finishing quality and he can give a final ball," the Frenchman said describing Gnabry back in 2013.

On his first return to north London since leaving Arsenal, Gnabry had Wenger's words ringing in his ears as he produced a display of scintillating speed, sublime skill and clinical finishing to score four second-half goals as Bayern hit seven past Spurs.

He received plaudit after plaudit for his performance, but the endorsement from former boss Pulis might have pleased him more than any other.

"I'm amazed [to see him perform so well on the European stage]," Pulis told Sky Sports. "I had him at West Brom, we took him on loan and we could never get him fit - he even got taken off in an U21 game. He went back to Arsenal, they sold him on. He was a good kid, a nice kid.

"He's really fulfilled his potential," he added. "You could knock me over with a feather. Having worked with him at West Brom and seeing him there - what he's done is absolutely amazing. When people show what they can do and really knuckle down and become so good - as he's done - it's absolutely fantastic."

Since that fine display in north London, Gnabry has kicked on again. There were two more goals in the capital when he and Bayern dismantled Chelsea in the first leg of their Champions League last-16 tie and with 23 goals in 45 appearances for Bayern in all competitions so far this season he has become a key figure at one of the biggest clubs in the world.

And on Sunday night, in the Champions League final, he could achieve something which few predicted when he couldn't get a game at West Brom.

A version of this article first appeared on the Sky Sports website in October 2019.