Liverpool head coach Jurgen Klopp on double goalscorer Diogo Jota: "He's turned into a world-class striker, and that's really helpful for us. I don't think a lot of people saw him in that position for the second goal, but Trent and he finished it off - absolutely outstanding."

Jurgen Klopp hailed "world-class" Diogo Jota after his double saw Liverpool past an Arsenal side whose manager Mikel Arteta was left "concerned" by his side's discipline.

Jota made light of the absence of Liverpool big-hitters Sadio Mane and Mo Salah in a man-of-the-match performance at the Emirates Stadium, scoring both goals and giving Takehiro Tomiyasu a torrid time on the right of the Gunners defence from first whistle to last to see the Reds into next month's Carabao Cup final. 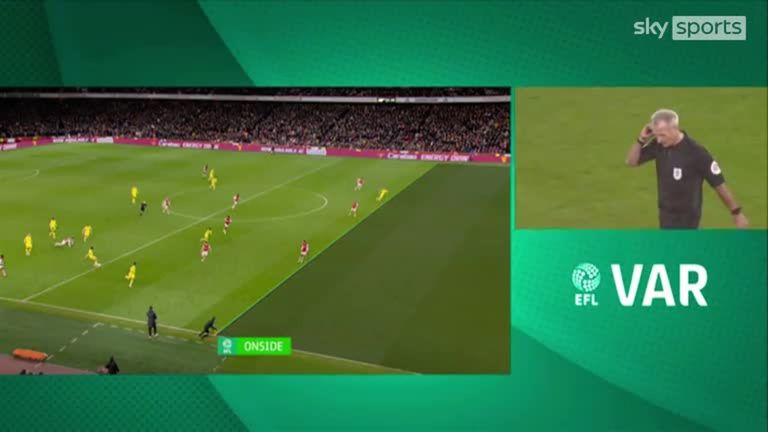 The brace took him to 14 goals in a Liverpool shirt this season from only 22 starts in all competitions, and left head coach Klopp regaling the talents of a player whose £41m price tag drew some scorn when he first joined the club less than two years ago.

"We were completely convinced when he arrived he'd help us massively," he told Sky Sports. "There's so many things before you sign a player, nowadays you can watch 100 games, we were really confident but since he's been here he's made another step. He's turned into a world-class striker, and that's really helpful for us. 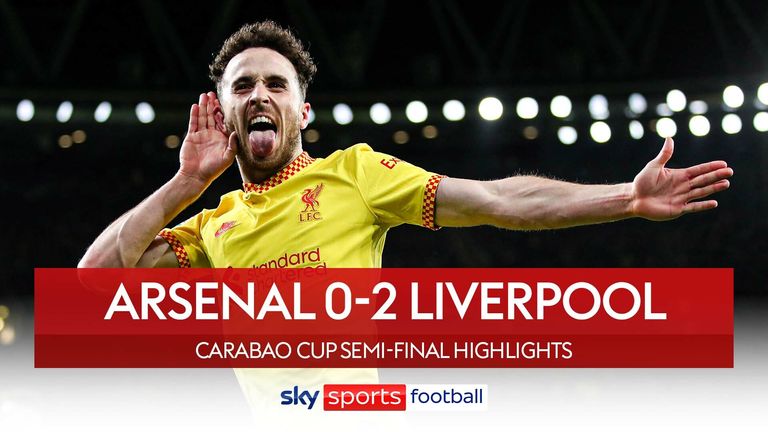 "We scored two wonderful goals, Jota was on fire, but the passes too. I don't think a lot of people in the stadium saw Diogo in that position for the second goal, but Trent did which was helpful and he finished it off - absolutely outstanding.

"We're over the moon. It's a difficult game, a difficult time generally, we just have to get through it. We try everything we can, and what the boys did tonight against a really strong Arsenal side was really exceptional. 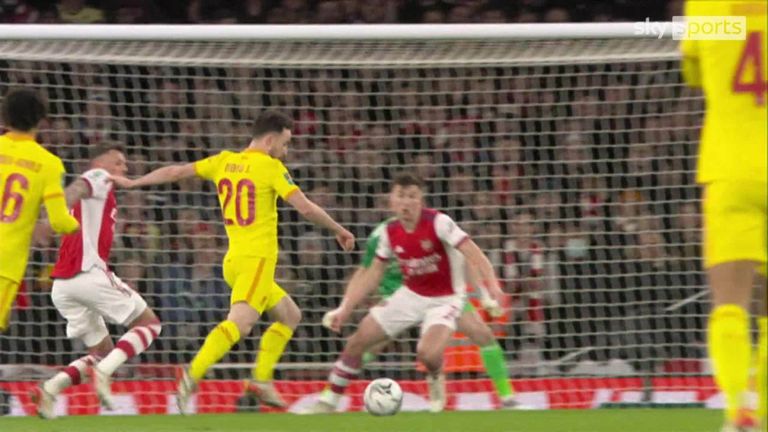 "Arsenal were pretty lively at the start of both halves, we calmed it down, played good football, didn't create a lot but with their quality it's not easy."

'Kelleher is a top-class goalie'

Speaking the morning after Liverpool secured their place in their first Carabao Cup final for six years - and ahead of Sunday's trip to Crystal Palace, live on Sky Sports - Klopp was keen to reflect on the progress of Caoimhin Kelleher, who he says has gone from being a "skinny boy" to a "top-class goalie".

The Republic of Ireland international kept a clean sheet at the Emirates after deputising for Alisson, and Klopp said: "He is No 2 at Liverpool - I don't think you can be rated much higher at the age he is. We are more than happy with him.

"When I arrived here and saw him first time - a skinny boy from Ireland standing in his big goal - I was like, 'OK, this could take a while'.

"Since then he made incredible steps and now he's a top-class goalie. Calm like you cannot believe, good with the ball, and, on top of that, he makes incredible saves." 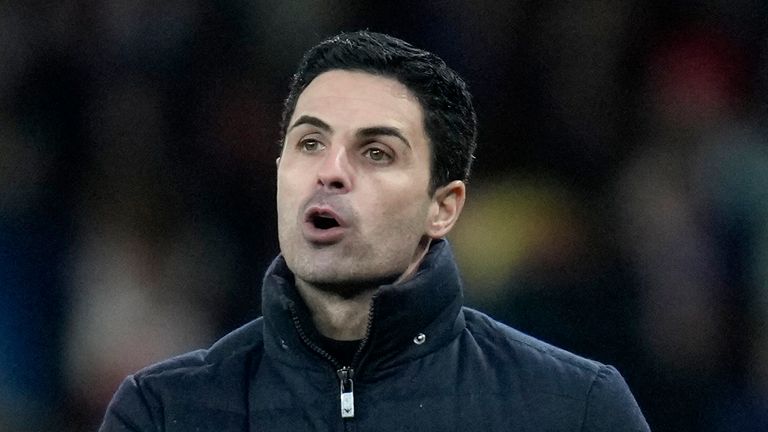 Mikel Arteta said Arsenal did not take their chances and were punished by Liverpool in the 2-0 defeat, in a game that saw yet another red card for the Gunners

The game was already gone by the time Thomas Partey earned two yellow cards in three minutes shortly after coming on, but left Arteta facing questions as his team racked up a 14th red card in barely two years since he took the reins at the Emirates.

Partey had flown back from the Africa Cup of Nations earlier on Thursday and while Arteta denied the associated fatigue played any part in his laboured challenges, he admitted he was concerned about the ill-discipline of his players. Eight of the 32 defeats Arteta has suffered as Arsenal manager have come in games where they have finished with less than 11 men on the pitch.

He told Sky Sports: "We've played the last three games with 10 men. At this level, that's extremely difficult to win football matches. We'll keep trying to do what we do, but there have been some decisions which haven't happened going the other way. Today is a good example as well.

"I regret I can't use him now. He made the effort to come and play, Emile [Smith Rowe] hasn't had one single training session, [Alexandre Lacazette] had a yellow card, we had to make a decision and decided to use him.

"I don't think [the red card was related to his travel from AFCON]."

Partey: I should be more intelligent not to get in a challenge when already booked 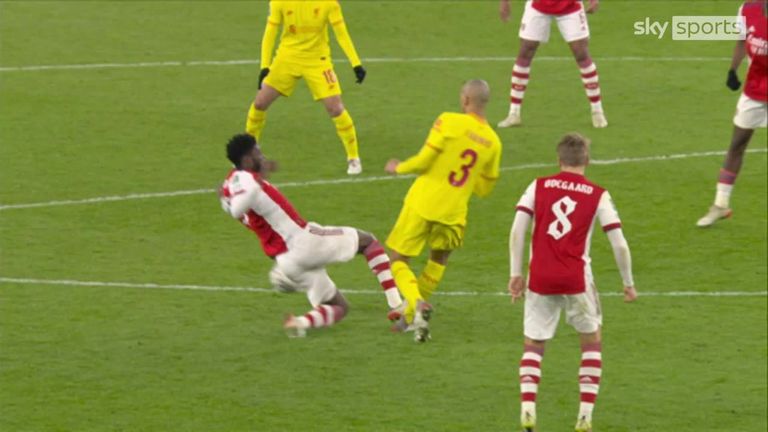 Partey has apologised for his red card against Liverpool on Thursday night.

Partey was a substitute having only just returned from AFCON duty with Ghana and was booked twice in the space of three minutes.

He wrote on Instagram: 'I am responsible for anything that happened and will take all the critiques.

"I should be more intelligent not to get in a challenge already booked but this is my personality. I like to fight for every ball.

"I love this club and I love my country even though things sometimes don't happen how I wanted. I would continue to work harder and make things right.

"I came back with the mentality to make myself available for the team to get to the final but it did not happen as planned.

"I will continue to give my all when I am on the field of play because this is my life and this what I chose to do.

"I am not happy with all that happened yesterday and at the AFCON but I understand only with hard work things will change so I will continue to work hard to change this. Thanks." 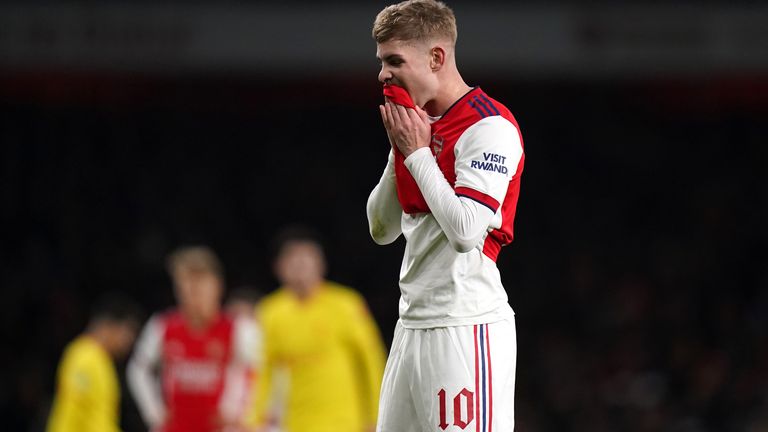 Former Arsenal midfielder Paul Merson told Sky Sports fans would have to be patient with the young team they have been presented with - which included nine players aged 24 or under in its starting line-up - and put their sluggish performance down to nerves as some of the Gunners' brightest lights failed to shine with a cup final beckoning.

Emile Smith Rowe and Bukayo Saka struggled to exert the same influence which has won them acclaim this season, and though Gabriel Martinelli gave Trent Alexander-Arnold a tough time on the Liverpool right, he had little to show for his own night's work.

"These young kids have got the chance to play at Wembley in a cup final, there's going to be nerves," he said. "It's alright saying they're internationals, but they're playing for their club now, in front of their own supporters and they want to get to a cup final.

"For me, when they retire, they'll want to say they won medals and trophies. It was an opportunity but they got nervous tonight. It's weird to say it but they froze.

"They didn't live up to their potential. And this is the problem Arteta has - this is a young team and one minute they're up there and then down there and that is the problem. When you're a bit older, you're at a seven or seven and a half every week, not a nine then a four. That's what Arteta has got at the moment.

"Arsenal fans have to be patient with that. They're bringing youngsters through and you want that, but that's what is going to happen. You just didn't hope it was going to be in the semi-final of a big competition. It's a shame really."

What's next for Arsenal and Liverpool?

Both sides are back in Premier League action on Sunday at 2pm. Arsenal host Burnley, while Liverpool travel to Crystal Palace for the first part of Super Sunday, live on Sky Sports Premier League from 1pm.