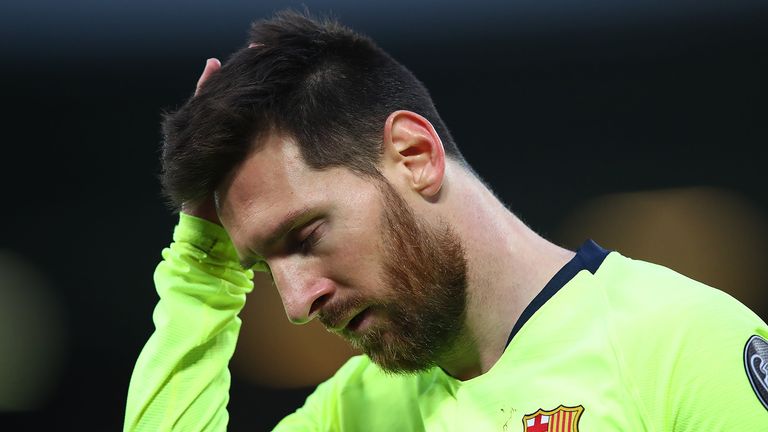 Lionel Messi insisted the Barcelona players, not coach Ernesto Valverde, are to blame for their dramatic Champions League defeat to Liverpool

Should Barcelona get the better of Valencia in Saturday's Copa del Rey final, they will complete the domestic double for the second year in a row.

However, in the Champions League, Barca have been humiliated two years in a row after seeing commanding first-leg leads overturned, first to Roma in last season's quarter-finals, before their 3-0 semi-final first-leg advantage mattered little as they succumbed to a 4-0 defeat to Liverpool on a famous night at Anfield - a match Messi, making a rare appearance in front of the press ahead of the Copa del Rey final, cannot forget in a hurry.

"I had a great first season as captain, apart from the Liverpool game," Messi told reporters. "Regrettably, that game has tainted the season.

"I haven't watched the game again, it was very similar to Roma where we went into the game and suddenly they scored. We reacted well, then they [Liverpool] scored the second goal and we didn't compete, the worst thing is that we didn't compete. We let them walk all over us.

"We were all thinking about being champions and we were all very disappointed, first for the elimination, second for the manner, third for the fact it happened again.

"It was a very tough blow to take and it was tough to lift ourselves up, you could see that in the next few games.

"Now we have a final, a chance for a trophy, we have the chance to do a double and finish the year well, we have to win it like every final we play in."

'Valverde not to blame'

Coach Ernesto Valverde has come under intense criticism since the Liverpool defeat, despite the success he has enjoyed domestically, but Messi believes it is the players who deserve the blame for such a capitulation.

"I truly think our coach did an extraordinary job all this time he's been with us," Messi added. "I think he was practically blameless for what happened with Liverpool.

"We are solely responsible for what happened during that game. We knew that we couldn't repeat what had happened last season, and yet it happened again. We left a very sad impression and we played so badly.

"This is something that can happen once, but not twice and even less so consecutively. Missing the chance of playing a Champions League final, something we wished for so much - what happened was inexcusable.

"The coach may have his share of responsibility the same way everybody else, but I have no doubt that we, the players, are the main ones to be blamed."

Messi likened the Anfield defeat to the 1-0 extra-time loss to Germany he suffered as Argentina captain in the 2014 World Cup final in Brazil.