Barcelona suffer one of the heaviest defeats in their history; Bayern will face Man City or Lyon in Champions League semi-finals on August 19

In an incredible Champions League encounter, Bayern Munich decimated an insipid Barcelona to reach the semi-finals, winning 8-2 in Lisbon.

The pressure on manager Quique Setien has grown exponentially after one of the heaviest defeats in Barcelona's history while Bayern look to be the team to beat in the Champions League.

The tone was set early on as Thomas Muller - making his 113th Champions League appearance - scored inside four minutes, but it was soon cancelled out by a freak own goal from David Alaba (7). The first-half floodgates then opened as Ivan Perisic (22), Serge Gnabry (28) and Muller (31) netted in quick succession.

Setien bought on Antoine Griezmann at the break and there was a glimmer of hope for Barcelona when Luis Suarez made in 4-2 in the 57th minute, but it was short lived with half of Bayern's goals still to come.

After a sensational solo run from Alphonso Davies, Joshua Kimmich (63) slotted home the fifth before a late glut of goals embarrassed an abysmal Barcelona even further. Not to be left out, Robert Lewandowski (82) saw his goal given after a tight VAR review.

Barcelona loanee Philippe Coutinho then netted a late double (85, 89), with the eighth and final goal drawing an angry reaction from a number of the Barcelona substitutes, who displayed more passion than any of their team-mates on the field over the 90 minutes.

Bayern will face either Manchester City or Lyon - who play on Saturday evening - in the Champions League semi-final on August 19.

How Barcelona were humiliated in Lisbon

In the first half, all five goals were scored inside 31 minutes and it began when Muller found the net in the fourth minute. He played a sensational give-and-go with Lewandowski after being picked out at the top of the area by Perisic before easily sweeping home into the far corner.

But not long after, a freak own goal from Alaba saw Barcelona level in a period where they had looked dangerous on the attack. A long ball picked put the run of Jordi Alba down the left and his fizzing cross - aiming for Luis Suarez - was turned home by the Bayern defender as he attempted to send the ball over the top of the net.

Man of the match: Thomas Muller.

There were errors from both sides early in the first half but soon, Bayern started to take advantage of Barcelona's mistakes as the floodgates opened.

In the 22nd minute, Sergio Roberto gave the ball away too easily as Gnabry nipped in to take the ball from his feet. He then picked out Perisic down the left wing who saw his likely cross diverted into the back of the net by Marc-Andre ter Stegen's foot.

Gnabry was next to get in on the scoring act and it was more delightful play from Bayern. Thiago weighed up his options in midfield before slotting the ball to Leon Goretzka, who send the ball into Gnabry's path with his first touch. The former Arsenal winger then used his physicality to round Clement Lenglet with worrying ease before hammering a low shot into the far corner.

Three minutes later, Muller added his second as Barcelona crumbled. A loose header from Gnabry was picked up by Joshua Kimmich on the right wing. His inviting low cross was waiting to be turned home and Muller did just that, tapping the ball past his international team-mate Ter Stegen. There was a brief VAR check but the goal stood.

Barcelona were given the smallest of comeback chances 12 minutes after the break as Suarez managed to beat Neuer. Lionel Messi's sumptuous long pass picked out Alba on the left, when then cut it back for the waiting Suarez. He then nipped around Jerome Boateng before hammering the ball past the goalkeeper, but there was not a long wait for the next Bayern goal to arrive.

It was a sensational solo run from Davies that set up the fifth Bayern goal. He picked up yet another loose Barcelona pass in midfield, slalomed past two opposing players before driving down the left wing. He left Nelson Semedo for dust using his skill and pace before his fizzing cross was turned home by the incoming Kimmich as Barcelona tried to keep Muller and Lewandowski quiet.

But it was a Barcelona player who came back to haunt them in the final 15 minutes as loanee Coutinho was introduced along with Niklas Sule. After some neat play on the left with his Bayern team-mates, Coutinho spotted some space to run in to before chipping a ball past Semedo for Lewandowski to head home. There was a VAR check for offside but the goal was given.

It was then Coutinho's turn to hit back at his parent club with his Barcelona future very much undecided. He was once again offered too much space on the left of the area as Muller tapped the ball into his path, which the Brazilian poked home with a lunged toe between two Barcelona defenders. There was a small fist pump after in a muted celebration.

Coutinho netted the historic eighth goal in the 89th minute. Thiago floated a chip into the area, which Lucas Hernandez nodded into the middle for the Brazilian. He controlled with his left leg before smashing home with his right to compelte the Barcelona humiliation, which prompted an angry reaction from the substitutes' bench.

It rounded off a truly dire Barcelona performance, who conceded eight goals in a game for the first time since losing 8-0 to Sevilla in the Copa del Rey in 1946.

Man of the match - Thomas Muller

In all honesty, you could have had your pick of any Bayern player on Friday, but it was a special night for Muller. He made his 113th Champions League appearance - the most of any German player in the competition's history - and set his team on their way to the most incredible of wins.

He took his first goal well and played a wonderful give and go with Lewandowski, with the two proving to be quite the fruitful strike partnership. He was in the right place at the right time for his second - turning home a fizzing cross - and rounded everything off with an assist for Coutinho.

Now, he has the chance to fire his boyhood club to another Champions League title - their first in seven years - with Bayern most certainly the favourites to win the competitions after their decimation of Barcelona. 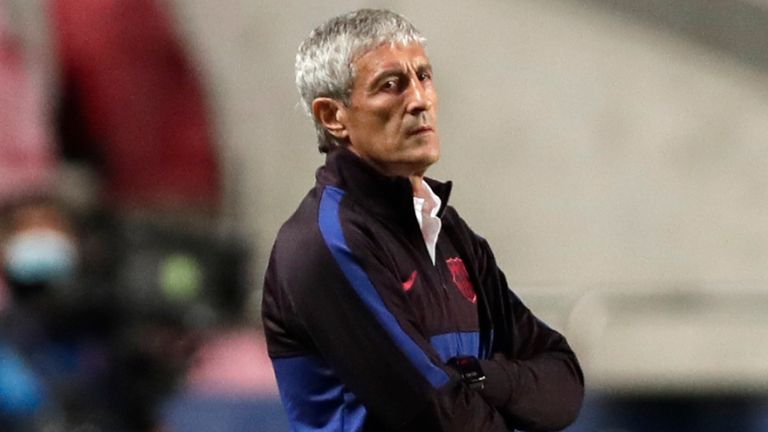 Under-pressure Barcelona head coach Quique Setien says the club 'must recover' from an 8-2 defeat to Bayern Munich eliminated them from the Champions League.

Friday's capitulation was the clearest sign yet that it is the end of an era at Barcelona. The Pep Guardiola revolution, the brilliance of Lionel Messi and all of those trophies seemed like a distant memory by half-time. It does not often happen in football, but Barcelona got a taste of some of the thrashing's they have dished out over the years.

It has been an unhappy season at the Nou Camp for many reasons. Despite a positive start, they began to unravel in December and January, including a run of only one win in five match - unheard of for a club of Barcelona's stature. Ernesto Valverde was replaced by Setien but things did not improve too much - they were knocked out of the Copa del Rey, finished five points behind Real Madrid in La Liga with a four-month football suspension in between and have suffered one of the biggest defeats in the club's history.

The average age of tonight's starting XI was 29 years and 329 days, the oldest Barcelona team they have ever named in the Champions League and it showed. There were bright spots in the opening 20 minutes which indicated a competitive game, but once Bayern went 2-1 ahead, Barcelona lost all their confidence and fight, ability to defend well, keep and pass the ball effectively or even just to communicate.

This year's semi-finals will also be the first time since the 2004/05 season that neither Messi or Cristiano Ronaldo feature. While they both remain two of the best players to have ever stepped onto a football field, the end of their own personal reign has coincided with Barcelona's own.

Not since 1946 have Barcelona conceded eight goals in a game and it is the first time since April 1951 they lost by a six-goal margin. The horrible records go on and there is one thing for sure - Barcelona need one mighty overhaul which will take much longer than a summer transfer window and new blood throughout the club. Their legacy depends on it.

Bayern will face either Manchester City or Lyon in the Champions League semi-finals on Wednesday, August 19. The two teams meet in their quarter-final on Saturday evening, which you can follow across Sky Sports' digital platforms.