Paris Saint-Germain host Manchester City in Champions League semi-final first leg on Wednesday; first meeting between Mauricio Pochettino and Pep Guardiola since the former was sacked by Tottenham in November 2019; both coaches bidding to reach first Champions League final with their clubs

Paris Saint-Germain manager Mauricio Pochettino says his Manchester City counterpart Pep Guardiola is the best coach in the world as they prepare to renew their rivalry in the Champions League semi-finals on Wednesday.

The pair have locked horns before, both on the pitch and in the dugout, lining up against each other in their playing days for city rivals Barcelona and Espanyol before going on to manage their respective clubs.

They were in opposition in the Premier League during Pochettino's five years at Tottenham. The Argentine took Spurs to the Champions League final two years ago, knocking Guardiola's City out in the quarter-finals.

"For me, he is the best," Pochettino, who replaced Thomas Tuchel as PSG boss midway through the season, said.

"I admire him and think he is doing a fantastic job. He is an amazing coach, always thinking of different strategies and game-plans. I love to challenge him and the teams he prepared.

"Not only the best manager. The club is important, too. A club that trusts you to build a team and provides you with all the tools."

Tuchel guided PSG to their first Champions League final last season, where they lost 1-0 to Bayern Munich in Lisbon.

But Pochettino believes that defeat will give his side added motivation to return to the final at City's expense, saying: "We now have the experience but we need to go step by step.

"Now, we have to beat Manchester City and it is going to be really, really tough."

The first leg of the semi-final will be played in Paris, with the return leg in Manchester on May 4.

The 2021 Champions League final will be held in Istanbul on May 29.

Neville: Pep could be the all-time greatest

Gary Neville believes Manchester City are "out of this world" and could have the greatest manager in the history of the sport.

City claimed their fourth successive Carabao Cup trophy with a 1-0 win against Tottenham on Sunday and are set to claim their third Premier League title in four years.

Guardiola's side could even complete the Treble after reaching the Champions League semi-finals, and Neville said: "You just have to recognise Man City's outstanding football, the outstanding achievement of winning this trophy four times on the bounce. 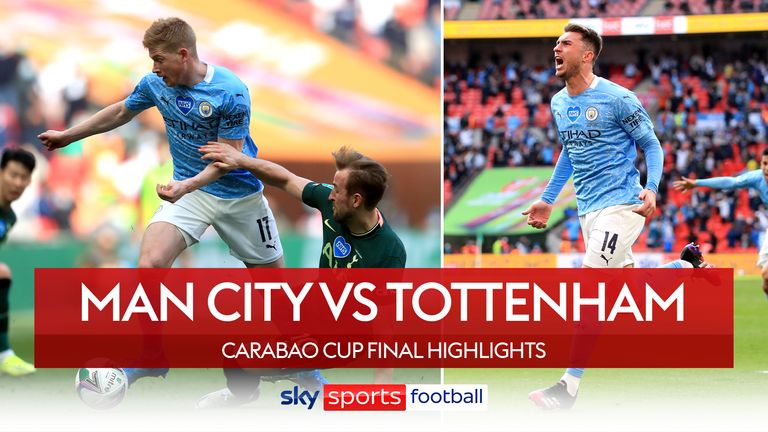 FREE TO WATCH: Highlights from Manchester City's win over Tottenham in the Carabao Cup final

"Pep Guardiola has an outstanding record in cup competitions, it's 14 victories and one defeat in 15 finals, it's absolutely out of this world. The football they play is magnificent, it really is.

"I think Man City may have the greatest manager of all time and we'll look back in 10, 15, 20 years' time… just the way he has infiltrated countries, dominated football but also influenced others, I don't think I've ever seen it.

"You look at how he's won in three different countries, he's now dominating in this country - he's going to win the league title in the next few weeks, that's three in five years and these are massive achievements.

"Playing the way they play as well, which is with technical players, dominating possession. The big one is the Champions League and it's a huge couple of weeks coming up against Paris Saint-Germain because if they were to win that, then they would have a great chance.

"That would be the cherry on the icing on the top of the cake of Guardiola's reign at Man City because I don't think he can leave without winning it. It would feel incomplete if he left this country without winning the Champions League.

"I know that happened in Germany, but here, Man City will give him the time to do it and it almost feels like he has to so he can say that the job is done."