Liverpool leave it late to beat Ajax 2-1 in their Champions League Group A match thanks to Joel Matip's 89th-minute header; Jurgen Klopp says team was unrecognisable from the debacle in Naples; Anfield had earlier paid its respects to The Queen

Joel Matip's late header earned Liverpool a 2-1 win over Ajax as their Champions League campaign finally had lift off at Anfield.

Beaten badly by Napoli last week, the scrutiny on Jurgen Klopp's side looked set to be amplified when Mohammed Kudus cancelled out Mohamed Salah's opener early on. But Matip rose to head home with minutes remaining to win it for Liverpool.

European nights at Anfield are often stirring occasions but the emotions were a little different on this occasion following the passing of Queen Elizabeth II on Thursday. No Champions League anthem. Instead a moment of silence, that was impeccably observed but for a few isolated shouts from a handful of supporters. The action took centre-stage thereafter and Liverpool's attacking play was encouraging from the outset. Diogo Jota was lively up front in his first start of the season. Thiago helped the team rediscover a little of the rhythm that had been lacking during his recent absence.

It was Jota who was the architect of the opening goal of the game, feeding a pass through to Salah who did the rest. The Kop had been chanting the Egyptian's name just before, willing him to end a run of four games without a goal. Their faith was rewarded instantly.

But although further chances fell to Luis Diaz, Jota and Salah, there was a familiar weakness on show too. Kudus' equaliser came from nowhere in one sense but from an entirely predictable source in another - Liverpool's right flank again, so often so open.

Such is the trade off with Trent Alexander-Arnold. The right-back was soon showing what he could do at the other end, forcing a double stop from Ajax goalkeeper Remko Pasveer. Virgil van Dijk might have done better with his headers too. The goal just would not come.

Those wasted opportunities almost proved even more costly when Kudus came close to a second goal on the counter-attack after the break before Daley Blind headed just wide of the far post with Alisson beaten. But it was Matip who had the final word.

This was not quite the reinvention of Liverpool that Klopp had hoped for. In fact, it could even have been a damaging defeat had Ajax not spurned those sporadic chances in the second half. But the Liverpool manage could not hide his delight afterwards.

And with good reason. This was huge. One point from two Champions League games going into a double header against Rangers would have been fraught with difficulty. Now there is some relief, some optimism, and maybe something to build the season on.

The atmosphere had been a little subdued in the early part of the game but it reached a crescendo in those closing moments and that was a credit to Liverpool's ambition. Klopp threw on the attacking substitutes and was rewarded with the winning goal.

It was not a substitute who scored the goal but Liverpool's depth did make a difference and they will hope to have more players fit and fresh following the international break. The rhythm is not quite there yet but that goal still felt like a big moment in their season. The Liverpool manager had called for a response from his players after that humiliating defeat in Naples and though the winning goal came late he got it.

"I think if we put the two games next to each other you would not recognise it as the same squad. Braver, more ready, everything was better.

"I think the story of the game is kind of typical. We played a lot of good stuff against a strong side, full of confidence, absolutely convinced by how they play, and we caused them a lot of problems.

"We are 1-0 up and we concede with the first chance of the opponent. That is what I mean by typical. A proper setback. The reaction was OK [but] the pressing was not as convincing as before.

"That is what we tried to do in the second half. It was clear we had to keep trying to play football. We did that really well.

"Sometimes you have to wait a bit longer. It was a set-piece but I don't think that was a surprise. The face of Joel showed exactly how we all felt." 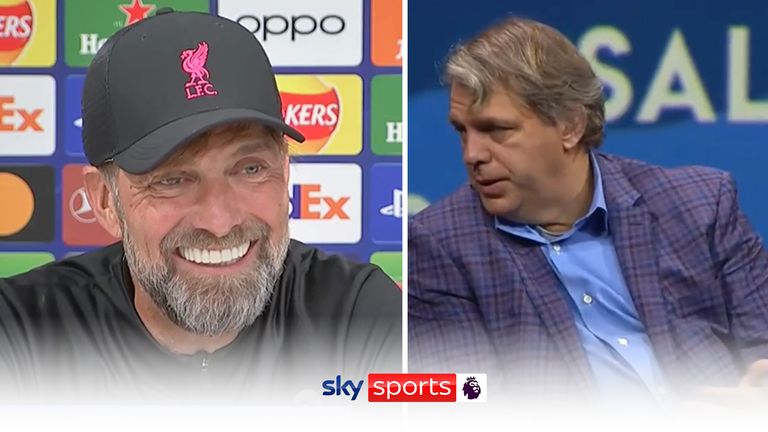 Klopp also commented on Chelsea owner Todd Boehly's suggestion of a Premier League 'All-Star' game between the north and south of England.

"When he finds a date for that, he can call me," said the bemused Liverpool boss.

"In the big sports in America, they have four-month breaks. It is completely different in football.

"Does he want to bring the Harlem Globetrotters as well?

"I am not sure people want to see that. Did he really say that?"

Liverpool do not have a Premier League game at the weekend following the postponement of their trip to Chelsea. They return to action on the first day of October when Brighton are the visitors to Anfield. Their next Champions League fixture follows that when they play host to Rangers on October 4.