Chelsea kickstarted their stuttering Champions League campaign in emphatic fashion with an impressive 3-0 win over AC Milan at Stamford Bridge.

The Blues went into the game bottom of what looked to be a tame Group E after a defeat at Dinamo Zagreb in Thomas Tuchel's final game in charge and a draw at home to Red Bull Salzburg on Graham Potter's debut.

But the hosts are now just a point off table-topping Salzburg and will be feeling much better about their chances of qualifying for the knockout rounds after dismantling the Italian champions, who they face at the San Siro in the return fixture on Tuesday.

Chelsea took a deserved lead into half-time thanks to Wesley Fofana's first goal since his £70m switch from Leicester and had the game tied up just after the hour mark after strikes from Pierre-Emerick Aubameyang and Reece James.

However, Potter admitted after the game he is "concerned" by the knee injury sustained by Fofana shortly after his goal, which forced the defender off the field in the first half and saw him leave the stadium on crutches.

The prospect of reigniting their European campaign with two fixtures against AC Milan in just six days appeared daunting but Chelsea will head to the San Siro next week full of confidence after a thoroughly convincing win over Stefano Pioli's side.

In fairness to Milan, they were missing key players in goalkeeper Mike Maignan and rampaging left-back Theo Hernandez, and they did start brightly in west London.

But Chelsea quickly asserted their control and could have scored within five minutes when Mason Mount saw his curling effort from the edge of the area tipped behind by Ciprian Tatarusanu.

The home fans did not have to wait too much longer to celebrate the game's opening goal, though, when Fofana coolly slotted home after Thiago Silva wreaked havoc from consecutive corner kicks (24).

The only negative for Chelsea came shortly after when Fofana collided with Rafael Leao and hobbled down the tunnel.

The Milan forward - who Todd Boehly was reportedly keen to bring to Stamford Bridge in the summer - played a key role in setting up Milan's best chance of the night, taking out multiple Chelsea players with a rapid run into the box before squaring for Rade Krunic, who hit Kepa Arrizabalaga with his first attempt and then blazed his second over the bar.

That was the only moment of panic for Potter's side, who doubled their lead shortly after the break thanks to Aubameyang, who lost Fikayo Tomori a little too easily before turning home James' cross (56).

The wing-back then added his name to the scoresheet with a rasping finish at Tatarusanu's near post (62), after which both sides appeared to know the game was as good as over and attentions turned to the rematch in Italy on Tuesday.

Eyebrows may have been raised when Ruben Loftus-Cheek's name appeared on the Chelsea teamsheet as one of the two central midfielders as Potter reverted to a 3-4-3 formation.

Conor Gallagher remained on the bench despite stealing the show on Saturday with a brilliant winner at Crystal Palace, as did Jorginho - who picked up a knock at the weekend - and summer signing Denis Zakaria.

Playing alongside Mateo Kovacic, Loftus-Cheek was handed the not insignificant task of filling in for the injured N'Golo Kante. The fact that Chelsea have failed to keep a clean sheet since the Frenchman picked up his hamstring problem nearly two months ago shows how tough a job that is.

But, in a performance that may have caught the attention of Gareth Southgate as he ponders his midfield contingent for the World Cup, Loftus-Cheek shone as Chelsea produced their best performance of an inconsistent season.

The 26-year-old - who was a member of Southgate's squad in Russia four years ago - used his muscular frame to assert physical dominance over Milan's midfield and ended the match with more duels won (10) than any player on the field.

Loftus-Cheek also won possession for his side on nine occasions - a figure only James could better among either side.

The Chelsea academy graduate spent the final months of Tuchel's reign filling a variety of roles, including wing-back and right-wing, but showed the heart of midfield remains his strongest position and, in doing so, repaid the faith shown in him by his new head coach.

Potter: James can be a Chelsea legend 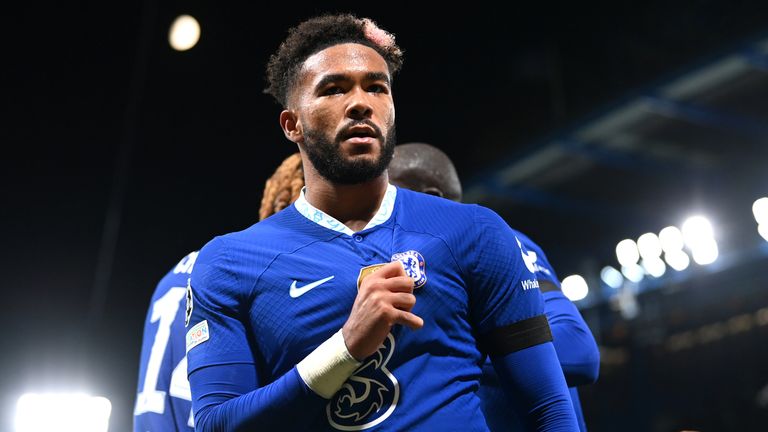 James was another Chelsea player to be utilised in numerous positions by Tuchel but Potter has been more consistent in his usage of the England international, playing him as either a right-back or right wing-back in all three of the matches he has taken charge of so far.

They are the positions the 22-year-old - who signed a new six-year Chelsea contract earlier this season - appears most comfortable in, with wing-back, in particular, a role that seems to bring the best out of his physical, attacking and defensive abilities.

After setting up Aubameyang's goal with a fine cross, James added his second goal of the season shortly after to crown a magnificent display in which he kept the much-hyped Leao quiet for much of the evening.

Potter was suitably impressed, saying: "I think Reece is just a fantastic player and he's a young player, so he's developing all the time. He'll get better and better as we go.

"I've really enjoyed working with him - he's got a lot to offer.

"He can play any game in the world, he's just tremendous. My job is to try to help him reach his potential because his potential is beyond the sky.

"We love him. He's so important for us. He could be a Chelsea legend - that's the potential he has."

However, Potter acknowledged the "one disappointing thing" for Chelsea was the injury to Fofana, who has a history of knee issues and was sent to the USA for a medical before completing his transfer in August.

"We don't know yet," Potter said about the severity of Fofana's injury. "That's the one disappointing thing about the evening. We need to scan tomorrow and fingers crossed.

"I wouldn't want to speculate on it now but we're concerned. He's a young guy, he's a strong guy and we'll help him and support him. We're hoping for the best."

Reece James showed why he should be England's first-choice right-back at the World Cup with another exceptional performance.

Mason Mount and Raheem Sterling produced good displays and can be confident of their places in Qatar, while Ben Chilwell got another solid start as he bids to finally return to his best.

Ruben Loftus-Cheek hasn't played for England for nearly four years but, with Kalvin Phillips injured and doubts over whether Jordan Henderson can handle matches every four or five days, Gareth Southgate could do worse than cast an eye over the midfielder following his effort against Milan.

Conor Gallagher was limited to a cameo from the bench and there was disappointment for Fikayo Tomori, who is battling for a spot on the plane to Qatar but underwhelmed on his return to Stamford Bridge, when he was particularly culpable for losing Aubameyang as Chelsea scored their second.

Chelsea return to Premier League action on Saturday against Wolves, with kick-off at 3pm at Stamford Bridge.

The Blues then travel to Italy for their return game against AC Milan on Tuesday, with kick-off at 8pm.